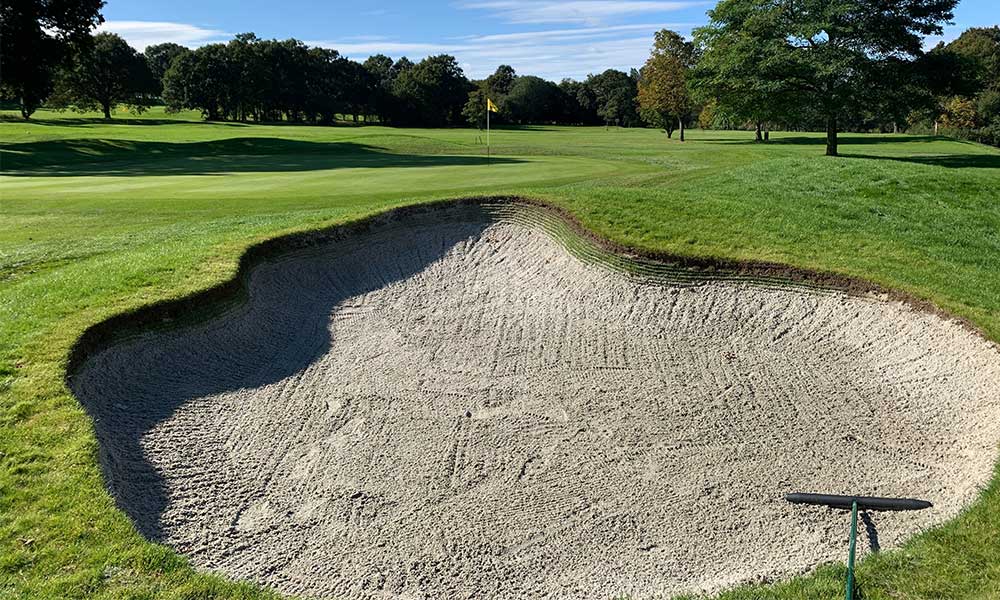 Several years ago, the club engaged a leading golf course architect to undertake an audit of the course bunkers, along with a masterplan proposal and recommendations on bunker styling and strategy. In the autumn of 2020, Hartsbourne decided that the time was right to act upon this professional advice and invited EcoBunker to demonstrate how it could deliver the architect’s vision.

“Hartsbourne first made contact with us about eighteen months ago,” says Darren Clewes, EcoBunker’s head of sales. “Firstly, we reviewed the architect’s design intentions then walked several of the holes with club officials. After that we demonstrated the products that we considered would deliver what they needed. Later we took them to see the EcoBunker work at The Army GC, where our full range of edging, liners, and irrigation products had been deployed, before agreeing on contractual details. We agreed to do a phase one project on two holes, the eighth and ninth, which together have ten bunkers. Our team, guided by former Walker Cup player and greenkeeper Llewellyn Matthews, started on site on November 30, 2020, and during the work, we added two more bunkers on the second hole.”

On the completion of phase I, EcoBunker and the club agreed to move straight on with phase II, four more bunkers on the third hole. Phase III, another twenty bunkers, meant that the entire front nine was completed by the end of March 2021. Summer 2021 gave the Hartsbourne golfers a chance to enjoy the new bunkers, and while the feedback was overwhelmingly positive, it was course manager Simon Watkins who noticed the biggest difference. “For many years, our regular bunker preparation work was intensive, but I now have clear evidence that the EcoBunkers only require the attention of one man whereas previously we needed four men to deliver the same quality. The saving in man-hours has been incredible,” he says.

After detailed planning, Phase IV, which will see the whole of the main 18 hole course completed, will start before the end of October. Again, EcoBunker will be acting as lead contractor, providing all the engineering design, project management, earthworks, shaping, drainage, bunker liner, and edge construction plus irrigation work.

“Llewellyn and his guys are really enjoying this project, delivering a first-class outcome for a knowledgeable and supportive client. Everyone understands that this is a team effort and as part of phase IV our staff will be training the club’s own greens crew so that the academy course can be done in-house,” says Clewes.

EcoBunker welcomes inquiries concerning its system, which is patent-pending and invites anyone interested in it to make contact via ecobunker.co.uk.