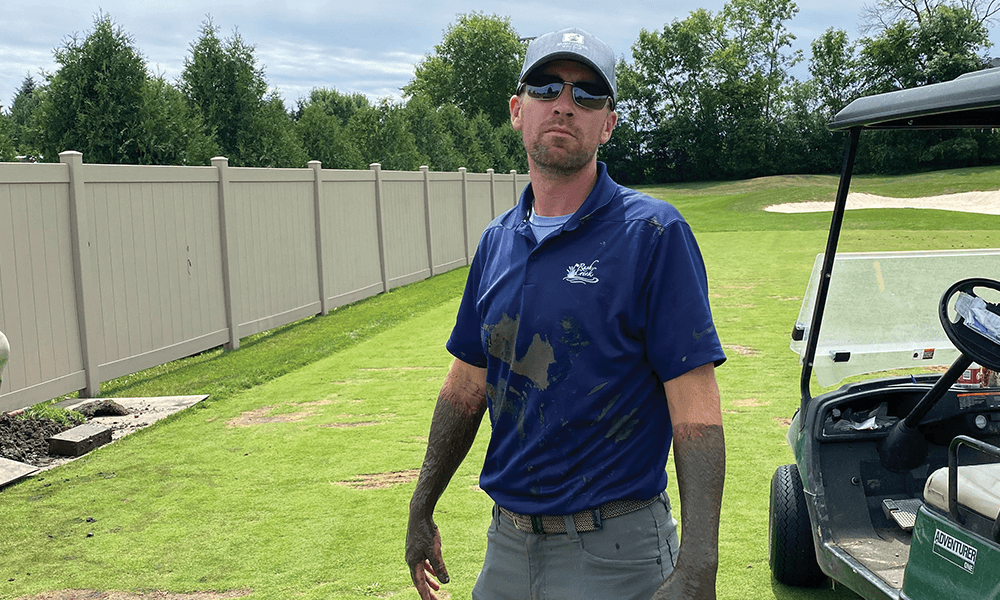 Golf Course Superintendent Matt Cavanaugh is a self-professed goofball. He’s also educated, accomplished, and has an extensive golf industry background. He credits the combination of all these factors for his success as the head guy who makes “grass grow” and keeps playing conditions optimal at Rush Creek Golf Club.

Rush Creek is a public-play course with the persona of a top private country club. Located approximately twenty miles from downtown Minneapolis, the 18-hole championship golf course was designed by Bob Cupp and John Fought. The course’s restaurant, the Highlander, helps add to the facility’s appeal. Locals come to enjoy dinner in front of the stone fireplace or on the terrace, taking in spectacular sunset views. The venue is popular for weddings, meetings, parties and even funerals and memorial events.

This quality championship course has hosted three LPGA Tour events and the 2004 US Amateur Public Links Championship. Each year, between mid-April and early November, the course sees around 30 to 35,000 rounds of golf on its 18-hole course and another 6 to 10,000 rounds on its 9-hole course. And like other courses across the U.S., in 2020 and 2021, those numbers were even higher as golfers returned to the game in record numbers.

Fueled by its robust junior program, there’s no reason to expect a drop-off in rounds of golf at Rush Creek in the years ahead. “Our junior golf program,” explains Matt, “is amazing. There are about 1200 kids in the junior program every year, and activity is non-stop. One of the best things we’ve ever done here is to build our short, par-three course, the Mac Nine. Since the course opened in 2012, it has completely changed Rush Creek.

“Just the number of young people that are coming through Rush Creek, learning the game of golf, is incredible. And when you have kids on the course, it brings out their parents to go to the restaurant or golf on the championship course. It’s pretty unique to have a junior program this size, and it’s really been a lot of fun for Rush Creek to have a junior program that just grows and grows.”

A Course Maintenance Career that Began with Junior Golf

Matt’s career as a golf course superintendent took root when he himself was a junior golfer. In 1995, at age fifteen, Matt began working as part of the maintenance crew at a golf course near his home. His objective was a summer job where he could play free golf. The following summer, he returned to the same job at the same course. By the time he was a senior in high school, Matt knew golf course industry was meant to be his life.

He headed to Kansas State, where he earned a Bachelor of Science degree in Horticulture and Turfgrass Management. “I was terrified when I got to Kansas. I was a city kid, and there I was at an Ag school. I was the only student on campus not wearing a big belt buckle and cowboy boots. But I made great friends at Kansas State. And I would go back to Minnesota in the summer to work. I even did an internship at Rush Creek, where I learned a lot and realized what a good place it would be to work because they treat people right.

“But when I graduated from Kansas State, Rush Creek didn’t have a position open. I took a job at nearby Medina Golf and Country Club here on the west side of the Twin Cities for a year, and when a job opened up at Rush Creek as an assistant, I took it, working from 2003 to 2011.

Matt received his Master of Science, Applied Plant Science, Turfgrass in 2009, and then, he made a surprising career move, leaving the golf course and going to work in sales for PBI Gordon.

“I had a great sales role, and I loved it. They took a chance on me, a longtime assistant with zero sales experience. The job was wonderful, great people and a great company. I highly recommend that golf course assistants and golf course superintendents spend time in product sales. If we did sales first and then became golf course superintendents second, our industry would be much better for it. When you are in product sales, you gain so much in-depth knowledge not just about the products you represent, but about the competitor’s products.

“As golf course superintendents, we get locked into our own golf courses. You tend to feel that when you have something bad going on, you’re the only one. It really opened my eyes, and my growth in product knowledge was exponential. I’m a better superintendent for doing that now.”

One More Detour on the Way Back to Rush Creek

Matt might has spent the rest of his career in sales had it not been for his little boys. When the travel his sales job required kept him away from his family more than he wanted, Matt took a job as a research scientist for the University of Minnesota studying turfgrass. Although he was honored to work with Eric Watkins and the team at the University of Minnesota, after two years, Matt returned to Rush Creek, again as an assistant. But this time, he knew that when the superintendent’s role became available, it would be his.

Building a Strong Crew and Then Keeping Them Around

Matt is quick to give kudos to his team for maintaining the high standards Rush Creek demands. Assistant Golf Course Superintendent Kevin Milbrandt and Betsy O’Donnell, along with Turf Equipment Manager Dennis Berning, are key players on his team. Every year, he seasonally adds twelve to fifteen high school and college students along with an equal number of retirees and approximately six workers who come from Mexico on an H2B visa program.

Unlike many golf course superintendents, Matt never struggles to find workers. He has a waiting list of people who’d love to work at Rush Creek. His enthusiasm for his job appears to be contagious.

“When your job is to grow grass for a living,” says Matt, “you have to mix things up and keep them interesting for the workers. Once we get the retired guys, they never leave.

“We’re also fortunate to be able to pay competitive wages for our area. That helps. And then, I tell students that I am really looking for people who want to commit to working three consecutive summers. I am very upfront with them. That helps me justify the investment in training them.

“The whole goal is just keeping the job fun, not burning people out, keeping the roles unique and different every day. The result is keeping people challenged. That works for us. I make it clear, ‘You’re not just going to hold a weed whip the whole summer. You’re not going to be stuck in bunkers all summer long.’

“Also, they never work more than five days in a row. And I’m not asking them to work crazy weekends. I ask for three weekend days a month and I hire enough people so that schedule works for us.

“For our crew from Mexico, Rush Creek actually bought a house near the golf course. The workers pay rent, but we keep it affordable, and they don’t have to worry about where they will live or how to work out a six-month lease. The same guys come back each year, and some of them leave a car behind in the garage. We keep it running for them, and that helps them out.”

A Golf Course is Only as Good as its Crew

If you’re thinking Matt Cavanaugh has found the secret to success as a golf course superintendent, you may be right.
As Matt explains, “I try to show my passion for the job to the people around me through my goofiness. For both the full-time and the seasonal crew, it’s all about keeping the job flexible. And, of course, there are those silly Monday videos we do that you see on Twitter. Our crews plan for and look forward to those videos all week. When people’s job is growing grass for a living, part of my job is making their work fun.”

Linda Parker has been writing professionally since the 1980s. With clients in finance, sports, technology, change enablement, resorts, and nonprofit global initiatives, Linda helps organizations communicate their stories in meaningful ways to the people they most want to reach. She has authored, ghostwritten, or contributed to more than a dozen nonfiction books. Linda is a member of the Authors Guild and the Golf Writers Association of America. You can connect with her at linda@glindacreative.com.