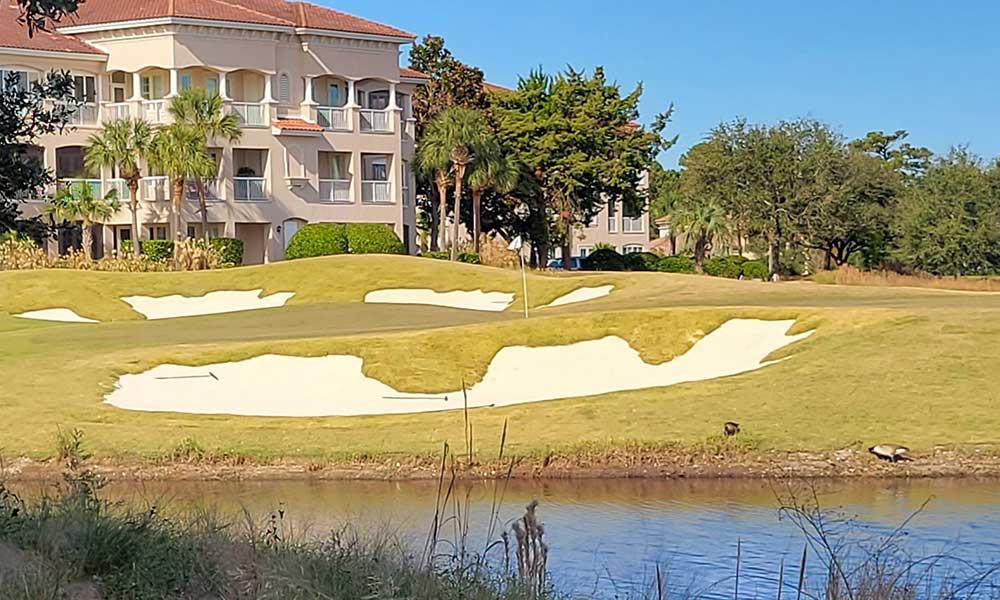 Severe weather events are a fact of life for golf courses in the south-east of the United States. Whether it be rainstorms, high winds, or both at once, course superintendents in the region know they’re coming and just have to deal with them. But there are ways of making dealing with the weather easier, as Kevin Przybylski, course superintendent at Grande Dunes in Myrtle Beach, South Carolina, has found out this year.

Opened in 2001, and designed by architect Roger Rulewich, Grande Dunes is now part of Founders Group International, which owns and runs 21 courses in the Myrtle Beach area. Since its foundation, the course’s bunkers have not been rebuilt at all, and, says Przybylski, they had lost a lot of their original appeal. “The bunkers were rather lacy-edged when they were built, but had changed into more circular shapes as a result of two decades of edging,” he explains. “They are quite steep-faced, with high lips, and they tended to get a lot of contamination from native soil after major rain events. Our site is quite sandy, but even so, getting them back into playable condition after weather took a lot of time and manpower.”

Przybylski and his bosses therefore resolved to rebuild the bunkers – also to restore its greens – and hired Pennsylvania-based contractor Henderson & Company to handle the build. Architect John Harvey, who had worked with Rulewich at Grande Dunes back in 2001, returned to the course to oversee the work, ensuring that the bunkers were put back to their original style. And the team chose the Capillary Bunkers liner system to ensure maximum playability from its 39 bunkers.

Concrete was poured into the first bunker at the end of July; the project will be finished in early December. “The installation is easy – the product goes into the bunkers in a very straightforward way,” says Przybylski. During the build, the coast of South Carolina has been hit by a number of severe weather events. “The day after we sprigged the greens, we had two inches of rain in 55 minutes,” he adds. “And on September 30, Hurricane Ian hit us.”

When Ian struck the Carolina coast on September 30, it was the storm’s second landfall – it had first hit Florida a few days earlier, where it was the deadliest hurricane since 1935. By the time it reached the Carolinas, it was slightly less strong, but it still did damage. “We had five inches of rain from Ian,” says Przybylski. “We opened up at eleven the next morning; we had very little sand movement, except in a couple of areas where the faces were very steep. Overall, I was very pleased with how the bunkers handled the rain.”