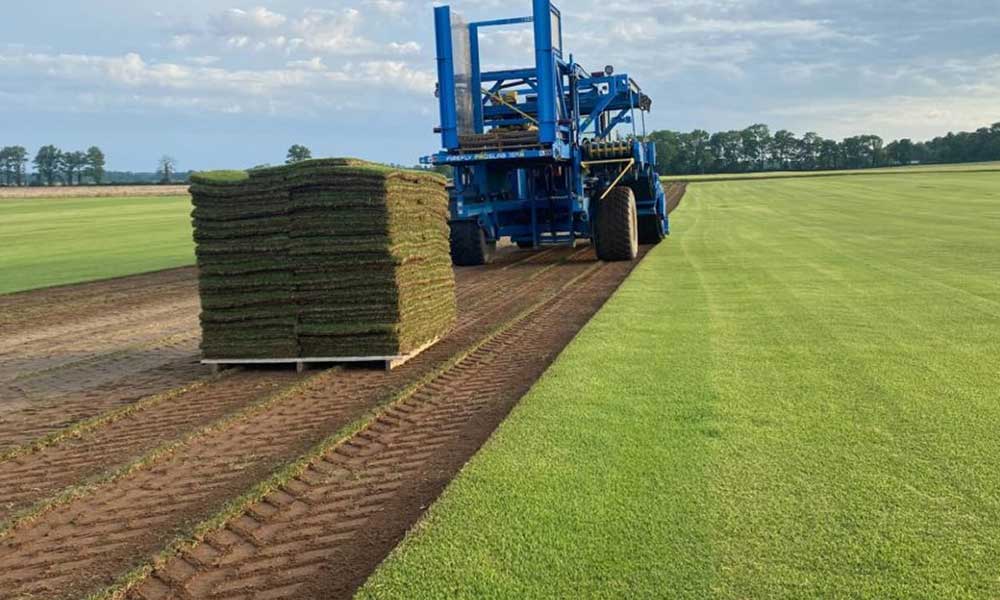 Joe and Pamela Bammer, owners of Grassmasters Sod Farms, started their sod farming business 25 years ago in June 1997. The two were married in 1987 and continue to be partners in life and in their company.

Joe and Pam met while both attending college at Colorado State University. After graduating, Joe didn’t decide to go into the turfgrass industry, he said he just kind of “fell into it.” After working for a brief period of time for his grandfather in Central America, he used a recruitment service to search for jobs. He met Walt Pemrick from Warren’s Turf Group, Inc. and they hired him that same day.

“Warren’s Turf was very big at that time and they sent me to California to start working in 1988 and that’s all I’ve been doing since then. I’ve been dealing with bermudagrass since day one,” Joe said.

Shortly after starting at the farm in California, Joe went from being the assistant manager of the farm to taking promotions at farms across the country. He moved to a farm in North Carolina and then to Tifton, Georgia where he became an operations manager over multiple farm locations.

When that business was sold, Pam and Joe spent the next three years working for Thomas Brothers Grass in Southern Tennessee while living in Huntsville, Alabama. Joe worked in production, while Pam worked as the office manager. Ultimately, Joe decided he wanted to work for himself. Although he was fortunate for his time with Warren’s Turf and Thomas Bros, Joe and Pam Bammer started their own turfgrass business in June 1997.

The first Grassmasters sod field consisted of about 30 acres of tall fescue and bermudagrass in Patoka, IN. The company sprigged two golf courses with bermudagrass their first year in business.

“I don’t know if Joe could have opened a sod farm right out of college. He learned something everywhere we went. He learned good things and bad things and was  exposed to different varieties of grass and different ways to do things in different markets and how to get the product out there. I don’t think we’d be who we are today had he not gone through that,” Pam said.

She explained that they’ve grown tremendously since then by word of mouth, but also by standing behind what they do while providing people good products. Joe agreed saying he’s grateful they get customers who acknowledge that Grassmasters produces a solid product.

“I’ve never seen anybody work as hard as Joe in my whole life and I think that was what led people to give out his name and our farm name.  They’d say call Grassmasters, they will take care of you. So that’s what we’ve done. We’ve taken care of our customers.  We aren’t happy unless our customer is happy.” Pam said.

Pam handles all business operations except for production. She oversees Grassmaster’s in-house responsibilities, including: payroll, answering the phone, cutting, trucking, shipping, accounting and billing. Grassmasters has about 25 employees between their Indiana farm and now Colorado farm, which opened in 2020.

In addition to those two farms, Grassmasters has partnership farms in Kentucky and Panama in Central America.

The Bammers have three daughters. Their oldest Emily was pregnant and teaching when the Covid-19 pandemic hit, and instead of going back to teaching virtually, she took a year off teaching and started helping Pam with office responsibilities such as answering phones and giving quotes for jobs. Now, she works full-time with Pam at their Indiana location.

Their middle daughter Katherine and her family lives in Colorado but does not work on the farm there. She is a hairstylist. Their youngest daughter, Grace is in her 5th year at college and spent all summer working on their Colorado farm harvesting and installing sod. Pam said Emily and Grace have worked on their farm since they were old enough to help and enjoy being a part of the company.

Grassmasters offers sodding, sprigging and fraze mow services. Joe had experience with sprigging when he worked at in the Southeast prior to opening Grassmasters and he became familiar with the process. Pam explained they were the first sod farm to bring bermudagrasses to Indiana.

“We do an awful lot of sprig work for the tri-state area.. I think we’re going to start building sprig planters again,” Joe shared. Grassmasters prides itself on having more varieties and sod products than any other sod farm in Indiana. Pam said Joe wanted the farm to be the one place in the area that you could go to to find any type of grass you needed.

Joe recalls being interested in Innovation® Zosyiagrass before it was officially released. “We actually got some of the very first plugs available of Innovation before anybody. I was looking at the NTEP trials for something special and I’ve always been a believer that zoysia would eventually have a bigger place in the market so we followed it,” he said.

Grassmasters is currently working with turfgrass breeder, Dr. Wu at Oklahoma State University to evaluate new cold tolerant varieties at their Colorado farm. “To me it’s finding something that will fit the niche market out there with water usage conservation. They’re outlawing bluegrass and fescue in several spots so something needs to fill the gap there. Maybe it’ll be Innovation,” Joe said.

He explained that for him, Innovation is easy to grow, harvests well and he thinks it looks good. “It works great for us in the transition zone and I want to go farther north with it. We’ve have test plots of it out in Colorado. We’re taking a hard look at it out there to see if it fits,” he added.

They used to grow just a few plug trays of it at a time, but now Joe believes they’re currently one of the largest growers of Innovation Zoysia in the nation. Although he thinks some larger farms may pass them soon, he is proud to have been one of the first farms to expand this variety. “Innovation just does well for us. It can survive a winter, it’s got good cold tolerance, it makes excellent sod and we’ve been very happy with it,” he said. “Now suddenly we’ve got a lot of people calling us for it.”

Recently, Grassmasters supplied 35 acres of Innovation for Red Feather Golf Course in Lubbock, TX with more to come next spring from their farm. Joe attributes this job for spreading the word about Innovation. It showed how good it looks in a golf setting. The process of the installation was broadcast over different social media platforms over the course of a few months.

“There are other farms that are bigger than us, but we do get selected to do some very special projects. We’ve done a couple of the largest golf renovations in the past two years with this Red Feather job, as well as Kentucky’s Park Mammoth Golf Club,” he said.

Grassmasters Sod Farms has supplied bermudagrass for three National Football League (NFL) stadiums. They provide grass for the Cincinnati Bengals’ and Indianapolis Colts’ practice facilities every year. They also installed a field when the Tennessee Titans hosted an NFL draft party inside the stadium in Nashville, TN. They have also supplied grass for Churchill Downs racetrack in Louisville, KY.

“We have sandy fields where we are located. Our high-sand content is probably the thing that sets our farm apart. That sand-base does very well for zoysiagrasses and bermudagrasses, producing a very good sod that people like. We’re close to 90% sand in a majority of our warm-season fields and that’s kind of a big deal. There aren’t many sod farms like that.”

Pam said it is phenomenal to be a part of these large and professional jobs, but explained that a majority of their business actually comes from local homeowners, builders and landscapers. “While everybody sees the big things, the relationships that you have with your local customers  are equally as important.”

She said that when she thinks back about where the business was 25 years ago, she laughs at how they used to do some things. “We learn something new every day and keep it and continue forward with our eyes open to see if somebody else is doing it better. And if we need to, we modify how we’re doing things. And it’s always been that way.”

In the next 10 years, the Bammers hope to be doing exactly what they’re doing now, but better, always. They are also looking forward to the growing success of their Colorado farm, which they still consider as new.