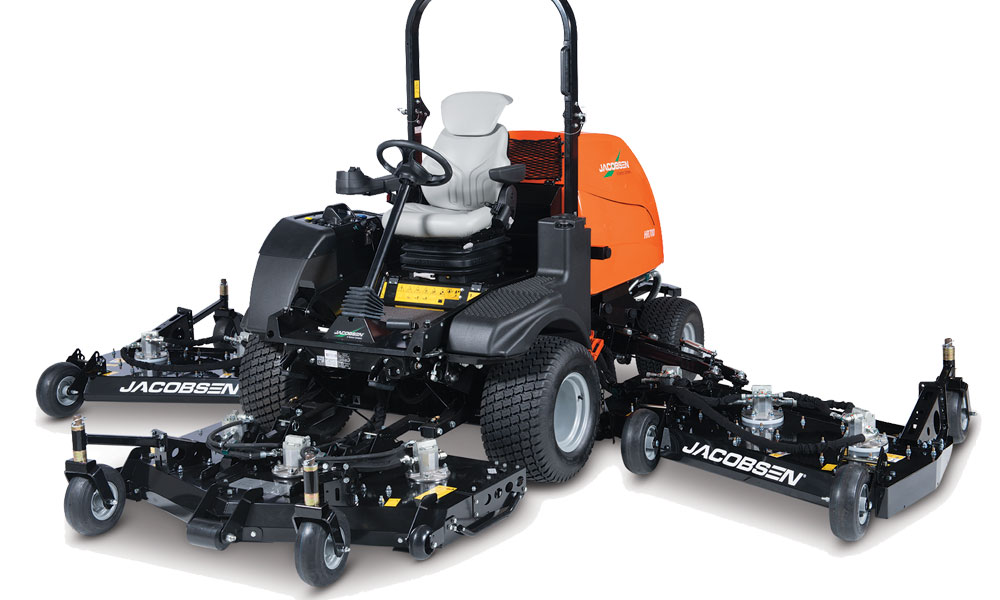 It was 1923, and golf history was being made. Twenty-one-year-old Bobby Jones had just won his first major championship, claiming a U.S. Open play-off win over a field that included Gene Sarazen, Walter Hagen, Chick Evans and Francis Ouimet. While Jones was making history on the greens at New York’s Inwood Country Club, Oscar Jacobsen was rolling out the first cast aluminum greens mower designed to cut fine turf and bent grass greens without causing surface damage.

Today, Jacobsen is still an innovative leader in the golf industry, and “quality-of-cut” is still key to defining the Jacobsen brand. Not surprisingly, prestigious Oakmont Country Club, site of the 2016 U.S. Open and eight previous Opens, has been using Jacobsen PGM 22 walking greens mowers since 1999.

Oakmont Superintendent John Zimmers explained, “Part of the history and the culture here at Oakmont has always been about firm and fast greens. Our greens are a very unique poa annua grass that we found are best maintained with a Jacobsen PGM 22 outfitted with a 19-inch reel on a 22-inch roller.

“I’ve been doing this for years now,” Zimmers added, “and we’ve tried other mowers, other technology. We always come back to this mower. It cuts better, you get a better green speed, better quality of cut, better performance, better turf health and it’s just undoubtedly, hands down the best mower for Oakmont’s greens.”

Last year, in addition to renewing its fleet of Jacobsen greens mowers, the Oakmont staff added the HR700™ fourteen-foot wide-area rotary mower, specifically with the U.S. Open in mind. This industry-first mower can cut up to twenty-five percent more grass than traditional eleven-foot mowers and delivers a zero-uncut circle, while being easily maneuvered around obstacles.

David Delsandro, Director of U.S. Open Operations & Projects, said, “The new HR700 rotary enables us to meet the USGA specifications for rough mowing. With this mower, we can mow over a four-inch height-of-cut and get a more uniform, denser stand of rough.”

One hundred and twelve years had lapsed since golf was the last part of the Olympic games, but when golf returned to the Olympics in 2016, Jacobsen equipment was there. Described as the course that almost didn’t exist, construction of the Olympic Golf Course was initially contested by local officials who believed that one of Rio de Janeiro’s two existing courses would be acceptable for the event.

With representatives of participating golf organizations, including those from the PGA Tour, advocating the need for a wholly new, championship-ready course, Rio’s Olympic planners eventually acquiesced. As PGA Tour Executive Vice President and Chief Global Communications Officer Ty Votaw told the Washington Post, “It took us a couple of years to get people to understand those courses weren’t acceptable.”

Six-plus years in the making and with only a two-year grown in the period, Rio’s Olympic Golf Course slid in under the wire, ready for a play during the 2016 Summer Olympics. This feat was pulled off largely because of the talents of Superintendent Neil Cleverly and a well-made decision to name Jacobsen as the preferred supplier of equipment.

During the construction of the Olympic Golf Course, Cleverly confronted problems most superintendents never face, including packs of 150-pound-plus indigenous rodents known as capybaras, that as herbivores, found the Zeon Zoysia fairway grass and the Sea Dwarf Seaside Paspalum used on the greens to be their favorite new menu items. Cleverly, who came to be known as the “Grass Whisper,” also dealt with anxious local politicians, concerned environmentalists, a variety of protesters, unskilled labor, three-toed sloths, poisonous coral snakes, ground burrowing owls, and, of course, those well-fed capybaras that were packing on more pounds with each passing day. Despite all these challenges, thanks to Jacobsen, he never had to compromise on quality equipment.

Using the Jacobsen Eclipse 322 riding, hybrid greens mower, Cleverly and his crew benefited from the mower’s versatility to operate as a triplex and as a single mowing unit. Cleverly described the mower as a semi-heavy machine that does, “a huge amount of work and produces a fantastic cut, even on steep banks.”

Responsive to the concerns of all the participating organizational facets involved in golf’s return to the Olympics, Jacobsen coordinated with the PGA Tour, the Olympic Committee, and the International Golf Federation, helping Cleverly and his crew pulls off the formidable challenge of creating a championship quality golf course under highly atypical conditions. For its role in this historic undertaking, Jacobsen gave much credit to ProGolf, a San Paulo, Brazil-based distributor that has represented the Jacobsen brand, offering Jacobsen mowers, aerators, accessories, and utility vehicles since 2012.

Two years before Oscar Jacobsen designed the first cast aluminum greens mower, he had, in 1921, already unveiled his original power mower. Christened the 4-Acre Mower, the product was intended to cut the “vast estates of millionaires,” with its 24-inch cutting swath.

In the TrueSet unit, the bedknife-to-reel adjustment can be fine-tuned via a gear that moves the bedknife in increments of one-thousandth of an inch and signals the adjustment with a distinctive, audible click. To simplify the process, even more, adjustments can be made from the front and top of the cutting unit and are made at two points instead of the previously used four points. A standard one-half-inch socket wrench, the same tool used for making a height-of-cut adjustment, is the only tool needed for making the bedknife-to-reel adjustment.

The bedknife of the TrueSet cutting unit is held in place with over 425 pounds of force, a standard Jacobsen identifies as “industry-leading holding power,” and the entire unit is built on a welded frame, as opposed to a bolted one, to provide strength and stability for extended years of use. From its tapered, spring-loaded and greaseable roller bearings to its classic XP™ reels, it seems the engineers and designers at Jacobsen have overlooked no details in refining its state-of-the-art cutting unit, built to ensure that the standards set in 1921 continue today.

Whether it is the Olympic courses of Rio, the always-high standards at Oakmont, the White House lawn, the grounds of royal palaces, sports fields or historic landmarks, you’ll find Jacobsen mowers and maintenance equipment, continually delivering the quality and precision that that has earned the trust of turf managers for nearly one hundred years.