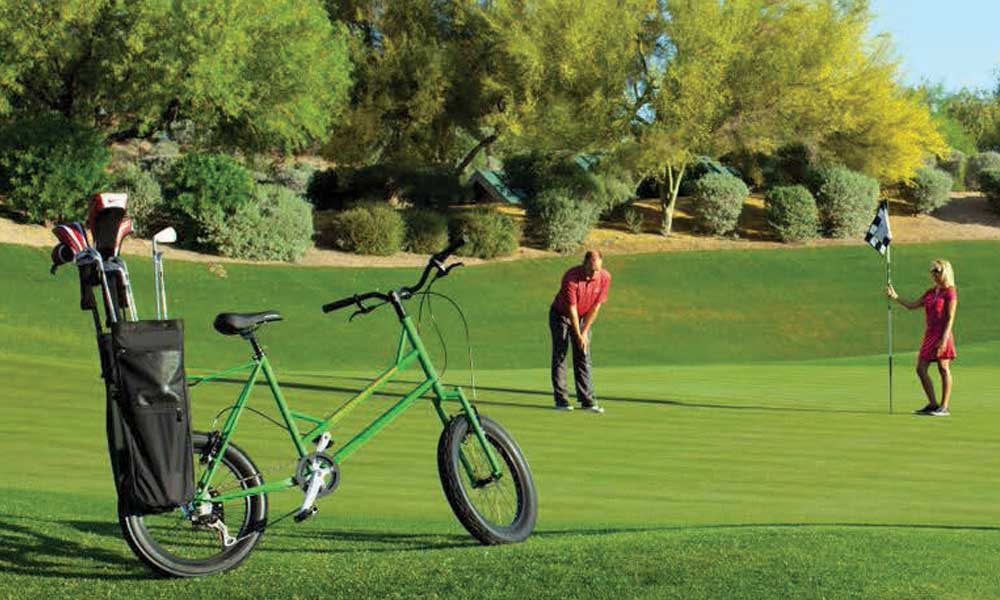 No one in the golf industry reasonably suggests that golf is currently on an upward trend as American’s favorite pastime. In fact, golf is at risk to slip from the prominent spot it has held for years as the top sport or recreational activity pursued by households that have an excess of $100,000 in annual income (based on yearly dollars spent on the sport and its related gear).

Moreover, you may be surprised to learn that bicycling is the activity that threatens to claim golf’s number one position on the list of sports-related expenditures within this select income demographic. Although the potential for America’s growing enthusiasm for biking to overtake its passion for golfing is news to many people in the business of golf, the bigger surprise may come from the news that there is steadily growing interest in options that interweave golfing with biking, skateboarding or other activities.

Are we ready for game changers?

Before you rule out any of these new approaches, remember that the number one reason cited by golfers for not getting to the course more frequently is the amount of time required to play.

Ideas that Move You Beyond the Golf Cart: The Golf Bike

The Golf Bike was invented by Todd May, the president of Higher Ground Golf Company, headquartered in Tallahassee, Florida. May, who loves both golfing and biking, said, “I found it difficult to make the time to experience both activities on a regular basis. With The Golf Bike, I have combined the benefits of each, bringing the elements of fun, fitness and speed of play to the greatest game ever played.”

May points out that The Golf Bike

Puts a new spin on an old tradition, while maintaining the long-established integrity of the game
Provides avid golfers with the ability to play at the speed of cart play while experiencing the fun and fitness benefits associated with cycling

Has been purpose built; designed from the ground up specifically for use as a means of on-course transportation
Carries a “coolness factor” that makes the game of golf appealing to a wider market and a new generation of young golfers
With wheels that are smaller in diameter than the wheels of typical bicycles, The Golf Bike requires less torque to pedal. Designed to minimize turf damage, the bike features 20 x 3 inch, wide track rubber tires that are broader and softer than the tires generally used on bikes. To accommodate frequent mounting and dismounting, the bike is built on a low-profile mixte frame. The mixte frame (from the French word meaning “mixed”) is a type of step-thru frame design that functions equally well for male or female riders.

To transport your clubs, two custom designed golf bags are mounted on either side of the bike’s rear wheel. You might think of them as quivers intended to hold seven golf clubs on each side of the bike. May originally experimented with a clip-style method of holding clubs, but in his testing, soon realized he missed the traditional experience of pulling the selected club out of the bag as he prepared to take his shot, an observation that led him to the bike’s current golf bag design.

May explained, “The Golf Bike is about fun, fitness and speed of play. We are breaking with tradition while hopefully at the same time still respecting it. It was very exciting to us as we launched The Golf Bike to be contacted by the Florida Historic Golf Trail (part of the Florida Division of Historical Resources). They sent us copies of photos and newspaper clippings about inventor, Thomas Edison, and business magnate, John D Rockefeller, riding bikes while playing golf.

“Our goal is not to change the game of golf, only to enhance it. We want to see the game we love continue to grow and prosper. We’ve combined golf–the greatest game known to man with man’s greatest invention–the bicycle!”
The Golf Bike was unveiled at the 2013 PGA Merchandise Show. Earlier this summer, the Higher Ground Golf Company announced its official product ship date as May 4, 2015, for orders from the public.

Surf the Earth with GolfBoard

Gaining its start by raising investment money via a Kickstarter campaign, the Oregon-based company, GolfBoard, offers another new take on on-course transportation. Boasting that it allows golfers to “Surf the Earth” in a way that feels similar to snowboarding, surfing or skateboarding, the GolfBoard is a custom-designed version of an electric skateboard that is powered by an environmentally friendly lithium-ion battery.

No ordinary skateboard, the GolfBoard uses a four-wheel drive posi-traction drivetrain. Industrial grade gearboxes provide power to all four wheels (no chains, no belts), and specially designed 4 x 11 inch tires are gentle on the turf while delivering no-spin traction.

Speeds pace of play dramatically, making it possible, according to the company’s testing, to play a round of golf in two hours and thirty-seven minutes
Is steered by leaning, making it intuitive to use with gentle acceleration and smooth braking
Provides a new entertainment proposition for golf courses, yet is designed to do so without changing the traditions of the game
Has a limited number of moving parts, making it simpler and cheaper to maintain than a cart
Was designed to be safely and effectively used on a range of terrain types, including steep grassy slopes, paved trails and even soft turf or loose gravel
Offered with financing and leasing options as well as special liability insurance plans
Weighing 115 pounds without its rider (approximately 600 pounds less than a golf cart weighs) GolfBoard causes 30% less impact on turf grass than a standard golf cart causes. Jim Black, Director of Media/Communications for GolfBoard explained, “While a GolfBoard tire may have 30 percent less contact with the grass than a golf cart tire, the GolfBoard itself, with the way it is used and the sheer reduction of weight versus two riders in a cart, can reduce actual turf wear by as much as 75 percent.”

GolfBoard was honored as the “Best New Product of the Year” at the 2014 PGA Merchandise Show.

The Golf Skate Caddy, another innovative idea for transportation around a golf course, provides a different take on the “surfing” experience offered by GolfBoards. Guided by a single handle, riders push left or right and shift their weight accordingly to steer their vehicles. A hand-held, 2.4 GHz trigger controller directs forward and reverse movement, adding to the experience of hand controls vs. navigation solely by leaning and shifting.
Describing the Golf Skate Caddy as a “personal golf transport product,” the company emphasizes the benefits of each player being able to focus on his or her game, going directly to the ball, rather than “chasing after everyone’s golf balls in a golf cart.”

A rechargeable 8 Ah lithium iron phosphate (LiFePO 4) battery which, can be fully charged in 3.75 hours
A dual 1000w whisper-quiet, high torque brushless motor with soft-start
10 inch, all terrain tires and ABS (anti-lock braking system) regenerative brakes
Top speeds of 12.4 miles per hour and a maximum weight load of 243 pounds
Includes a front mounted caddy suitable to carry a traditional golf bag as well as holders for a sand bucket, drink bottle, umbrella and scorecard
Other features include a weather resistant USB port, mapping software and a phone holder
Sports a removable rear seat that can be upgraded to a six-pack cooler
The company is based in Boca Raton, Florida, and offers leasing, purchase and revenue sharing programs.

Among the first golf courses to embrace the idea of expanding on-course transportation with a variety of alternatives to the traditional golf cart was the Troon-operated Kierland Golf Club at the beautiful Westin Kierland Resort and Spa in Scottsdale, Arizona. After first adding Segway’s to their course, the Kierland took their forward-thinking approach a step further, adding both golf bikes and golf boards. As Head Golf Professional, Peter Treyve explained, “We wanted to offer our golfers a choice in golfing experiences.”
The Segway model featured is the Segway GT, which uses dynamic stabilization technology, including gyroscopes, tilt sensors, high-speed microprocessors and electric motors to create and maintain stability and balance. Equipped specifically for golfers, each Segway is outfitted to hold a golf bag, scorecards, balls, tees and drinks and can accommodate up to two passengers.

By design, Segways are designed for low impact on fairways and are fun, quiet, speed the pace of play, and run on emission-free battery power. As the first golf resort in the United Stated to use Segways on its courses, the Westin Kierland Resort & Spa is currently the only Scottsdale golf resort to offer these environmentally green, personal transportation vehicles as part of a round of golf.

In addition to carts and Segways, golfers at the Kierland Golf Resort also have the choice to use golf bikes or golf boards. The bikes are seen by many golfers as an effective way to increase their workout experience, and the boards are perceived as being both convenient and just plain fun to use.
Nancy Dickens, CGCS, is the Club Manager at Kierland. She is one of only twelve women to hold the distinction of certified golf course superintendent with the Golf Course Superintendents Association of America. Dickens, who holds degrees in both finance and turf grass management shared that both she and Kierland Golf Course Superintendent, Dan Figueras, CGCS, have been very satisfied with the addition of the bikes, boards and Segways.

Nancy said, “The bikes are fun and easy to pedal and can really turn the golf experience into an athletic experience. The board is even easier to ride than a bike is. I anticipated that the boards would appeal mostly to younger golfers, but they have proven to be widely popular across all generations and easy to handle by people of all levels of athleticism.”

Summing up the success of the effort, Nancy added, “We love to do unique and different things to help expand the market for golf. Why would you want to sit on a stationary bike in a gym when you can come to Kierland Golf Course?”

You can learn more about how these companies are putting a new spin on golf on the following websites:

The Ins and Outs of Getting Certified: It’s Well Worth the Effort
Marking Smart… the art of enhancing Course Appearance with LOWER BUDGETS
To Top