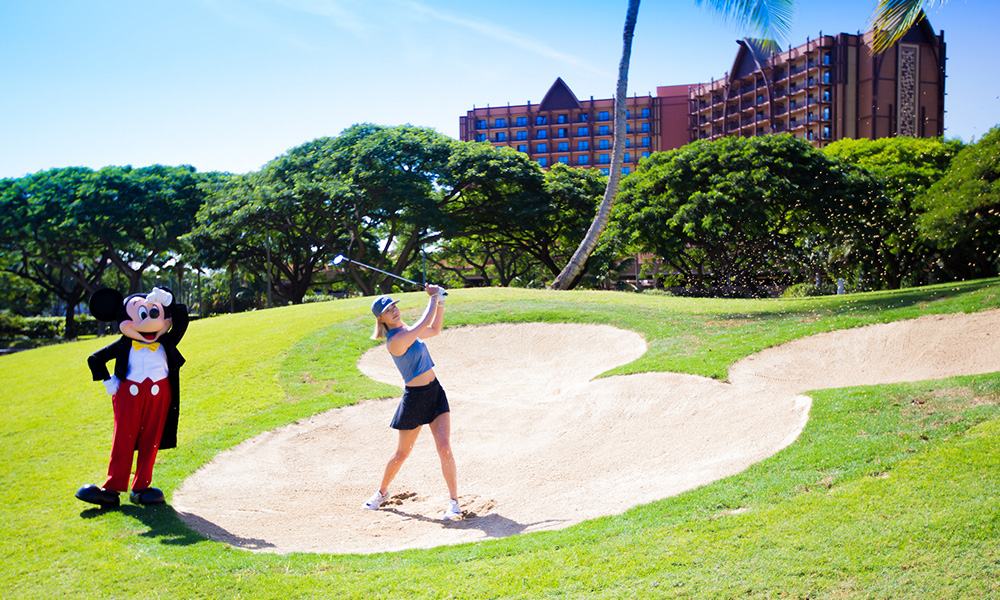 Ko Olina Golf Club, host of the LPGA’s LOTTE Championship, has completed a three-month renovation of its greenside and select fairway bunkers. The project included reshaping the bunkers and the addition of new silica sand and state-of-the-art drainage systems, known as the Billy Bunker method, providing optimum playing conditions for players of all abilities.

The highlight of the project was the dedication and grand opening of a new Mickey Mouse inspired bunker on the 10th hole, fronting Aulani, A Disney Resort & Spa at Ko Olina. The festivities included an appearance by Mickey Mouse himself, as well as LPGA superstar and Hawai‘i native Michelle Wie.

“The Mickey bunker is all about having fun playing golf and we hope this new addition will help create memorable experiences for our guests for many years to come,” said Greg Nichols, PGA, Ko Olina Golf Club’s general manager and director of golf. “It was an honor having Michelle join Mickey to celebrate the opening. This refurbishment is just one of several projects in progress that ensures Ko Olina Golf Club remains top of mind as the premier golf destination in the state of Hawai‘i.”

“I think it looks great! It’s so cute and adds ‘character’ to the golf course, especially with Aulani in the background,” added Michelle Wie.

Wie has been one of the marquee names in the world of golf since her start on the LPGA tour in 2009. When in Hawai‘i, Wie calls Ko Olina Golf Club home, having honed her game at the club since early childhood.  Wie won the LPGA LOTTE Championship in 2014 at Ko Olina, the same year she earned her first major tournament victory — the U.S. Women’s Open at Pinehurst. Ko Olina Golf Club is proud to be hosting the 2018 LOTTE Championship  April 11-14th, 2018, its seventh consecutive year.