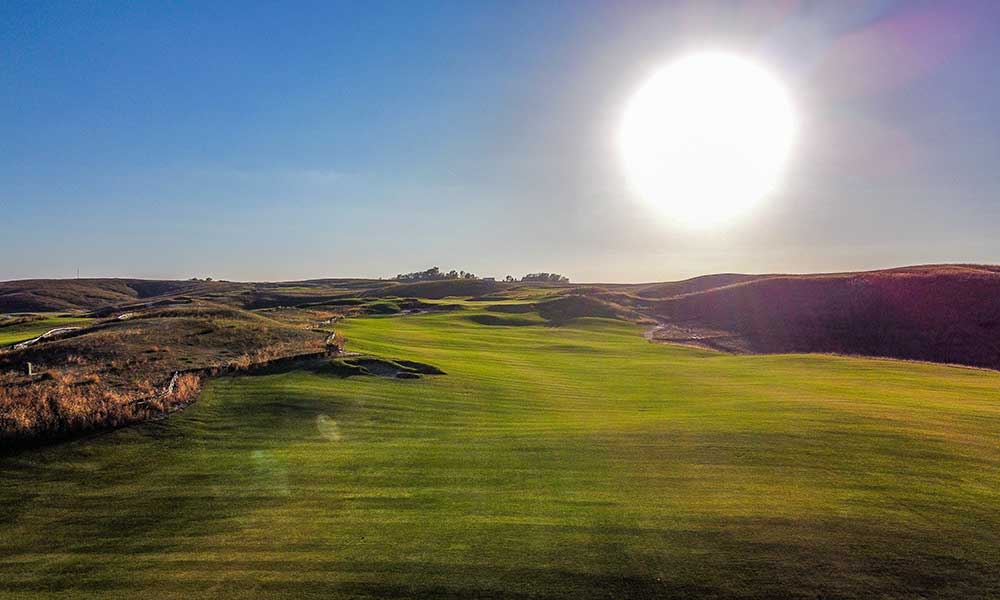 The new Landmand golf course in Homer, Nebraska, will open for public play on September 3. It is the first eighteen hole course by the firm of King-Collins Golf Course Design, which came to attention as the creator of the nine-hole Sweetens Cove in Tennessee.

Developed by the Andersen family, which has farmed the surrounding land for four generations, Landmand (the closing ‘d’ is silent) is named after the word for farmer in Danish, reflecting the family’s Scandinavian origins. Tee times are now available for booking between September 3-30 (when the course closes for the 2022 season) on the newly-launched website at www.landmandgc.com.

The Andersen family already owns the nearby nine-hole Old Dane course, which it built in 2012. The initial contact with Rob Collins and Tad King came about with thoughts to renovate Old Dane, but the project became more ambitious after King and Collins visited Nebraska and viewed several parcels of land, but were captivated by a site in the Loess Hill, above the surrounding farmland, cleared of trees in the 1970s but essentially left fallow for more than twenty years. Now, this 580-acre parcel has become the Landmand course.

“My goals have not changed,” says Will Andersen. “From the beginning until now, all I have wanted is a fun, playable golf course for the community. Anything on top of that is a bonus.” For visiting golfers, though, the most striking thing about Landmand will be the course’s sheer scale – the 580 acre site it occupies is almost four times larger than the average course.

Everything about Landmand is big. The 7,200 yard course has almost 84 acres of maintained turf through the green, with close to four acres of bunkers and nearly 277,000 square feet (6.35 acres of green surface. Four of the greens are over 25,000 square feet, including the seventeenth, a tribute to Alister McKenzie’s legendary ‘Sitwell Park’ green, which measures a whopping 30,340 square feet (for comparison, the enormous double green for the fifth and thirteenth holes on the Old course at St Andrews measures 37,000 square feet). “It’s taking our crew about three hours to mow the greens with three triplex mowers,” laughs Andersen.

“Tad and I knew immediately when we saw the site and met Will that Landmand was the big opportunity for us,” says Collins. “But it came with a catch. The site was and is extraordinarily beautiful, but it was clear straight away that delivering a course worthy of the property would take a mountain of work.” King-Collins is a design and build practice – Collins is the firm’s principal golf architect and Tad King takes control of managing construction. This is the model that has delivered most of the great courses built in the last twenty years, but the vast majority of these were built on sandy sites that required little in the way of heavy-duty construction work. Landmand, by contrast, on loess soil (a mixture of clay, sand and silt, formed by the wind), was a much bigger construction project. “We believe that the total amount of earthmoving to build the course was in the region of two million cubic yards,” says Collins. “That is an enormous volume, but it was necessary to create a walkable, playable course on terrain of this severity, traversing as it does the towering Loess Hills of eastern Nebraska. Thanks to a team filled with outrageously talented golf construction professsionals, we are immensely proud of the final product. I believe it will be something that golfers have never seen the like of before.”

Grassing of Landmand finished in September 2021 and the course has been growing in since then. Greens are 007 creeping bentgrass, while the through the green areas are a drought-tolerant mix of Kentucky bluegrass (poa pratensis) and ryegrass. “We considered fescue fairways, but given the nature of the soil, decided that this mix was a better choice,” says Collins. “It can get extremely firm and fast, while also tolerating very dry conditions. Obviously Nebraska has a pretty extreme climate – very cold in the winter and both hot and dry in the summer, so that was a key factor in our decision making.”

The course will operate fifteen minute tee time intervals, to ensure that play flows well. The Andersen family has initially built four four bedroomed cabins by way of lodging for visiting golfers; these are also available to book on the website.

King-Collins Golf Course Design was founded in 2010 with the vision of creating bold, timeless, strategic, and artistically inspired golf courses at a below market price. Sweetens Cove GC in South Pittsburg, Tennessee, the firm’s first project, is ranked 63 on Golfweek magazine’s list of the best modern courses in America. The firm is working on projects across the United States; Landmand will be its first eighteen hole course to open.