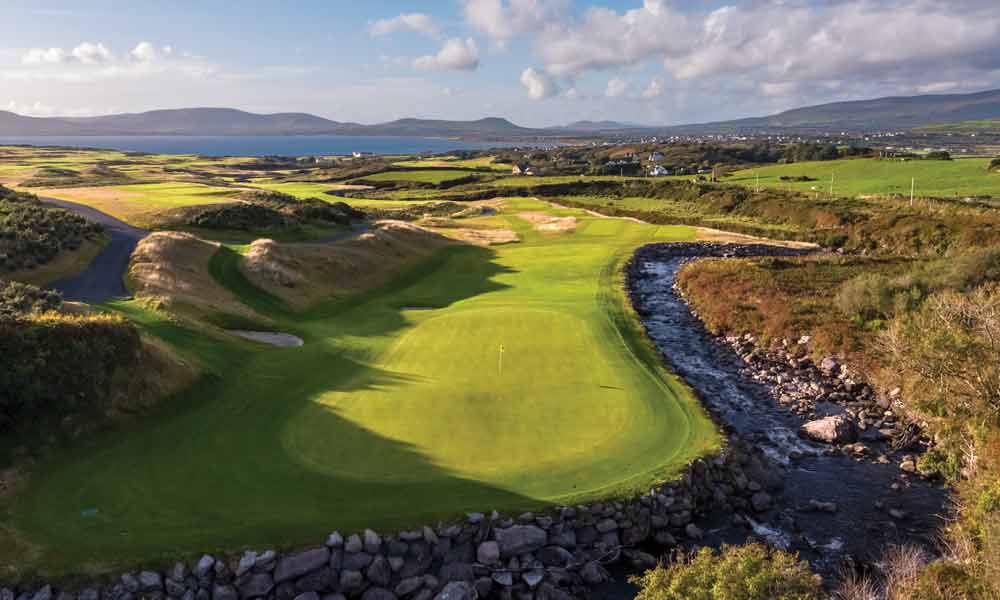 He’s designed golf courses on every continent on Earth except Antarctica – over 270 original designs in 40 different countries. He’s been honored across the globe not only for his architectural brilliance and lifetime contributions to golf, but also for his tireless philanthropy as a worldwide ambassador of the game. And he’s quite the bon vivant…everyone likes to party with Robert Trent Jones, Jr. He’s a laugh a minute.

But he’d never designed in Ireland.

Talk about a statistical outlier, it’s almost as incongruous as Pete Dye having never designed in the U.K. until just a few short years ago. Here’s a country intrinsically tied to the origins of the game, on the one hand, one of the most accomplished and well-traveled architects in history on the other (and part of a dynasty as well), and for over half a century, somehow, they never crossed paths….until now.

It’s called Hog’s Head, and it’s a stirring site, perched high atop the rocky cliffs overlooking Skellig Bay in the southwest of Ireland, Town of Waterville, County Kerry. And as it took Jones’s whole life to get to Ireland, he figured he’d better go old school while he had the chance. The result was something that looks and plays like it’s 100 years old. We caught up with Bobby and chatted him up about it over a pint.

JF: Tell us about the history of Hog’s Head.

RTJ2: There was an 18-hole course here before called Skellig Bay, [est. 2006], but they went bankrupt and weren’t operating anymore, so we totally blew it up. A few holes have similar playing corridors, but it’s now an entirely new course.

RTJ2: Many people misunderstand or misuse the term “links.” They think it means only firm and fast conditions on windy site. That’s certainly part of it, but equally important, a links is a sea level course. A headlands course, on the other hand, is on the headlands, the clifftop overlooking the sea, but has similar playing characteristics to links, like fast and firm conditions, the ground game in vogue, and a golfscape open to the elements so the wind can blow.

JF: So it’s very much like Pebble Beach or Old Head?

RTJ2: Very much so, yes. And it’s out and back, like a traditional links. A few of the holes on the old course played towards the Bay, but now a long stretch of holes, eight through 16, wind around edge of the cliffs.

JF: Now on the outward nine isn’t there a salmon river that is the main natural feature you incorporated into the design?

RTJ2: It is. It’s called the Finglas River, it’s a major salmon run, and many of the early holes play over or around it. After two relatively mild, “welcoming” holes, at the par-3 third, you cross the salmon stream. The fourth and fifth holes, a long par-4 and a long uphill par-3, also play along the edge of the cascading river as well.

JF: Did the salmon cause you any issues regarding environmental restrictions or permitting?

RTJ2: Oh yes, The salmon stream had to be treated properly. braced the stream with rock armor so it would stay in its natural course. This made the habitat more stable and encouraged the salmon to spawn more actively and to thrive.

The holes by the river are wonderful and are one of many crescendos we hit with the routing. After the river, you turn downhill and play back towards the bay at the par-5 sixth, which finishes with Biarritz green like number nine at Yale. As you would expect, the green is really three little greens in one, which is right for a par-5.

JF: How do you maintain the green?

RTJ2: The entire course is fescue, like Chambers Bay. We doubled down on it here: tees, greens, fairways, and rough. It’s firm and fast since the fescue when unfertilized and gets only rainwater, is perfect in a Maritime climate, where it thrives. We drained the center part of the green to both the left and right so you can mow it without scalping it and fescue aren’t as tightly mowed as bent anyway. They are a little slower, stimping at 9-10, maybe a bit faster when dry.

JF: Then almost the entire remainder of the course plays along the cliffs?

RTJ2: It does. eight plays directly to the sea, and then you weave in and out of the cliffs all the way through the par-3 15th. There are some iconic moments….At 11 you play directly towards the Hog’s Head rock in the Skellig Bay to a double green shared with hole 14. On a blustery day, you have to play both your tee shot and your approach on number 12 into the bay and let the wind bring it back into play for you. (That’s why the hole is called “Courage.”). We call the two greens of the 13th hole “The Twins.” And the seaside 15th overlooks Waterville town in the distance. Finally, you turn towards home for a closing par-5 for maybe a birdie or eagle finish.

JF: A lot is made of your recent epiphany towards designing as much as possible to emulate the great U.K. and Irish courses. How has your architecture changed over time and what do you show us that is new at Hog’s Head?

RTJ2: My mantra here was “Built by friends, for friends, for fun.” So we have wider fairways, less rough, and well-contoured interesting greens, it’s not an overly long course, but it has really interesting smaller bunkers, well placed for strategic options. You need to play the ground game to keep the ball under the strong winds. Most importantly, we put choices in the game. It’s a great match play course.

JF: It seems like the imprimatur here was somewhat minimalistic. Did you use any ultra-modern tech at Hog’s Head at all?

RTJ2: Not really, no. Instead, we are back to basics. This is a Maritime climate, so we just let the grass grow. That’s the way they did it when the game was born, it still works to this day, and it’s totally in keeping with the spirit golf. It makes for a really fun, fast, firm playing surface.

Much of that success has to be shared with Head Superintendent David Dahl and his superb team. David is a young, hard-working fellow who is dedicated to the founder’s vision of providing firm, fast, and fun playing conditions. He’s got quite a green thumb, and he really knows when the weather is changing so he can make quick adjustments. That’s really important in Ireland where the weather can change so drastically so fast.

AgSource: Your Turf Testing Partner for 60 years
Bactifeed: A Craft Brew For The Ages
To Top