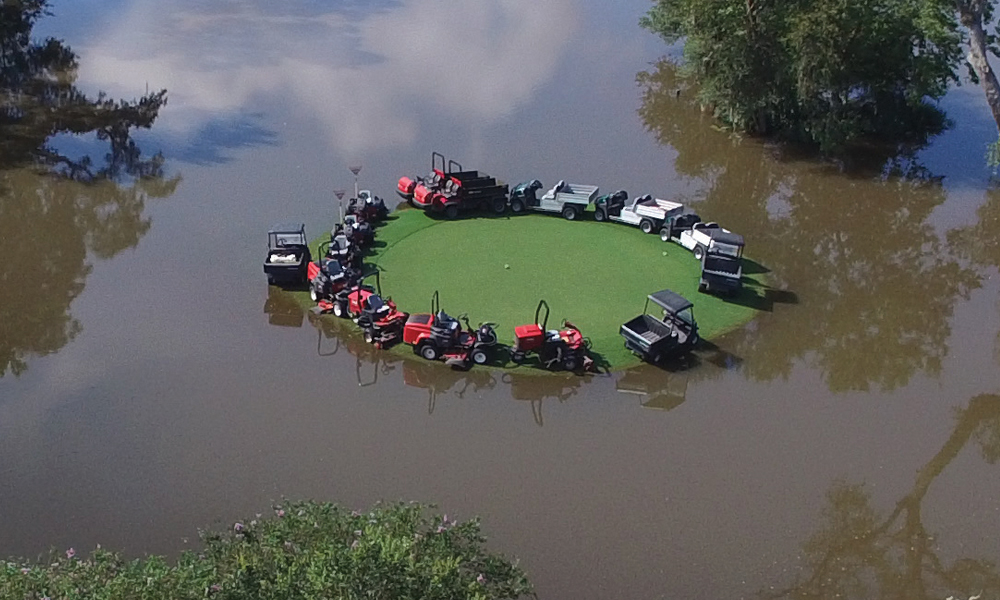 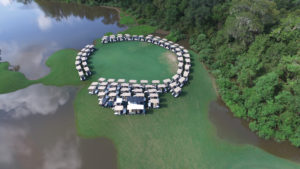 If you’ve never experienced firsthand a hurricane’s devastation, processing how overwhelming the situation feels can be difficult. Repairs cannot commence until flooding subsides, and debris is cleared. Electrical power, fuel, potable water and even small necessities, such as trash bags, plywood and nails, items we all take for granted, may be in short supply or totally unavailable.

Following the hurricane, suffocating heat and humidity can linger for weeks while the dearth of supplies can continue for months. Worst of all for a superintendent, crew members and other employees of the golf course may be dealing with the loss of a home, possessions, the vehicle they rely on to get to their job or, in some cases, the death of someone in their lives.

Despite these circumstances, golf course superintendents prove time and again that they can creatively effect amazing facility recoveries after hurricanes, fires, ice storms, droughts and other catastrophic events. Although they aren’t repairing a hospital or getting a fire station back online, a superintendent’s post-disaster work plays an important part in a community’s renewal. Reopening a golf course helps preserve jobs and paychecks, restores wildlife habitats and creates a much-needed oasis of recreation, escape and normalcy.

The 2017 hurricane season was historic in its activity and its destruction. Caught between two high-pressure systems, Hurricane Harvey moved into the Houston area on August 24 and then refused to leave. More than 40 inches of rainfall, some 33 trillion gallons of water later, the wettest hurricane to ever hit the contiguous U.S. finally found its way out of Texas. A superintendent’s worst cold-sweat nightmare pales in comparison to the cleanup and repairs required at hundreds of golf courses across the area. 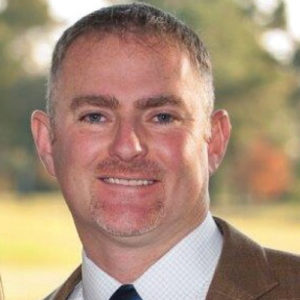 The Golf Course Trades thanks Texas golf course superintendents Kevin Cooper and Blayne Sparks for pausing in the midst of their recovery efforts to share valuable firsthand insights about their experience with Hurricane Harvey. In the process of telling their stories, they essentially have created a strategic checklist for turf managers or superintendents facing a significant weather crisis.

It Pays to Listen to Your Members

Located on the north side of Houston, roughly five miles from George Bush Intercontinental Airport, Lochinvar Golf Club is a Jack Nicklaus designed, private, 18-hole course that opened for play in 1980. Oak trees and stately pines define the scenic layout. The fact that the course does not have a creek, river or bayou along its property, but that it does have an adjacent 40-foot deep, 100-acre sand quarry proved to be advantageous topography during Harvey’s record-breaking rainfall. 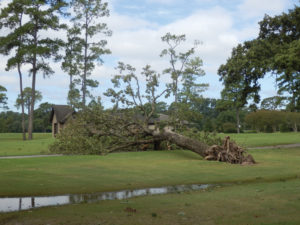 As the impending hurricane churned into the Gulf of Mexico, Houston meteorologists warned residents of the potential for 20 to 25 inches of rain, but club members at Lochinvar voiced an even more disturbing projection. Included among the membership at this exclusive club are some heavy hitters from the oil industry. With meteorologists on their company payrolls, these club members warned that rainfall amounts could, in fact, reach as much as 50 inches, a prediction that proved frighteningly close to accurate.

And on the Tenth Day

In some ways, Kevin started preparing for Harvey nine years ago during his second week on the job. In 2008, he was ten days into his responsibilities as superintendent at Lochinvar when Hurricane Ike hit. Fresh from his role as assistant superintendent at Muirfield Village Golf Club in Dublin, Ohio, Kevin did not have “hurricane preparations” on his watchlist. Then powerful Ike and a series of subsequent tornados welcomed Kevin to the Lone Star State. 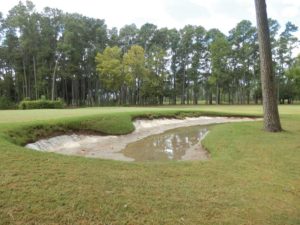 “Rule one of hurricane preparedness,” Kevin said, “is when you leave the course for the last time before the storm, take a chainsaw with you. I didn’t do it before Ike, and I wished I had. After the storm, the drive into our facility was heavily blocked with downed trees and debris.”

The “take a chainsaw” rule was only one of many lessons Kevin learned during his first hurricane. And if there is anything good to be said about Hurricane Ike it is that it helped prepare Kevin to deal with Harvey and all the other Texas-style wind and water events that have occurred since he became Lochinvar’s superintendent.

In contrast to the serious damages caused by Ike, Lochinvar was spared the worst of Harvey’s wind and flooding. Although the course closed on Saturday afternoon in advance of the storm and was without power for five days, by noon the following Sunday, assessment and clean up from the hurricane were sufficiently complete for the course to reopen for play. 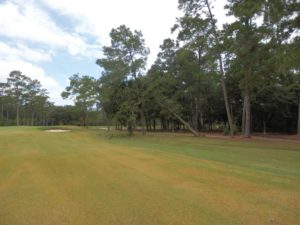 Storm and flood preparations at Lochinvar included dropping the water levels on lakes and water features by one to two feet, spraying greens with a fungicide and spraying growth regulators on rough, tees and greens. Kevin explained, “The decision to spray growth regulator in advance of the storm was pretty easy. We preferred to deal with a little bronzing of the turf than the scalping that can result otherwise.”

Other pre-storm efforts included powering down electronics, putting trash pumps on lifts and turning off power to two of the three pumps. “We know where our drainage challenges are,” said Kevin, “so we pulled drain gates, put in stops to prevent blockages and blew out our large drains.

“Over the years, we have worked with Dennis Hurley and the team at the Turf Drainage Company of America, installing approximately twenty of their patented IDPs, which are Irrigation Driven Pumps. These simple-to-maintain pumps operate off the energy of the irrigation system by creating a vacuum to move water. His guidance has helped our course get firmer faster and stay firm. I was amazed that when we reopened on Sunday, we could be off cart paths on most holes.”

Circling the Wagons on the South Side of Houston 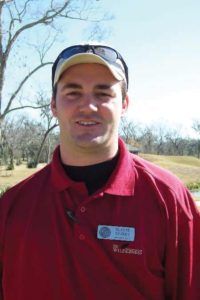 The Wilderness Golf Course Superintendent Blayne Sparks is another seasoned veteran of Texas hurricanes and flooding, including the record rainfall in 2016 that resulted in mandatory evacuations and millions of dollars in damages in the Lake Jackson and Houston areas. After flooding so severe that Blayne was forced to access his golf course by boat, you might think that the weather events of 2017 would surely have been kinder, giving him and his crew a well-deserved break. Instead, Harvey dealt them a double blow.

The Wilderness Golf Course lies only forty-plus miles northwest of Galveston Island and about fifteen miles from the Gulf of Mexico at Surfside Beach. This 18-hole public course, managed by KemperSports, was not only in Harvey’s path, but also it was situated in the floodplain for waters released by the Addicks and Barker Reservoirs in the days following Harvey.

After the storm subsided, The Wilderness Golf Course created a social media buzz when photos began to circulate showing the facility’s golf maintenance equipment and carts, circled Conestoga wagon train style, on what appeared to be islands in a vast sea of floodwater. While water lapped uncomfortably near the wheels of the circled vehicles, the carts and equipment remained above flooding, parked strategically on the course’s highest areas of elevation.

“Unfortunately,” said Blayne, “we have had the great displeasure of being well versed in emergency management scenarios as they relate to hurricanes and floods. The idea is not original to us at The Wilderness Golf Course, but it has been adopted in the effort to save important equipment for the cleanup and recovery efforts after the event passes.” 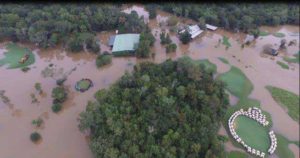 Plan Your Work, Work Your Plan

Blayne outlined some of the steps he and his crew implemented in the critical hours leading up to Harvey.

Lastly, Remember What Matters Most

While historic flooding and hurricane damages could justifiably dampen your spirits, both Superintendents Kevin Cooper and Blayne Sparks used the events as an opportunity to improve their golf courses, unite their teams and share their experiences with others.

“When it comes to a bad situation, how can you make the best of it for your group?” asks Blayne. “The most important thing that you can do as a superintendent is to remain POSITIVE. Remember that your employees are going to take their cues from you, so be mindful. You are the leader, and a positive attitude goes a long way to settle their frustrations. Talk to your staff and verify that their families and friends are OK. Your concerns for their wellbeing will unite the staffers and create a more harmonious working environment during a very stressful time.