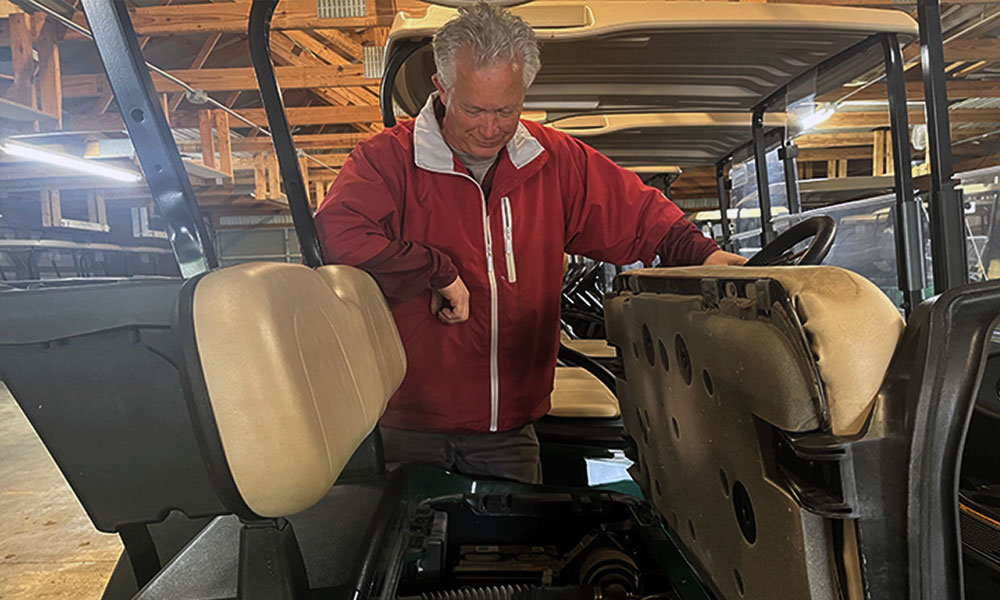 At Alpena Golf Club, golfers are greeted with long, green, accurately trimmed fairways, freshly groomed greens, and dependable carts to help navigate from hole to hole at the 18-hole course.

To get each hole in pristine condition, and make sure the equipment operates correctly, it takes a dedicated, knowledgeable, and hard-working crew that often does its job behind the scenes with little fanfare.

Golf Course Superintendent Steve Goike said from early spring until late fall, his team works from early morning until late in the afternoon to keep each and every hole, the driving range, and the practice putting green in the best condition possible.

He said the golf course begins to come to life in the middle of March, when he and his lead mechanic begin to do basic clean up and mechanical maintenance. After a long winter, the course is littered with tree branches, leaves, and other debris, and removing them is a top priority.

“We shoot to open in April, weather permitting, but we really go into clean-up mode in March,” Goike said. “There are always a lot of limbs that need to be removed and hauled out. I bet you, I have 30 loads of limbs I had to haul out. We also clean out the bunkers that are full of leaves and pine needles.”

Related: Tips and Tricks to Speed Up Your Golf Course Maintenance

Much of the attention for cleanup is on the front nine holes early in the season, Goike said, as the back nine is often too wet to work in, let alone golf on.

As the weather warms, and the grass begins to grow, Goike said mowing and trimming are done frequently. He said there are several different grades of cuts. He said the fairways, areas of rough, tees, aprons, and the greens are all cut to different lengths.

“We have five or six different heights of cuts and each one of them requires a different mower,” he said. “It is a never-ending process.”

The maintenance crew also picks up golf balls scattered on the driving range every night, edge the lawn around sandtraps, and performs countless other tasks almost daily. Goike said the 55 gas and electric golf carts are also moved into the garage every night and all pulled out and ready for action each day.

“The main reason we do it is because of the golfers,” he said. “They pay top-dollar and we don’t expect them to putt on dew or uncut greens. We want everything to be freshly mowed and everything nice and clean. That is what we strive for.”

As the temperatures begin to dip and the days become shorter, maintenance at the course changes a bit. The fairways are mowed less often and more focus is placed on removing leaves. Goike said the grounds crew also begins to prepare the course, especially the greens for winter.

“We are beginning to slowly get ready for closing in September,” he said. “We begin aeration of the greens and spraying snow mold preventers. If we didn’t do that we would have spongy greens, deep ball marks. We also blow out the lines of our watering system in October before we close down.”

Aeration is preventive maintenance where little holes are punched into the greens to open up growing room for grassroots and help keep the turfgrass healthy.

Goike said while his team is working on the course, it does its best to stay out of golfers’ way as to not distract them while they play and to prevent crew members from getting hit by an errant shot.

“We don’t want to interfere with them. We want them to have a nice peaceful round and not have to listen to the machines,” Goike said. “We also can’t be out mowing with people hitting into us, so it is a safety issue,” he said. “I’ve been (hit) about a dozen times over the 30 years I’ve been in the business and none of them have been nice. They all hurt.”