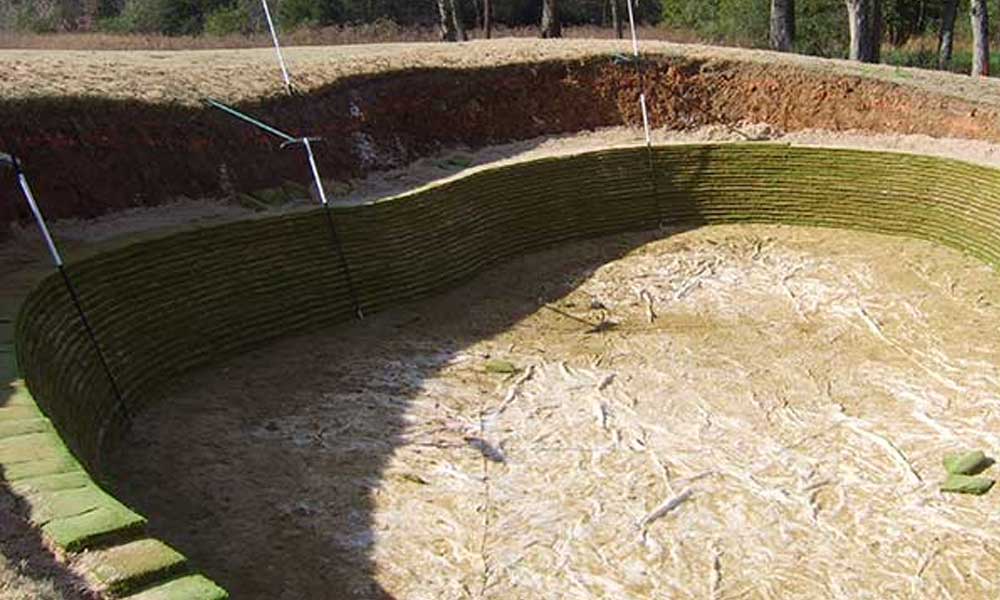 Originally designed by Greg Norman’s firm, the course in Loudon, Tennessee, opened in 2006.

The original design includes in excess of 60 large revetted bunkers that help frame many of the course’s green complexes.

Over time, the maintenance of these bunkers was becoming increasingly problematic, and the club’s golf course superintendent Andrew McClintock and his team were finding traditional reconstruction methods were becoming more and more futile.

“This is a first-class venue, but it was decided in recent times to bring in Troon Golf to manage the club and changes are being implemented right off the bat,” McClintock explained. “We ran a survey asking our members to comment on tees, greens, fairways and bunkers, the feedback, on the whole, being very positive, but almost to a man the resounding message from the membership was that the bunkers were letting the courses down.

“This wasn’t news to us but it crystallized our thoughts and clearly indicated that if we were to drive the golf course forward and increase our membership, which is a goal we set ourselves recently, then we needed to address the issues we had with our bunkers. The labor and maintenance burdens were huge and have actually resulted in many of the bunkers from the original design, being filled in and the condition of our bunkers meant it would be difficult to attract additional members to the golf club.”

McClintock turned to UK-based company Durabunker and contractor SouthEastern Golf to begin the first phase of a bunker project in November 2014.

Durabunker – formerly known as Envirobunker – is a patented bunker construction method that uses recycled synthetic material to build revetted bunker faces and edges. The new bunkers have a design life of more than 20 years and offer significant cost and maintenance savings, as well as a host of other benefits over traditional construction methods.

“I don’t think a ’challenge culture’ has fitted in well within the sport of golf, either in terms of playing of the game or construction of courses,” said Rhydian Lewis, director at Durabunker. “However it seems there has been a shift in recent times with the recognition that radical change is required throughout the game. The building of synthetic bunkers is one such challenge to the golfing psyche and one that I believe will eventually be widely accepted. The benefits are huge and the arguments really are limited. Even staunch traditionalists, on seeing the product, have accepted that it looks entirely natural and the list of benefits, including significant cost and maintenance savings, is a long one.”

The Durabunker method has been used at numerous venues in the UK, including St Andrews Links, Turnberry, and The Old Head. The introduction of the method at Tennessee National is the first Durabunker project in the US, and McClintock is pleased with what he’s seen.

“The product has absolutely transformed our bunkers,” he commented. “They look incredible, so natural, and totally in keeping with the golf course. Everyone to a man has been blown away by the result achieved through using Durabunker, both the product and the company have performed exceptionally for us.

“Durabunker staff were very hands-on, leading the shaping and construction work and ensuring quality standards were met by all concerned. The project will continue through into late January 2015 with the added benefit that the product needs no settling in time and can be ready for play immediately.”

The material used in the Durabunker method is highly stable and resistant to UV, helping bring significant cost and maintenance savings to clubs that choose to implement the technique. The new bunkers require no cutting or strimming, offer a fixed edge position, and resist all forms of erosion. Furthermore, due to the synthetic nature of the Durabunker offering, no watering or pesticides are required.

“Water conservation is a very hot topic in golf, and utilizing the Durabunker method gives courses the ability to have natural looking bunkers all year round without the concern of burn off or the drying out effect of the sun,” concluded Lewis. “I’m sure desert courses in the US, as well as other parts of the world, would be drawn to this type of bunker construction as a result.”