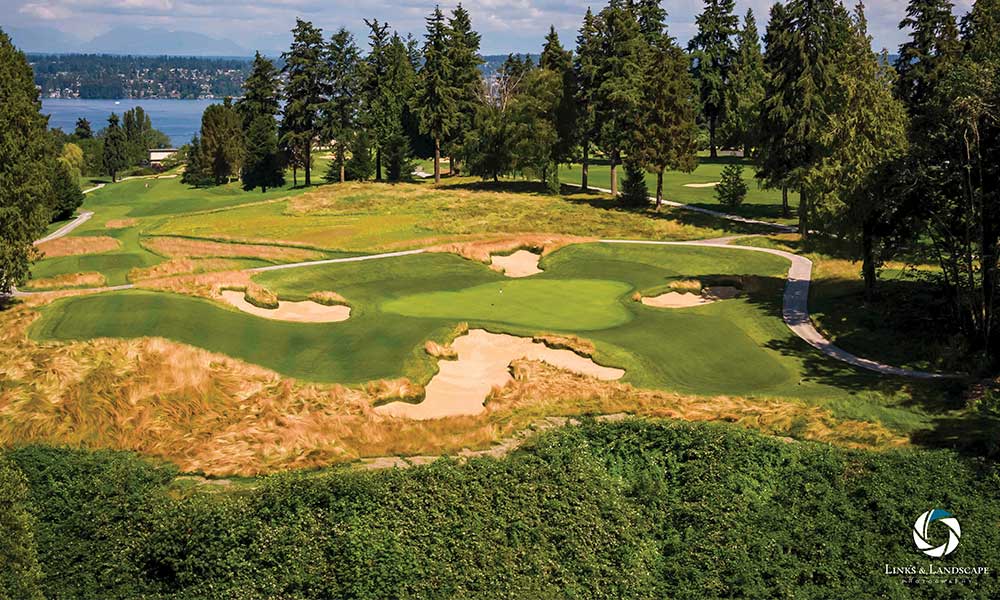 This column features the author’s recollections of his 33 years as a golf writer. These installments stem from his many travels and experiences, which led to a gradual understanding that the game has many intriguing components, especially its people.

This happened to me when my club, Sand Point in Seattle, underwent a multi-million-dollar remodel overseen by acclaimed golf architect, David McLay Kidd. The Scotsman converted a layout built in 1927 that had become a tree-lined, well-watered (naturally and through irrigation) bomb-and-gouge test. It’s now a fast-track, links-like frolic complete with hundreds of new terrestrial features that tilt into deep, fescue-bearded bunkers, the number of which was doubled to nearly 100.

Typical of older courses in our neck of the woods, the original site was denuded of the endemic firs, cedars and pines, which were sold as timber when the founder, Sam Hayes, prepped the land for a golf course and adjoining residential development. Hayes and his brother Morris owned a total of 600 acres that extended across a panoramic promontory – where the homes were platted and seven of the 18 holes were arrayed – all the way eastward to the shores of Lake Washington. In addition to the layout designed by British architect Francis L. James, the Hayes’ grand plan envisioned equestrian trails and a marina beside the lake. Unfortunately, the Great Depression dashed the horse and boat facilities, but the housing and golf components survived. Original lots sold for around $250; homes within the neighborhood now go for upwards of $3 million.

Any 93-year-old golf course will gather “moss.” At Sand Point, that meant older and diseased trees had reached their expiration dates, and have been selectively thinned over the past decade. Many have also been limbed up to increase access to sunlight, while improving airflow and recoverability for errant golf shots. Early-day photos of the course show a mere scattering of trees and eight rather deep gullies (only one exists today) that drained surface water off the hill and down to the lake.

Fast forward to late 2017 when a couple of adventurous members called DMK Golf Design out of the blue to discuss a bunker renovation for the course. Kidd answered their call, and suggested redoing the entire layout instead. A club-wide meeting was set for the personable architect to present his Master Plan. Well over 200 of the club’s 400 golf members attended. Aerial drone footage using CGI techniques was shown during the presentation, presenting a virtually new golf course that retained Tucker’s original routing.

Enthusiasm was high, and the project went to a vote. Over 96 percent of the ballots approved the work, a shockingly high number for a major transformation at a private country club.

Before the project began, Marcus Harness came to Sand Point from Sahalee Country Club in Sammamish, Wash., replacing the previous superintendent, Craig Sampson, who retired. Harness explains the rapid timeline for the remodel, which was handled by Ridgetop Golf of Gig Harbor, Wash. “Construction began in September 2019 and the course fully reopened in June 2020,” he said.

“The membership’s sacrifice and unwavering support throughout the entire process has paid off. The newly renovated golf course has received an overwhelmingly positive response. The finished product resulted in significant improvements to both golf-course strategy and aesthetics. Our maintenance team is now focused on developing sustainable programs to care for the property and ensure its long-term success.”

Harness is impressed with the project’s details. “Sand Point’s commitment to elevating its golf experience resulted in one of the largest offseason renovations in Pacific Northwest history. The scope of the work included a complete redesign of two holes, remodeling 10 greens, as well as tee and bunker renovations throughout the entire golf course. Additional changes included an expansion of short-cut turf by 57 percent and establishing approximately 15 acres of native areas. The goal of the heathland-inspired design was to create a reimagination of what the golf course may have looked like when it first opened in 1927.”

In addition to bunkers now sporting tall – and ball-swallowing – fescue “beards,” notable changes include: reconfigured and fast, now ponderous-to-read greens with low-cut surrounds; extended tees (versus the previous small, squarish pads); dramatic vistas of the lake and mountains from new points around the course; and the removal and/or reconfiguration of some cart paths.

During my first two rounds, I was struck by the craftmanship of Kidd and his design associate, Nick Schaan: the pot-like bunkers; the putting surfaces, some of which now sport false fronts and are guarded closely by sand traps; the suddenly mind-bending looks of the holes; and tall and dense stands of fescue in peripheral areas that were previously mowed.

“The Master Plan served as a solid conceptual foundation,” Harness continued. “However, David and Nick’s creativity and flexibility in the field enabled the design to elevate to even greater levels. Their vision became a reality through the precise execution of Ridgetop Golf Being a locally-based company, (owner) Kip and (his son) Casey Kalbrener’s experience in the region was paramount in navigating a project of this magnitude through the off-season’s elements and challenges. Their integrity, dedication, and commitment to excellence are what put the project over the top.”

It was only during my third round that I grasped perhaps the most subtle, yet biggest change of all: the hard and fast playing surfaces. During the remodel the fairways were plated with sand, making golfers believe they’ve almost been transported to the United Kingdom. A novel battery of shot options is now on our menu. We get – welcome news for this oldster – far more tee-ball roll. And, swirling winds off the lake and Cascades are an added factor in negotiating the challenge.

Kidd is pleased with the results. During his presentation to the members, he noted that Sand Point’s dense trees resulted in errant players being able to only punch out back to the fairway without other options. “The core thing about golf is: find it, hit it, find it, hit it.” Upon project completion, he noted, “We’ve done all this and couldn’t be more pleased. (The remodel) came out really, really well.

“My goal is to give the average player a fun bogey round and better golfers or sophisticated thinkers more options to strategically play a hole, be that shaping a shot or feeding the ball on a contour,” added the Scotsman, who now resides in Bend, Ore. “My incentive to work with Sand Point was driven as much by the passion of its membership as it was by the beauty of the views (available from the course).”

Commented general manager Owen Westervelt, who arrived at Sand Point in April 2018: “We asked David and Nick for bold ideas and they delivered. David told me that, as a Scotsman, the ground game is of particular importance. Before his remodel, few if any holes encouraged the player to attempt to use the contours of the ground because mounds, bunkers or grass height prevented this style of play. That’s no longer true.”

The members’ response to the new course has been enthusiastic, and it’s showing on the club’s tee sheet. Sand Point’s director of golf, Craig Hunter, a Scotsman like Kidd, estimates that the number of rounds played have doubled from a year ago. “For example, we had 6,000 rounds played in July 2020, averaging 200 rounds per day. We used to be around 100 only a few years back,” noted the Isle of Skye native.

While Sand Point golfers are thrilled with the revitalized layout, other creatures have continued to thrive on and above the verdant grounds. Bald eagles, hawks, osprey, crows, swallows, deer and other varmints are headquartered at this urban oasis. They, along with the members, will make this reimagined golf course home for decades to come.

Jeff Shelley has written and published nine books as well as numerous articles for print and online media over the past 32 years. The Seattle resident is the co-founder of the Northwest Golf Media Association. He co-authored (with Michael Riste) “Championships & Friendships: The First 100 Years of the Pacific Northwest Golf Association.” In addition, he wrote three editions of the book, “Golf Courses of the Pacific Northwest.”