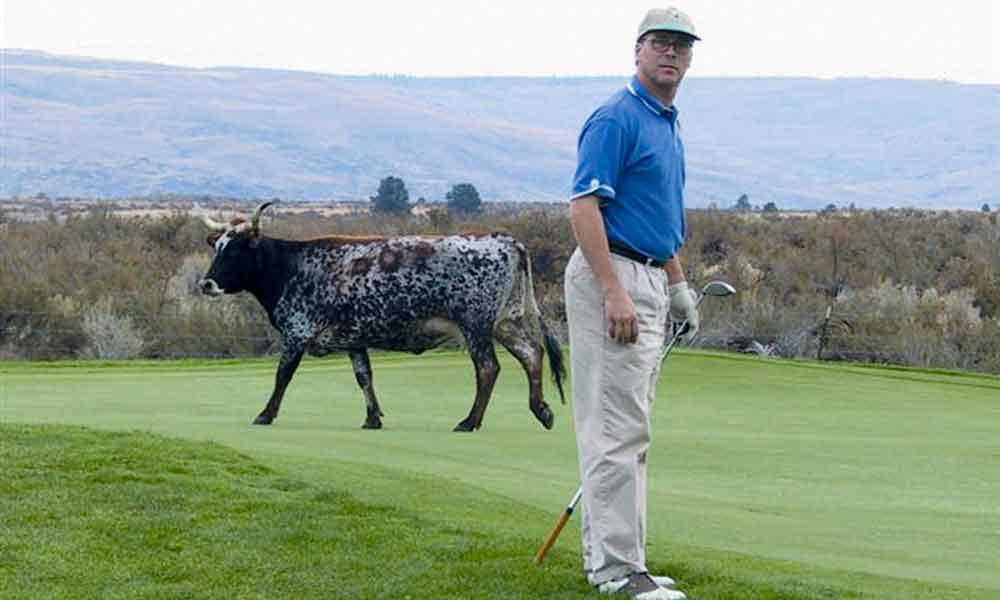 One of my many writing gigs over the years was being a music reviewer for several publications, including Victory Jazz & Folk Review, a monthly mag put out by the legendary Chris Lunn. Chris would send me all sorts of demo records, and I eventually became his “expert” on the blues, bluegrass, Tex-Mex, folk, and Zydeco. When I moved into writing about golf, chiefly the hundreds of places in my 622-page tome, “Golf Courses of the Pacific Northwest,” that musical background proved valuable.

Oddly, there’s a similarity to music and golf – two seemingly different subjects. On the one hand, there are 12-inch LPs. Until you actually put a disc on a turntable, you really can’t tell one thin slab of black vinyl from another. It isn’t until the needle settles into the grooves and the volume is turned up that the material comes alive.

Same thing with golf courses, which in the vast majority of cases are either nine or 18 holes. Certainly, the yardages and pars on scorecards vary, but you really can’t see a layout’s individuality until you put your spikes on the turf, swat the ball and chase after it. As a researcher, I continually sought insight into the character of each golf course. For that to happen I needed to learn its history, role in the local community, conditioning, endemic features (flora, fauna, vistas, topography, water features, and the like), relative difficulty or ease, the pace of play, noteworthy people, etc.

In other words, each golf course has its own special vibe, just like a set of tunes on a musical recording.

For Part 4 of “Making the Rounds,” I’ll take a look at some of the animals I’ve encountered on golf courses over the years. I’ve enlisted help from my friend, Mark Miller, a Colorado-based golf course architect who’s designed courses in Nevada, Virginia, Alaska, and Hawaii. Let’s review a few of our creature confrontations.

I’ve had two instances of driving through herds of cattle in the vast open ranges of eastern Oregon. The first time I was going from a course in Klamath Falls to one in Burns. On this 166-mile leg, I saw only two other cars on the road. Then, while speeding over a hill at 80 mph in my bright-red Miata, I observed fresh dung on the asphalt and immediately started hitting the skids. Sure enough, on the other side of the hill were at least 150 head of cattle clip-clopping along the road, guided by horse-mounted cowboys. The humans turned around and nonchalantly created an aisle through the beef and let me cruise through. The same thing happened in 2018 while driving from Bend to Silvies Valley Ranch (which, by the way, has goats for caddies). This time there was a cowpoke perched atop a hill holding up a hand-lettered cardboard sign that requested motorists beware the herd ahead.

A black bear at my friend Bob Spiwak’s Whispering Rattlesnakes Golf & Flubber’s Club in Winthrop, Wash., did his nightly deed during the night while my wife and I were sleeping in a tent nearby. Next day, Bob put up a sign for the tournament entrants that read: “Bear poop, free drop.”

While putting on a green at Kenwanda – named after its owners, Ken and Wanda Harris – in Snohomish, Wash., I was startled by a very loud “Boom!” I swiveled around and saw a guy on a fairway mower armed with a 20-gauge shotgun. Turned out this was the local mole-eradication program.

Crows are the best thieves in golf. I’ve seen them pick up balls in fairways and drop them on greens; raid unattended golf carts, take snacks and then defiantly defecate on the seats as they flew off; unzip golf pockets and steal Ziploc bags filled with expensive medications; throw out tees, scorecards and ball markers in search of food; swipe range finders, cell phones and, worst of all, car keys. Bald eagles and other bird species are also guilty of these kinds of larcenies.

Scenic Glacier View in Columbia Falls, Mont., is the closest course to Glacier National Park. During one round I heard heavy, repetitive banging sounds. Behind me was a lascivious elk in rut maniacally ramming his large antlered head against a nearby tree. Apparently, he and other males had been here before as there was very little bark left on that towering conifer. During a round at Hidden Lakes (now called the Idaho Golf Club) in Sandpoint, Idaho, I spotted a family of moose and several black bears lumbering along the peripheries.

I’ve seen deer adopted by golf courses. Among them was a fawn named “Fairway” at King Ranch in Frenchtown, Mont., and a friendly doe named “Divot” at Riverside GC in Ferndale, Wash., which greeted patrons as they entered the pro shop.

I’ve had several scary snake encounters. One came while searching for a wayward tee shot at Lake Hills in Billings where I came face-to-face with a Montana bull snake. Stretching 7 feet and tipping the scales at over nine pounds, these are among the largest snakes in North America. The same bad-shot-search-gone-wrong tale at the TPC Louisiana outside New Orleans. This time the danger was more real as a venomous cottonmouth (water moccasin) slithered by me in the thick Bayou mud.

The biggest beast I ever saw on a golf course was a 22-foot-long, likely one-ton crocodile at Mirage Country Club in Port Douglas, Australia. When my wife and I visited this part of Queensland in the 1990s the monsoons were at their damaging worst. Over 11 feet of rain fell during our three-week visit. The only way to get from Point A to Point B was by boat or aircraft, as all roads and railway lines were underwater. Mirage closed its back nine as the crocodiles were in heat, hungry and aggressive. Adding to the drama: potentially lethal stinger jellyfish closed all beaches, and Down Under’s many poisonous snakes were seen on newscasts floating through kitchens as housewives scrambled onto countertops.

Since we’re on the subject of water, there are fish stories. I’m sure many of you have hit a ball into the drink and come face to face with a mini Nemo. My favorite in this category comes from a friend, Steve Kealy, the superintendent at Glendale Country Club in Bellevue, Wash. Steve, in cooperation with state and local wildlife agencies, resurrected a long-gone salmon run in Kelsey Creek that meanders through his golf course. In the fall, Chinook (king) salmon over 40 pounds in size return to splash and spawn in the slender waterway.

Mark’s contribution involves his experience while overseeing a design/build of the Creek Course at appropriately-named Moose Run in Anchorage, Alaska, which opened in 2000. Here’s his story:

“The site had beautiful and wide Shipp Creek running through. It was heavily wooded and teeming with indigenous wildlife (lynx, bear, moose, deer, wolves, and coyotes). We had just completed a green for one of the more unique holes on the course. The hole had a split fairway with a native forest area preserved in the middle. The design strategy was to take the harder route left and be rewarded with an easier approach into the green. We spent days building this green, perfecting the angles, bunkering, and grading. Finally, towards the end of the week, we had it finished; all the greens mix was in place and ready for planting the next morning.

“This happened in the fall when many of the animals are in a rut. The next morning, we came out to discover that two bull moose had decided to battle over a loved one in the middle of our green site. Alaskan bull moose are huge, approaching 1,400 pounds, and the battles over their cows last long and are extremely intense. We were blown away when we learned first-hand the amount of damage they can cause.

“The fine grading of the green surrounds, left the day before, looked like they had been ripped and plowed with a bulldozer’s deep tines. Irrigation pipe and wiring were jaggedly and randomly sticking out of the ground in all directions. Much of the herringbone drainpipe system – intricately installed 16” below the putting surface – was pulled up to the top and looked like it had been tripped over and entangled around the hooves and legs of the dueling beasts. The expensive infrastructure and aggregates (for USGA-style greens) were completely destroyed and the entire green site was devastated and way beyond a simple repair.

“The moral of this story: If you ever see moose in a rut and they’re destroying a valuable piece of property, just let them go and don’t interfere. You could end up looking like a corrugated crushed section of the perforated drainpipe.

“I’ll also never forget the first time I went out to play Moose Run after it opened. On the first hole I sat waiting for a lady in front of me to putt out. But she wouldn’t leave her golf cart. I drove up and discovered there were three black bears on and around the green and she was afraid to go get her ball. I finally slowly walked up and got it for her. I wouldn’t have been that brave if they were Alaskan brown bears.”

Note to Readers: What critters have you encountered on golf courses? Please send your stories to me at fairgreens@seanet.com and I’ll use them in a future installment of “Making the Rounds.” Be sure to include your full name, phone number, email address, job title, place of business and, if available, a high-res (and copyright-free) jpg photo. Thanks – this could be fun!

Jeff Shelley has written and published nine books as well as numerous articles for print and online media over the past 32 years. Among his titles are three editions of “Golf Courses of the Pacific Northwest.” He also co-authored and published “Championships & Friendships: The First 100 Years of the Pacific Northwest Golf Association.” The Seattle resident co-founded the Northwest Golf Media Association in 1995, and served as the president of First Green, which is now part of the Golf Course Superintendents Association of America.