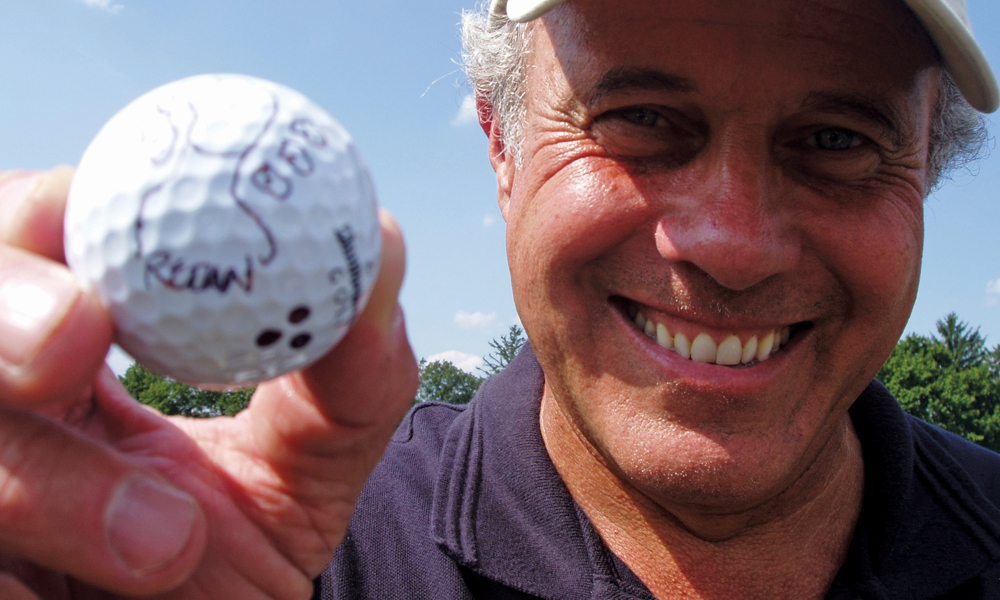 Call it “The Core Sample Heard Round the Golf World” – the day golf course architect Stephen Kay made a discovery of historical import at fabled Forsgate Country Club in New Jersey.

Kay is New York City’s homegrown world-class golf course architect – their favorite son, so to speak. When he was in high school in Queens, he doodled golf holes on his notepad when he got bored, as all golf-loving teens do. But then Kay took it further; he asked his guidance counselor to help him become a golf course designer.

This, by the way, was in between taking differential calculus, “for an easy A, that’s how sick I was,” he quipped. Kay was quite the math whiz, but you tell me which job is more exciting: golf designer or actuary?

After studying at Syracuse and Michigan State, Kay achieved his childhood dream and rose to national prominence not only for his triumphant original designs like Links of North Dakota and Manhattan Woods, (with Gary Player), but also for his doppelganger-like ability to recreate the work of other designers, whether it was through restorations like Seawane and Shackamaxon or his pastiches like McCullough’s Emerald Links and the Architect’s Club.

But Kay’s greatest restoration is also his indisputable, landmark contribution to the Pantheon of Great Golf Architectural Achievements: the restoration of the Banks Course at Forsgate Country Club in New Jersey.

It was 2007. Developer Chris Schiavone’s RDC Group had bought the club and hired Kay to restore the course to its Golden Age glory. Opened in 1931, Forsgate is the last course of the most important Bloodline in American golf architecture – Charles Banks, Seth Raynor, and Charles Blair Macdonald, a bookend to a list of courses that began with National Golf Links of America.

Forsgate weathered the hard years of the Depression well – founder John Forster had the wisdom and prudence of a farmer after all, and his investments stayed sound. But the intervening years and owners presided over the typical steady decline in maintenance and mowing patterns that plagued golf courses between 1940-1990.

Most notably, many of the greens had shrunk in size, an unpardonable sin, because when you talk about Forsgate the discussion begins with the greens. They are unquestionably among the greatest of any course designed by the Bloodline, and that includes such masterpieces as National, Yale, Fisher’s Island, Mid-Ocean, Shoreacres, and Camargo. Almost all of the great templates are here, including a gargantuan Reverse Redan, a perfect Horseshoe, a unique Punchbowl set in a gorgeous dell, and a double plateau fiendishly clever in its intricacy.

And while each green of the Banks Course is downright masterful, all eyes were on 17, the Biarritz hole.

“The main feature of a Biarritz is the big, deep swale,” explained Kay, describing the six feet deep and thirty-foot wide valley floor that, at that time, was the front entrance of the green.

“Some Biarritzes have the swale in front of the green, and some have it inside the green itself. With the size and depth of that valley, we were suspicious that the swale was supposed to be in the middle of the green,” he stated.

So Kay brought out the soil probes and set to solve the mystery. He started by taking soil from the middle of the fairway and from the rough to see the composition of the native soil.

“Then I went to the middle of the green to see what’s below the top three inches of topdressing, and radiated outward, two feet at a time.”

There was palpable suspense that day; everyone knew what was at stake Waiting for the results of the probe was like waiting for the white puff of smoke from the Vatican chimney, indicating whether a new pope has been elected.

At a certain point, Kay walked out of the valley and continued well into what was mowed as fairway at that time, and they knew. It was a watershed moment for both the club and golf architectural history.

“We found where the soil changed in color and texture from what was beneath the green to what was beneath the fairway, and that’s how we know where the green ended,” he stated. “It turns out the front and back sections were roughly equal in size. The green was meant to be triple the size at which they had been playing it. We were all excited about it because we knew it was something special. Only C.B. and Seth and Steamshovel built swales with the sheer size and depth of that valley. Everyone loves Yale’s green, and ours is pretty much the same,” he said energetically.

And so Kay, Schiavone, and the crew set to work on one of the great restorations of this Second Golden Age of Golf Course Architecture. Over a full year and a half, the club slowly lowered the mowing heights of the front section, while simultaneously core aerating and filling the aerations with topdressing.

“We had to smooth the corners of the valley by taking the sod off, and re-grading it by hand, and putting new poa/bent sod on to replace the old so that it didn’t get scalped by the mowers,” Kay recalled. It wasn’t the easiest of jobs. After all, “steep and deep” is the order of the day when it comes to both the green contours and the bunkers at the Banks course.

“It was tough to mow the ridges that lead in and out of the swale,” explained head golf course superintendent Don Asinski. “I had to order a new triplex mower with all-wheel drive specifically for that green to get up out of that swale!”

All the work was worth it, as the restored 17th – all 20,000 square feet of it, 75 yards from front to back – has taken its rightful place as one of the great greens in American golf. Players and critics alike hail its boldness, its pristine conditioning, and its historical import.

“17 on the Banks course belongs in a museum or a textbook or both,” gushed golf expert Bruce Moulton. “it’s so much fun watching a 180-foot putt go down one swale, across the valley and back up the other side, before curling cozily next to the cup for the best lag of your life.”

A similar core sample indicated that the double plateau green at the 16th had also shrunk in size and needed to be expanded.

“The other important thing we’ve been doing is mowing the collars down so the green and fairway blend seamlessly into one another and so you have all kinds of options around the greens. It’s quintessential Banks,” Kay confided. “This is critical because that’s the way the course was designed and meant to be played.”

It’s impossible to overstate the success and import of Schiavone and Kay’s work at the Banks Course. Schiavone has developed a wildly successful cottage industry of revitalizing forgotten Golden Age golf courses, and Forsgate is his magnum opus to date. By preserving and promoting strategic golf architecture and faithful restorations, they have their hand firmly on the pulse of the golf zeitgeist, and all golf is better for it.

New Sage Run course in Michigan set to open from Albanese
GIS Conference and Trade Show Wrap Up!
To Top