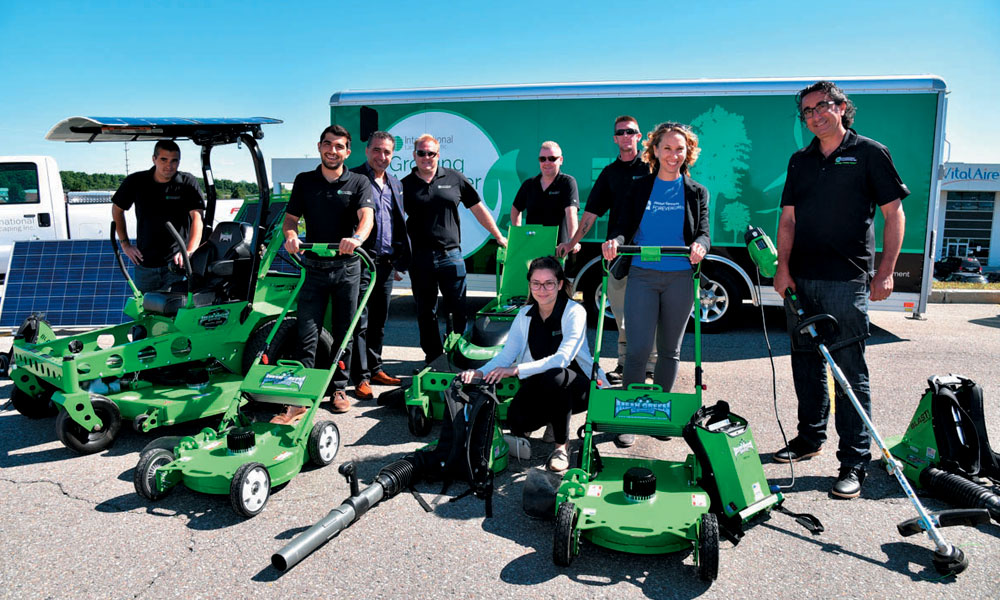 If we told you that Mean Green Mowers are quietly getting the job done, we’d have to smile and add, “Pun intended.” When you make the choice to replace your fossil-fuel powered tools with electric mowers and maintenance equipment, you immediately reduce noise. The rumble and roar of gas-powered mowers and other maintenance tools, particularly when used in the early morning hours, are frequently the number one complaint received by golf courses, especially if the course is adjacent to residential housing or hotel properties.

However, sound abatement is only one of the many important ways turf managers and superintendents reap meaningful benefits when they put battery-powered tools to work on the golf course. The use of clean and environmentally green electric equipment yields measurable reductions in emissions, fuel consumption and equipment maintenance demands. Although finding electric equipment that could compete with the performance and endurance of gas-powered tools was once a challenge, innovative companies, such as Ohio-based Mean Green Products, have leveled the playing field with mowers that are as powerful and enduring as they are quiet and cost efficient.

No golf course is immune to the complaints of irate locals whose peaceful slumber is disrupted by noisy leaf blowers and mowers. Whether it is an enclave of residences that back up to the fairways and greens or a resort with vacationing guests, when you wake people before their morning alarm sounds, they tend to voice objections, even if they are the very same club members or resort golfers who will complain just as strongly about a course that isn’t properly maintained. 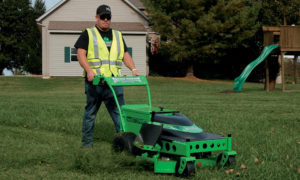 Some golf courses face noise abatement ordinances that prohibit early morning mowing. In the ultimate can’t-win conundrum, those same courses may also face intermittent smog regulations that require mowing be done only during those same morning hours in which mowing ironically is prohibited by the noise abatement ordinance. Making the change from gas-powered to electric, battery-powered mowers can be the optimal solution for turf managers forced to juggle their maintenance schedules around both noise ordinances and air quality regulations.

The South Coast Air Quality Management District (SCAQMD) is the air pollution control agency for Orange County, CA, and the urban portions of Los Angeles, Riverside and San Bernardino counties, some of the worst smog-ridden counties in America. In 2015, SCAQMD used an EPA grant to purchase seventeen battery-powered, electric mowers from Mean Green. These mowers were then distributed to government agencies and non-profit organizations.

SCAQMD estimates that for every gas mower it replaced with an electric mower, airborne, smog-forming emissions and fine particulates were reduced by more than 600 pounds per year. With zero gas consumption and an operating efficiency of nearly ninety percent, electric mowers are proving that communities can be environmentally green yet still save greenbacks in the process.

When golf course superintendents say “yes” to component based, battery-powered electric equipment, they are saying “no” to the downtime and repair headaches of internal combustion engines. With no spark plugs, air filters, oil, or oil filters to clean or change, no carburetors or injectors to rebuild, and no hydraulics, belts, pulleys, clutches or fluid of any type, it’s easy to see how time and labor savings add up quickly when a golf course makes the switch to electric mowers.

Although electric mowers cost more initially, long-term savings offset the purchase price so significantly, that it is possible to finance your purchase and still save money on your operational and maintenance costs. Because Mean Green doesn’t leave anything to guesswork, it has done the math for you, providing a preconfigured spreadsheet (visit www.meangreenproducts.com/money-savings/) that allows a course superintendent or turf manager to calculate precisely the operational costs of a Mean Green commercial electric mower as compared to a gas mower over the respective life cycle of the products.

The Electric Advantage: There’s a Reason They Call It Mean

Although Mean Green Products is today one of the leading manufacturers of commercial-grade, cordless equipment in the U.S., like many success stories, the business was born out of frustration.

Since high school, Hamilton entrepreneur Joe Conrad had successfully built and then sold companies including a flight school, an air charter company, and several affiliated niche businesses. In 2007, at the ripe old age of 41, he found himself semi-retired. With a little extra time on his hands, Joe might have found the task of mowing the five-acre lawn of the home he shares with his wife Chris and their three children relaxing had not his gas-powered, zero-turn mower given him one problem after another, despite Joe having replaced the mower’s hydraulic pumps. Wondering why no manufacturer offered an electric mower that was up to the task of handling his backyard, Joe tackled the problem himself, setting out to build the mower he recognized the marketplace needed. Working with his son Matt, Joe began writing the next chapters in his success story: Mean Green Products.

But everything about Mean Green’s mowers was about to change. By 2012, with continued research and refinement of their products, Joe and Matt were ready to release lithium battery-powered, zero-turn mowers and walk-behind mowers. Designed with the same technology used in the newest electric automobiles, the use of lithium-based battery packs resulted in mowers that were significantly lighter in weight than previous electric models, yet they delivered greater power and more agility than any of Mean Green’s earlier designs.

Ready to compete head-to-head with their gas-powered counterparts for power and endurance, lithium battery-powered commercial mowers can mow continuously for up to seven hours on a single charge, providing true, all-day performance. When it’s time to repower, Mean Green’s intelligent chargers safely charge the battery and then stop the process, ensuring that overcharging never occurs.

With huge operational savings and as much or more power than gas engine mowers, Mean Green Products claims its mowers are the only commercial mowers that can pay for themselves in fuel savings alone. However, innovative Joe, hasn’t stopped with these successes.

In 2016, Mean Green rolled out S.A.M., its Solar Assisted Mower. Capable of assisting in its own recharging, even when it is in operation, S.A.M. is revolutionizing electric mowing, making true off grid mowing possible.

Always on the cutting edge, Mean Green is launching its Nemesis 48”/52” prosumer/light commercial zero turn mower this year. Built from lightweight aluminum and high strength steel and weighing in between 590 and 650 pounds, the Nemesis is strong, agile and ideal for both commercial or residential use.

With a 48-volt battery, peak horsepower of 24hp and a battery recharge time of three to six hours, the Nemesis is unquestionably mean. Now, factor in its smooth driving, ride-rite suspension, low center of gravity, zero emissions, zero gas, quiet 75-77 decibel sound output, and the fact that it delivers an average operational savings of $5.00 per hour, and it’s no surprise that Mean Greens Products have named this the Nemesis, proclaiming that the downfall of gas mowers has arrived.