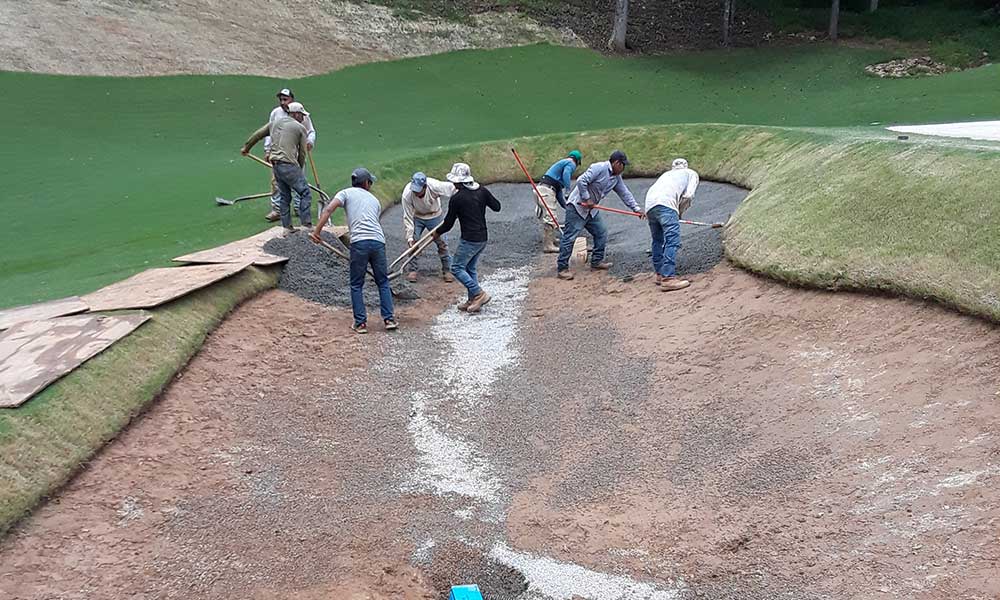 Mountain golf is generally picturesque and can offer some of the most interesting courses in the world, but the nature of mountain environments means that climatic conditions are often extreme.

Such is the case at the 27 hole, Joe Lee-designed Big Canoe GC in the north Georgia mountains. “We get a lot of rain, over 70 inches a year, so soil erosion is a big problem for us, and bunker erosion is a major part of that,” says superintendent Lydell Mack. “Water control and drainage are very high on our priority list.”

Big Canoe partnered with golf architect Bill Bergin to do a long-term course masterplan back in 2018, and dealing with the course’s bunkers was a key component of the plan. “Previously, we had steep sand-faced bunkers – not massive, but still large enough to be a significant maintenance issue for us,” says Mack. Bergin and the club both agreed that a high-quality bunker liner was necessary and that the Capillary Bunker system was the right choice.

The club chose to execute the bunker work on its Creek nine in 2021, hiring Tennessee-based contractor Sanders Golf to handle construction. “Sanders has installed Capillary Bunkers in the past and were very familiar with it, so the build went very smoothly,” says Mack. “It took eight working days to rebuild sixteen bunkers, improving external drainage and changing the bunkers to grass faces as well as installing the liner. The other two nines will be completed in the next five years – in 2023 and 2025. And, of course, they will be Capillary bunkers too!” Although it is early days for Big Canoe’s new bunkers, Mack reports excellent results already. “We’ve had two tropical storms come across us with four or five-inch rainfalls associated with them,” he says. “One morning, after one of those storms, I was giving a course tour of the redone nine to some members. We stood on the first, which was done, and looked at the ninth, which wasn’t. The non-upgraded bunkers were completely destroyed, totally washed out, while the new ones were not washed out at all. We maintain 27 holes with sixteen guys – a small crew for a large facility, so anywhere we can save labor is a big help for us. We can provide a better product for our members as a result.”