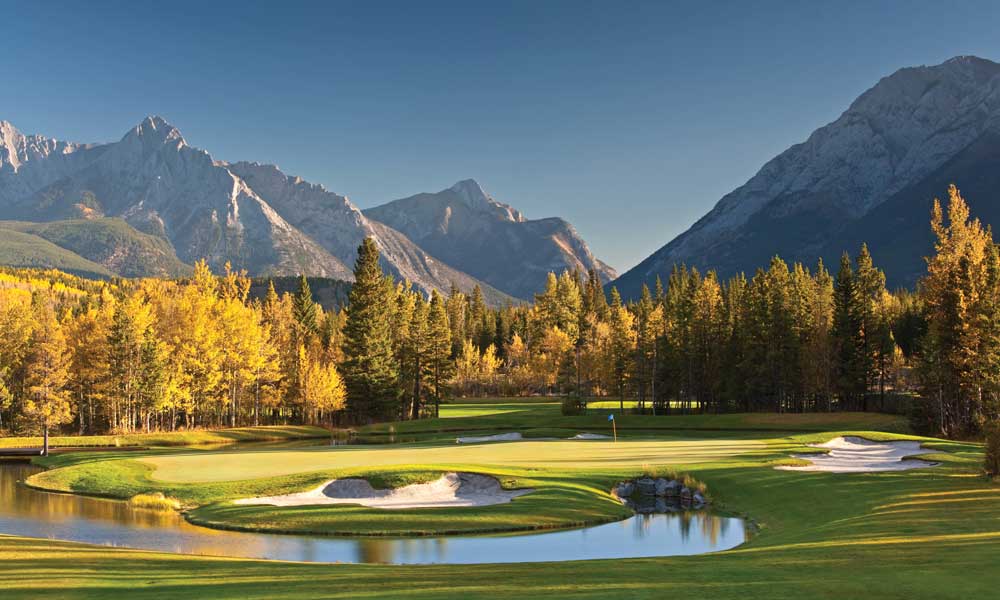 It’s just before sunrise on September 25th, 2012 and I’m standing, camera and tripod in hand, on the tee box on the iconic 4th hole at the Kananaskis Country Golf Course in the stunning Canadian Rockies. Just before 8:00 am the sun crests the scissor-sharp mountains and gorgeous, low-angled light paints the scene. A few “clicks” later and I have the images I need. Little did I know that, come spring, this famous hole – and 31 others – would be devastated by Alberta’s “Flood of the Century.”

Unfortunately, natural disasters are occurring throughout the world this very moment. From Texas to Timbuktu, Fort McMurray to High River, floods, fires, droughts, hurricanes, and tornados are wreaking havoc. Lives, businesses, towns and cities are being turned upside down. And, obviously, golf courses have no immunity.

“Floods are the most common natural disaster that golf courses have to deal with,” says Charles “Bud” White, a USGA agronomist, author, and consultant specializing in natural disasters that occur in the golf industry. “Many courses are built in valleys, along coastlines, beside rivers, and these are the areas that are most prone to flooding,” says White, who has consulted on over 100 projects (mainly flooding disasters) in the past fifteen years, or so.

Torrential rains, like what triggered the Alberta flood in 2013 (30 golf courses were affected and a couple were completely destroyed) are often the catalyst. In that particular event, up to a foot of rain fell in some areas in the foothills west of Calgary in just a couple of days.

However, in the case of Katrina, where White estimates up to 50 golf courses were damaged and a couple also completely destroyed, it was one of the most destructive hurricane events in history – as well as catastrophic levee breaks – that caused the mayhem. Nobody will ever forget it. And the golf industry is still trying to learn from it.

“People often aren’t prepared for disasters,” says White. “For golf courses, having a written
emergency plan is critical. Many courses are caught flat-footed when the rain comes. There are also many things courses can do to protect themselves before a destructive weather event occurs.”

And, not surprisingly, much of that prep work isn’t rocket science. While some of the preparation is as simple as locating suitable high ground to move equipment (mowers, power carts, etc.) when waters rise, some of the work can involve significant changes to important infrastructure. For example, moving or rebuilding greens and tees on higher areas can often make the difference in terms of their survival. Also, repositioning maintenance buildings, pumphouses, and satellite stations to high ground can save a lot of headaches down the road. Also, establishing relationships and a plan with suppliers that will be needed during an event is a key. Waiting weeks for pumps and silt removal equipment won’t work in your favour when it’s crunch time!

But, of course, when a once-in-a-lifetime meteorological event occurs, avoiding a disaster might be impossible.

Unquestionably, the meteorological mayhem that started on June 19th, 2013 in Alberta triggered a history-altering event for the
Kananaskis Country Golf Course. A flagship course in the Canadian Rockies, Kananaskis took a severe blow. When it was all said and done, the “new” images of the course – unrecognizable golf holes scattered with debris, turf ripped to shreds, cart paths buckled, trees mangled, creeks re-routed – weren’t pretty. Powerful and telling? Absolutely.

The course, which is owned by the Provincial Government of Alberta, has remained closed since the flood. However, a rebuild plan is finally in place and the course is scheduled to re-open in 2017.

“We waited a long time for that initial news to come down,” recalls General Manager, Darren Robinson. “Our fate was in the government’s hands and the two years after the flood were difficult for us, as it was for thousands of Albertans. It was tough to come to work every day not knowing your future and the future of this amazing facility. Two of the most beautiful and recognizable courses in Canada were sitting here, literally, rotting away. The silt and debris was over eight feet deep in spots. There were over 2,000 dead trees littering the courses.”

Sadly, for most courses, government help, especially in the United States, is not going to be part of the equation. Even with widespread and ongoing damage in places such as Texas, Mississippi, and Arkansas, among many others, federal assistance is hard to come by.

“Unfortunately, the federal regulations excluding golf courses from participating in any of the federal disaster relief programs are still in effect,” says Ronnie C. Miles, Director of Advocacy and Commerce for the National Golf Course Owners Association.

“President Obama’s American Recovery Act and Reinvestment Act of 2009 placed golf courses in a small group of restricted businesses, which includes casinos, zoos and swimming pools, that are prohibited from participating in any federal relief programs offered through FEMA and the SBA.”

Obviously, the golf industry is fighting back and trying to change this. “The ‘We Are Golf’ coalition, which includes the NGCOA, PGA, USGA, GCSAA and the World Golf Foundation, was formed for the intended purpose to collectively address this and other legislative issues,” says Miles. “Last month, as part of National Golf Day, members of the ‘We Are Golf’ coalition met in Washington, DC for the purpose of bringing attention to and requesting our legislators to address this and other issues.”
Regardless of where help is coming from, the first big “issue” for flood-damaged courses (besides sorting through the critical issue of insurance, which would be another feature-length story on its own!) is removing the silt that is typically left behind when the water recedes. “You’ve got to get it off as fast as possible,” says White. “How much time you have depends on the type of grass. Bermuda and zoysia can withstand longer than colder climate grasses. It’s often a race against time.”

Thankfully, in the close-knit golf community, help from “within” is often the life-line that makes all the difference. Courses lending labour, equipment, and supplies to one another in times of a disaster are par for the course. Volunteers and members helping out can also be instrumental in recovery.

“The golf industry is resilient,” says White. “There are countless stories I could share where people did the impossible to save a course, a fairway, a green. Every disaster is different. You never want to go through it but, without a doubt, if you do, you’re going to learn something…the hard way.”

Andrew Penner is a freelance writer and photographer based in Calgary, Alberta, Canada. His work has appeared in many leading golf publications throughout North America, including Golf Magazine, Golf Digest, The Golf Channel, Golf Canada, and SCOREGolf Magazine.

Oakmont’s John Zimmers
The Power of Re-Powering
To Top