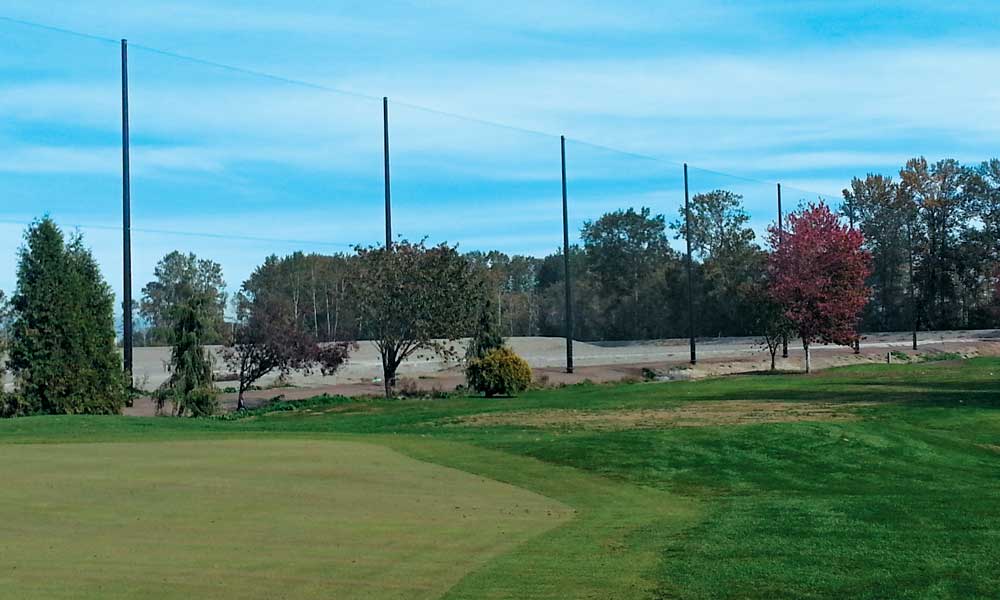 For six generations, Mark Wilson’s family fished the cold Pacific waters off the coast of British Columbia, earning their living as commercial fishermen. But in 1997, Mark literally and figuratively, cast his net in a bold new direction.

After fulfilling a contract job repairing a driving range net at the Delta Golf Centre in his hometown of Ladner, Mark took a long hard look at his prospects for the future. If he continued as a commercial fisherman, a host of challenges from environmental issues to fuel costs to the unstable economy lurked in the waters ahead. To make matters more complex, emotionally-charged topics, such as native fishing rights, were confounding commercial fishermen with well-intentioned regulations that made a demanding profession even harder.

In contrast, the sport netting market appeared to be both growing and underserved. Using the net making artistry and skills he had learned from childhood in his family’s fishing business, Mark made the decision to rent a facility and launch Netex Netting Inc.

Initially serving area golf courses and sport facilities, Netex’s business soon expanded within Canada and into the U.S. Among the company’s first clients in the United States were schools and universities. Although Netex has always had competition from larger manufacturers, it remains the only company in Canada that fabricates its nets and then installs the products it has designed and built.

Delivering turn-key service, Netex provides project planning and design and then builds a net to the client’s custom specifications. When installation is part of the contract, the process includes complete certified engineering on all structures, no matter where in the world they are located.

Reflecting on his company’s work, Mark said, “Netex has taken its engineering to a higher level than most other net companies and has certified wind tunnel testing on our golf nets and baseball netting styles. We’ve served clients throughout North America, in Australia and even South Korea, where we provide stadium netting for the South Korea KBO league, with backstop nets for five of the nine professional baseball teams in the KBO league already installed.”

Netex sport netting systems are built on generations of experience and acumen in building nets for commercial fishing. Mark explained, “I’d been taught by my brothers how to build nets, and I had worked with them when I was younger. The type of netting that we built for commercial fishing is the same way we now fabricate the perimeter rope edges for golf nets or baseball nets.”

Originally, Netex offered only polyethylene monofilament netting. Always in pursuit of a better product, Mark was intrigued by the netting used by Major League Baseball for backstop nets. That netting, he learned, is made from Dyneema fiber.

Dyneema fiber is produced from ultra high molecular weight polyethylene (UHMWPE or UHMW) that is stretched and spun to be super thin while delivering maximum strength with minimum weight. Products manufactured from Dyneema fiber are strong, light to handle and exceedingly durable.

Understanding the Power of Dyneema® Fiber

UHMWPE fibers are highly resistant to most corrosive chemicals, have extremely low moisture absorption and are exceptionally resistant to abrasion with a low coefficient of friction. Depending upon the structure and application, Dyneema fibers can have a yield strength as great as 350,000 pounds per square inch, making it, according to Dyneema manufacturer, Royal DSM, “…up to 15 times stronger than steel on a weight for weight basis.”

Recognizing the potential for even thinner sport netting than the back stop nets already in use by many MLB stadiums, Mark contracted “break and burst strength” testing of #15-gauge Dyneema net, including having the net tested for its capability to stop a baseball at 104 miles per hour.

Dyneema fiber nets work effectively for spectator and barrier netting at hockey arenas, golf courses, baseball stadiums and other sport field applications. Because the fiber used in Netex nets is so thin, when installed in a stadium or athletic field, it is virtually invisible to the spectator.

“Netex,” said Mark, “has the most invisible netting with the lowest wind load rating for a golf barrier net worldwide. Netex offers the widest pole spans, which translate into the most transparent design offered in the golf industry. No one can span the distances we do.”

Wider pole spans reduce the cost of installation and add to the spectator’s experience by enhancing the overall look of the installation. When black netting is preferred to decrease the visibility of the netting further or for aesthetic reasons, Dyneema black fibers are not coated, but are integrally black, providing long-standing color with high UV resistance to fading.

Taking attention to detail to the next level, Netex Netting Inc. has an exclusive agreement with Valmont Industries of Nebraska. Valmont, with annual sales of 3 billion dollars per year and 9,500 employees, has 92 manufacturing facilities around the world, including pole manufacturing in the USA, Canada, Mexico, Australia, China, India, UK, France, Poland, Germany, Netherlands, Finland and Morocco, making it the largest steel pole manufacturer worldwide. All Netex projects with Valmont poles include structural engineering that meets local design standards and site-specific wind loading on the Netex Dyneema netting system.

When Mark started Netex, now almost twenty years ago, he laid his business plans with deliberation. He began with one employee and a plan to grow the business, but he was calculated and conservative in his approach.

Many of Netex’s original employees were family members; the same is still true today of the less than a dozen people who work for the company. Production at Netex is done by hand, and it happens in a facility that is noticeably devoid of high tech bells and whistles.

Mark resisted having a web presence as long as he could, preferring to conduct his business face-to-face, meeting many of his clients through trade shows and word-of-mouth referrals. Although www.netexnetting.ca gives the company an online presence, don’t look for information about golf course netting there. If you are interested in netting for your facility, pick up the phone and call the company at 800-936-6388. Unless you’ve called after hours, a real person will answer the phone.

The team at Netex still does business the old-fashioned way, with personalized, hands-on service, which allows them to ensure that their high standards of quality control are never compromised. As Mark observed, “If you go too big, you lose some of your quality control. One bad job can turn you around for a few years.”

Welcome to the Net Shed

Netex has long ago outgrown the original space Mark rented to house his company. Today you’ll find Netex in a unique building that once protected potatoes from harsh Canadian winters within its ten-inch-thick walls.

Scrubbed and painted, the structure dubbed the “net shed” affords more than 6,000-square-feet of space for fabricating nets and storing the company’s extensive inventory of netting fiber. Visitors to the net shed tend to linger, as charmed by the space as they are captivated by the atypical company itself. Perhaps they sense the remarkable significance of modern technology enfolded in an art form that is nearly as ancient as civilization itself.

Where are the Best Candidates?
Fannin Tree Farm: Taking Care of Trees for Nearly 40 Years
To Top