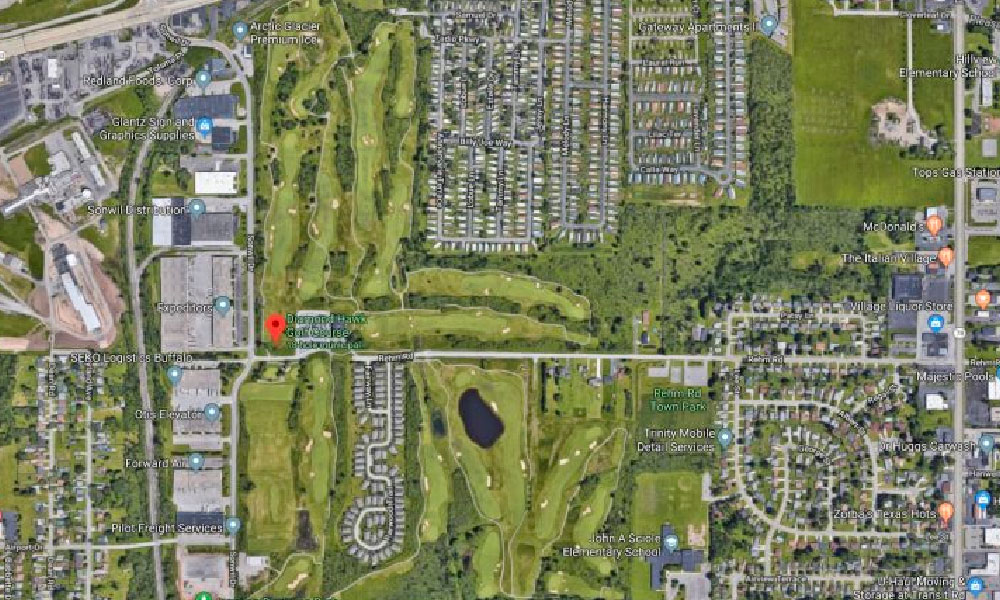 After being on the market for sale for two years, one of the area’s newest golf courses is now going up for live auction.

The retired owner of the Diamond Hawk Golf Course & Banquet Facility in Cheektowaga is putting the 198-acre property on the block later this month through Chartwell Real Estate Auctions and Hanna Commercial Real Estate’s Cleveland office.

Located at 255 Sonwil Drive, near the Buffalo Niagara International Airport, the course was developed by real estate investor and current owner Samuel Tadio at a cost of $6.9 million.

Tadio, of Garrett LLC, had long dreamed of building a golf course, and town officials had separately talked of it on and off for about three decades. But it only got into the ground after former Town Supervisor Dennis H. Gabryszak began talking with Tadio in 2003. Planning began a year later.

It opened in May 2006 under a 40-year land lease with the Town of Cheektowaga, which was signed in 2002. The lease calls for the course to revert to town ownership at the end of the lease in 2046, but it can be extended until at least 2056.

Under the lease, Tadio paid the town $590,000 to cover the remaining debt on bonds that Cheektowaga issued to buy the property. Separately, the Erie County Industrial Development Agency approved a tax incentive package to support the project. Cheektowaga residents receive a 20 percent discount on greens fees.

Diamond Hawk features an 18-hole championship golf course designed by Michael Hurdzan and built by Wadsworth Golf Construction Co., with a practice facility that includes a driving range, chipping and putting greens, and a bunker.

The property also includes a 7,200-square-foot clubhouse overlooking the course, with men’s and women’s locker rooms, a pro shop, an upscale restaurant and banquet facility for up to 175 guests, and an outdoor covered patio with a bar. There’s also a cart barn and a 6,000-square-foot building with a machine shop, superintendent’s office, and employee break room.

“Sam Tadio has made a decision to sell the golf course, restaurant and banquet facility and close the transaction during 2019,” said Gordon Greene, Hanna Commercial broker and an auctioneer with Chartwell. “He wants to send a clear message to the marketplace that he is selling to preserve an important community asset.”

Already, the auction has received interest from groups located in Ontario, upstate New York and New York City, as well as other neighboring states, Greene said. Any sale is subject to the town’s approval.

The auction, scheduled for 11 a.m. Sept. 27, carries a minimum published reserve price of $625,000. Onsite inspections will be available from 1 to 3 p.m. Sept. 21 and 25, and registration on the day of the auction starts at 10 a.m. Registered bidders must have a $50,000 cashier’s check on hand, payable to Stewart Title Insurance Co. as the escrow agent.