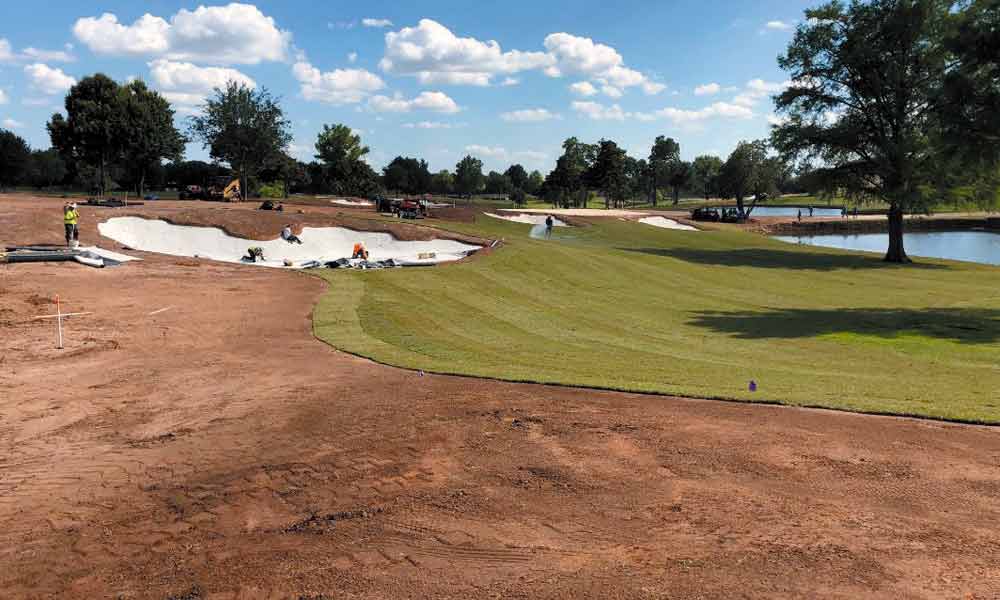 In our March 2015 issue, we introduced our readership to Bill Coore and Ben Crenshaw’s ingenious restoration of Perry Maxwell’s Old Town Club in Winston-Salem, N.C. (https://www.golfcoursetrades.com/old-town-club/) Old Town, built-in 1940, represents a high watermark in golf design because it brought an end not only to Maxwell’s design career, but also the first Golden Age of Golf Course Architecture in America. It’s an important milestone for both Maxwell and golf history.

This month we’re going to examine another important and fascinating marker in Maxwell’s career arc. Oklahoma City Golf & Country Club opened in 1927 and host of the 1953 U.S. Amateur (won by Gene Littler) marks the first collaboration of Maxwell with Alister Mackenzie, a relationship that would ultimately give us Augusta National and Crystal Downs. So it raises some fascinating questions. In what ways did Mackenzie influence Maxwell? In what ways did Maxwell influence Mackenzie? What did each bring to Oklahoma City Golf & Country Club? And what did they bring from OKGCC forward to designs they created afterward?

“Before their collaboration even began, Mackenzie wrote Maxwell a letter praising his work and saying he was one of the most naturalistic architects he’d ever seen,” explained golf architect Tripp Davis, who is overseeing the restoration and renovation project at OKGCC. “The thing that caught Mackenzie’s eye about Maxwell was how naturalistic Maxwell’s features were, and how his routings fit the land so perfectly. The golf courses Maxwell built really showcase the most interesting features, and make you hit strong golf shots to overcome the challenges posed by those features. And OKGCC, in particular, is on a great piece of property with lots of rolls, and the routing that they did together hits all the best parts of the property, and it feels as though it’s a natural extension of the land.”

Davis is absolutely right. The out and back, asymmetrical routing of Oklahoma City are rich in character. Better still terrific horizontal sweeps to the fairway blend perfectly with all the vertical movement in the earth. And best of all Mackenzie helped bring Maxwell’s green contouring and bunkering to an even higher level.

“I think greens and green settings were one area where Mackenzie had a great impact on Maxwell. The greens at OKGCC have lots of Mackenzie’s grand, sweeping contours, constant movement,” Davis said. “You see his grander scale in the size and the contouring not only here, but at Maxwell’s designs going forward, like Southern Hills.”

“What I love about the greens is the way Maxwell and Mackenzie made both the internal contouring and the green complexes themselves fit the land so perfectly, while also building greens that feature rolls and tilts from back to front, but from front to back and side to side as well,” added Head Superintendent Nathan Newmann, who came to OKGCC by way of Colonial Country Club. You’ll recall Colonial not just as a long-time PGA Tour stop and 1941 U.S. Open venue, but also for being home to one of Maxwell’s more recognizable stretches of golf, the Horrible Horseshoe: holes three, four, and five, a brutally long and well-bunkered par-4-3-4 sequence.

“As you look at Maxwell’s courses from OKGCC going forward, you can tell it was the beginning of the second phase (or the end of the first phase of Maxwell’s career, depending on how you want to define it,” Newmann continued. “Colonial was finished in 1936, and you can see similarities between OKGCC and Colonial in how the doglegs are routed – always curving in awkward or demanding points – and how the green settings are similarly well protected by bunkers. Also, both courses feature severely rolling terrain. Nothing is flat. Everything rolls with the land.”

What a formidable team, by the way. Davis and Newmann are a potent combination: they both blend a mastery of their craft at the highest level, and they each have a deep understanding of golf design strategies and how to best showcase those with proper maintenance and conditioning.

On the on hand, you have Davis, originally from Georgia, but after playing golf for the Oklahoma Sooners and raising a family in Norman, he’s now as dyed-in-the-wool Oklahoman as Will Rogers or Johnny Bench.

“Not a Sooner born, but a Sooner bred, and when I die I’ll be Sooner dead. Go to heck, Tech!” he shouted joyfully. Davis is still basking on the glow of his highly celebrated restoration work at Engineer’s Club, a former PGA Championship and U.S. Amateur venue. That’s just the latest in a long string of wildly successful restorations of Golden Age clubs from across the country by his firm.

On the other hand, you have Newmann, a young rising star in full ascension in superintendent’s circles.

“Nathan may be a younger guy but been around the world a good bit too. He was terrific at Colonial for a while he was an assistant, and then at Wichita Falls Country Club he was one of the first guys in the country to use new bentgrass called 007,” Davis energetically noted. “The best thing about 007 in Texas and Oklahoma is its high heat tolerance. So Nathan’s developed a reputation for having great greens everywhere he’s been.”

Together they are restoring and preserving as much of Maxwell and Mackenzie’s as possible. 14 greens will be enlarged back to their original sizes, restoring formerly lost pin placements, while four more will be enlarged to add more hole locations. Better still, it’s not just 007 on the greens that have been a significant upgrade, but they also employed Latitude 36 Bermuda grass on the tees and fairways. These new, cold-tolerant grass strains were developed specifically for hot weather regions like Oklahoma. They green up faster in spring and have better density with a firmer leaf texture.

“We’re also installing a precision air system underneath the greens. It’s a drainage infrastructure that allows us to pull out excess moisture and allow the root system to breathe,” asserted Newmann proudly. “That goes hand in glove with the new irrigation system from Toro. We’ve got their newest smart system that relays direct communication. We have down to the second control so we can maximize water efficiency.”

Davis and Newmann’s work here is certain to once again shine the spotlight on both Oklahoma City G&CC and on Maxwell’s work in general. Students of golf architecture who cannot get to Augusta National for the Masters would be well advised to come here to see the strategic fairway rolls that Maxwell and Mackenzie used to well here, and then brought forward to the fairways of Augusta National.

“That’s something Mackenzie learned when he was overseas in the UK, and it’s likely he taught it to Maxwell,” Davis stated.

The restoration work should be completed by the end of this year.