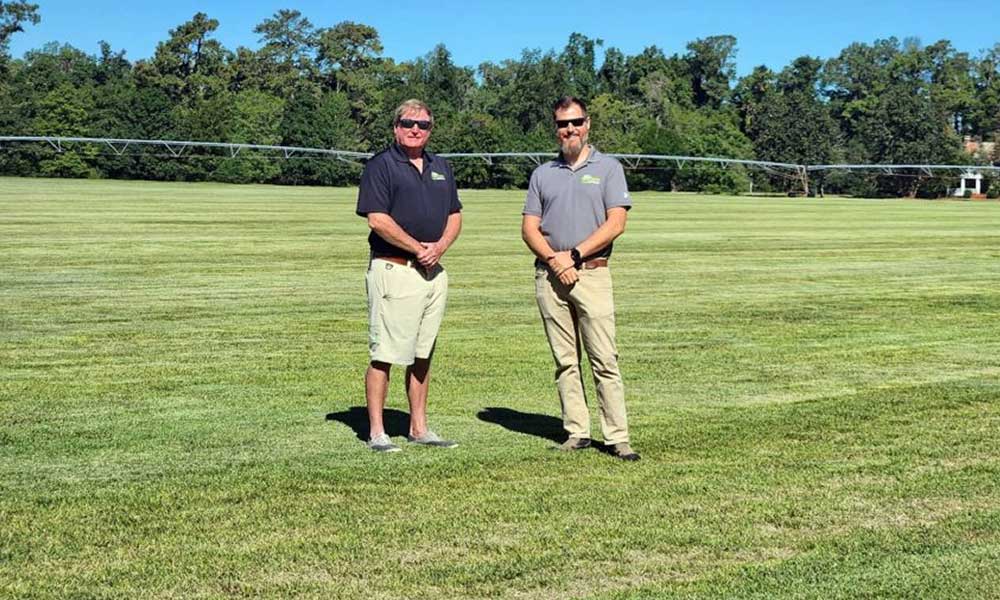 Oakland Plantation, situated on a bluff overlooking the Cape Fear River in Bladen County, was built over 200 years ago by General Thomas Brown, a Revolutionary War patriot. It is one of a few houses of its period in North Carolina still being used today.

In 1970, Oakland Plantation began the sod farming business with five employees and three acres of turfgrass. By 1972, the business had grown to 30 acres and the first shipment of sod left the farm on May 21, 1973.

“We gradually started growing grasses and expanding and converting from row cropping. We cleared a lot of land. We’ve also bought some remote farms nearby as well. So through the 80s-90s, we expanded a lot and in the 2000s we went down a little in acreage and probably stayed steady from there,” said Oakland Plantation’s General Manager, Will Neisler.

Today the business continues to grow with over 1,200 acres. Oakland has supplied some high-profile clients over the years, from the Baltimore Ravens to golf’s holy grail, Augusta National.

Will is taking on responsibilities at the farm from his father and President of Oakland Plantation, Rick Neisler who is now semi-retired. The history of their family involvement with the farm dates back to when Rick’s grandfather was invited to fox hunts on the property with the previous owner. When the previous owner passed away, Rick’s grandfather purchased the farm. Rick’s father, who worked in cotton textiles and also enjoyed hunting, decided they needed to find a way to generate revenue off of their land. One of his coworkers at the mill told him about his son that was selling turfgrass in Georgia and encouraged him to go check it out. So, Rick’s father went and checked it out and when he returned, he decided to plant sod.

Rick was in high school at the time his father and grandfather started the farm. He went on to graduate from NC State’s Turfgrass Program before coming back to become the General Manager of Oakland Plantation in 1980.

“We still do a lot of hunting. That’s a big part of how you keep four generations of a family happy. We have hunts in the fall with my 3rd and 4th cousins and family members. Sometimes we have our big customers and NC State faculty come to hunt. We use it as a way to kind of connect with people in the industry,” Will shared.

Will shared that two of his aunts and his uncle work at their farm. They consider it a family business. Like his dad, Will spent every summer as soon as he could be hired working on the farm. “I started stacking grass when I was 13 and I’d stack one for every five that the guys working here year-round would do. Then I did pretty much every odd job. I’d walk and spot bermuda and flag it and eventually be able to take over on some pesticide use and spray for weeds,” he said.

Then, Will started tagging along with the team for various installation jobs. When he was 14 years old, Oakland Plantation supplied turfgrass for the Baltimore Ravens NFL stadium. “That was a really cool experience and I came home with all kinds of Ravens gear,” he said.

When he turned 16 years old he was able to get into the tractor and start mowing. “I was very grateful for that job. I spent a few summers just mowing,” he said.

Will admits he took a winding path to get back to Oakland Plantation because he wasn’t intending to come back to the farm to work all along. He went to school for advertising and graphic design. Then he worked in commercial signage for five years creating technical illustrations.

When Will met his wife and they started settling down, he wanted to move closer to home. “I wanted to be a part of the history at the farm and carry the business into another generation as I helped my dad in his semi-retirement,” he said.

Although he’d done most of the jobs around the farm, when Will came back in 2015, he spent a lot of time watching and learning from others. Since he stepped into the role as general manager with no office experience, he quickly learned Quickbooks, billing processes, payroll and other HR systems. “Over the past couple of years, I’ve started trying to adapt and make changes to our systems that I felt were outdated. For the first half of the time I’ve been here, I’ve been trying to learn as much as I can about the operation. The second half has been more of me trying to step in and make changes I think will be beneficial for the farm in the long run.”

Rick said it’s exciting to see the sod farm transition from his parents, to him and now down to his son. “I’m very excited it’s going in that direction. It’s nice to keep it going. I do the fun things and leave everything else to Will,” he said.

Oakland Plantation steadily has 25 employees, with a few more in the summer. “We’re very lucky that we have people who have worked on the farm for a very long time. My dad has been President for 47 years. Our Production Manager is Tony McLean and he’s been here for 40 years. Our Farm Manager John Williams will have been here 20 years in May. There are other guys on our crews who have been here between 15-20 years and most of the rest have been here over 5,” Will said. “Our Scheduler for 22 years, Marilyn Beck passed away last year and we miss her a lot.”

He said they’re thankful for their strong crew of people that have stood by Oakland Plantation and been a part of the operation for such a long time, making them sustainable.

“We stayed up with the new varieties and figured out which ones fit us the best,” Rick explained. “We roll with the punches figuring out what’s going to work, and implement it and move on to the next thing. We used to grow grasses we don’t grow anymore. It’s a moving target based on what’s new and what the market wants.”

Oakland Plantation has been a part of the Sola research project and its expansion. “The origin point of Raleigh St. Augustine can pretty much be traced entirely back to our farm in the 1980s. A rough winter killed most of the Raleigh that NC State and Bill Gilbert had planted except for what we had here, so we repopulated it and most of the Raleigh today in the world, according to my dad, has origins here on our farm,” Will said.

They’ve been interested in a new St. Augustinegrass that would thrive in the northern N.C. climate. “Palmetto and Raleigh both grow here, but I wouldn’t say they thrive here. So we’ve been looking for something and Sola seems to do better. It’s still early but we planted Foundation Stock of Sola in June 2022 that next year we hope to be providing that to other turf farms,” Will said.

“These new varieties we just planted are for the future. We’ve got to get them into production for about two years out. So we’re not just looking at tomorrow or the next day, we’re looking years down the road,” Rick added.

Rick said relationships and networking with customers and industry partners contribute to a great deal of their farm’s success. “We grow a lot of really good varieties and have something good to show people, so that always makes it easier to be successful if you’ve got the right products. We work with Sod Solutions because their products are ones that I can make money with and that’s why we have a relationship,” Rick said.

Will is the current Secretary-Treasurer for the North Carolina Sod Producers Association (NC SPA) and Rick and Williams are both past presidents. Oakland Plantation has had 16 consecutive years of NC SPA board membership. Will has already announced he plans to step down at the end of his next term to allow for other farms to be represented.

Will said being a part of the turfgrass industry is very enjoyable. “I think that grass is a good product that at the end of the day is the cherry on top of a project. Like when someone is building a new home or development, the grass is one of the last things to go in. The area goes from looking like a construction site to a home. It goes from a field to a sports field, from some shaped dirt to a fairway,” he said. “I feel like it’s a unique place to be able to provide that.”

Rick is semi-retired and enjoys spending his extra spare time with his grandchildren or fishing for white perch in a nearby 10,000-acre lake. Although he’s working on other various projects now, he is still very involved at the farm.

Will said his dad’s leadership and drive took them from a small acre farm to where they are now, using his industry connections and relationships. “My dad knows people around the industry. He met Tobey Wagner from Sod Solutions in the late 90s. He knows various golf course industry professionals. Just making those connections and being part of industry groups helps you to know what grasses are coming down the pipeline and helps you make the right decision on what to start growing,” he said.

Will said golf courses have made Oakland Plantation successful because of being located roughly an hour from Myrtle Beach and the South Carolina coastal towns. “We set ourselves up to do golf courses in the 90s and for 20 years that was a huge part of our business. It’s less now because they’re not building golf courses as much, so we’ve downsized some of our bermudagrass acreage and changed to a different format of harvesting. We are more prepared for landscape installs which over the last 15 years has been a big change in our market,” he said. “Between Wilmington, Myrtle Beach and all the coastal towns they keep finding room to build more houses and I think my dad’s decision-making on when to make changes in our business were well-timed.”