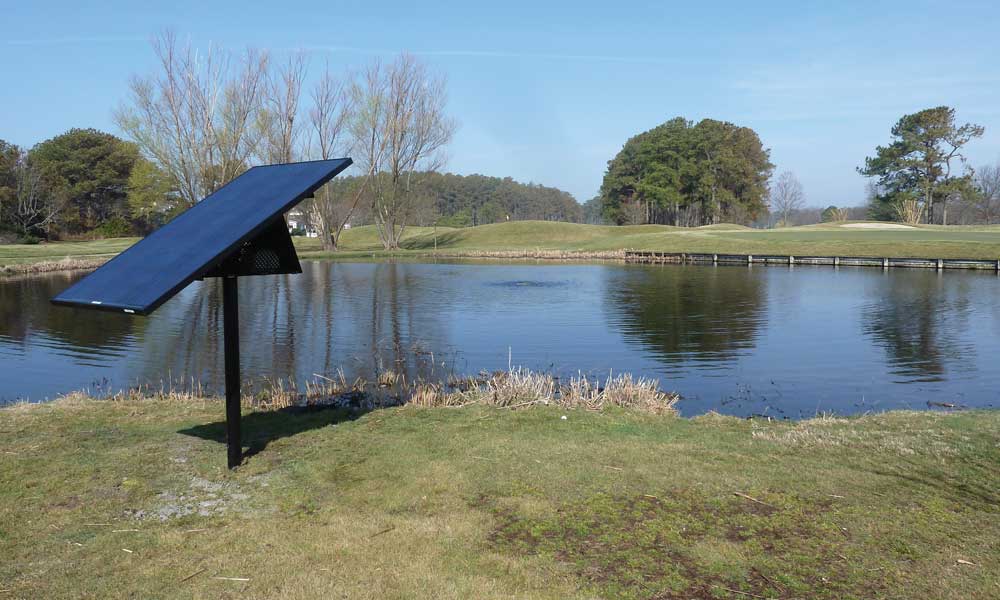 Sometimes our biggest challenges are found “in our own backyard,” and literally “right under our noses.” Such was the case for Craig and Sandra Burton who, in 2009, acquired a property in an established neighborhood with a pond positioned in a low-lying, gully area.

For some fifty years, this neglected pond with negligible outflow had collected stormwater drainage from the residential community. The result was a paucity of fish and wildlife, unsightly algae, a breeding ground in which mosquitos thrived, and the emittance of gas so noxious that people exposed to it complained of respiratory irritation and severe coughing.

As Craig investigated the problems of the pond, he recognized that this aquatic environment suffered from a buildup of decomposing organic material in its benthic zone, the scientific name for the sediment and first few levels of strata on the bottom of a body of water. Historically, when a lake or pond changed from healthy to murky, deficient in oxygen and overgrown with algae, the reaction by many people was to add chemicals.

Ironically, chemical-laden runoff water from fertilized lawns and gardens and other applications commonly accepted in residential or agricultural areas is one of the primary reasons bodies of water go stagnant. In fact, in many countries, the use of chemicals to treat algae bloom in lakes and ponds has been ruled illegal. Chemical applications may kill algae bloom, but they don’t eliminate the decomposing organic algae that find their way to the bottom of a water feature, thereby exacerbating the problem and increasing the water’s darkness, sludge, and decaying material, which then feeds the next algae bloom.

The Right Man for the Mission

Craig Burton’s career has focused on solar energy, specifically designing and building off-grid photovoltaic systems in southern Africa, South America, and Southeast Asia. His engineering accomplishments include the development of a photovoltaic power supply for a camera system on the Kilauea Volcano, a solar micro-grid system for the Ulu Temburong National Park in Brunei, a mobile solar power supply for the Botswana Defense Force, a solar water pumping system in the Dominican Republic and solar lighting systems for homes in Micronesia.

As a marketing product leader for GE Energy, Craig was already well versed in strategic marketing and product positioning for the company’s on-grid residential solar appliance “Brilliance” before he became involved in the product design and launch inspired by the green and stinky pond water in his own backyard. In view of his expertise and accomplishments, it seems obvious that the algae and mosquitos in Burton’s pond never stood a chance after Craig took on the challenge.

The result of Craig’s commitment to restore the neighborhood pond has been the development of the patented PondHawk® aeration solution, a fully integrated, solar direct, subsurface diffused aeration system that improves water quality in ponds, lakes, and lagoons. Today, the neighborhood pond is free from algae overgrowth and serves as a haven for fish, frogs, turtles, and at least one blue heron. The PondHawk solar aeration system is manufactured and marketed by LINNE Industries, a Newark, Delaware-based company that the Burtons founded in 2013.

From its minimalist design to its low-impact footprint, the PondHawk is a unique subsurface water aeration product that uses solar powered aeration to increase dissolved oxygen, eliminate stratification, and improve water quality and fish habitats. The powder-coated, tamper-resistant marine-grade steel enclosure that protects the product’s wires and tubing is designed to be positioned on a six-and-a-half-foot tall mast; however, the PondHawk can be installed at a lower height if preferred.

All components are “plug & play,” a system that virtually eliminates installation errors. The solar panel is typically positioned on a thirty-degree plane, and although dimensions may vary, in most installations the configuration of the solar panel is thirty-nine inches wide by sixty-four inches long. Explaining the design, Craig said, “Thirty degrees was chosen on purpose. The concept is to maximize the amount of power to the air pump during the time of year when the sun is positioned highest in the sky (summer) and aeration is needed most. Summer is the time of year when the pond needs to be circulated and de-stratified. Also, when the pond water is the warmest, it’s the best environment for algae growth.”

The entire device arrives fully assembled and weighs 110 pounds. Included as part of the system are the mounting structure and enclosure, the solar panel, the air compressor, a coiled, weighted airline, the diffuser platform and the industrial-grade diffuser, which arrives ready to connect to the airline. The product is designed to be fully installed in three hours or less. Although soil types vary, installations may require up to five fifty-pound bags of concrete mix to ensure a stable, long-lasting installation.

The process of installing the PondHawk normally disturbs less earth than the act of planting a tree. A single PondHawk services a body of water of up to one and a half acres, at a depth that is equal to or less than ten feet. Scalable by design, up to four diffusers can be attached to a single PondHawk that will stand sentry at the water’s edge, operating in near silence to restore or protect a pond or lake. Five steps are all that is required to complete the installation.

The PondHawk is designed to operate 365 days per year, requires no batteries and uses zero electricity. Keith Fellenstein, Director of Grounds and Course Management at Hermitage Country Club in Richmond, Virginia, describes the PondHawk in use at his course as a “silent warrior” that bubbles away, even in limited sunlight.

Whether a cloudy day or freezing weather, the system continues to work, delivering microbubbles of oxygen via a power supply that is backed by a twenty-five-year warranty. Other components of the PondHawk, including the compressor, are protected by a three-year warranty.

Although precipitation is normally sufficient to clean the glass, product maintenance requires cleaning the solar panel glass during periods of little to no rain or snow and servicing the compressor once every four years at a cost of less than $400.

In September of 2015, representatives of Delaware State University and PondHawk by LINNE Industries entered into a collaborative study. The project will measure aeration’s impact on pH, nitrogen, phosphorus, algae and mosquitos, while LINNE Industries concurrently tracks energy and maintenance costs, all with the purpose of determining the efficacy of selected pond management systems.

Researchers at Delaware State University’s Aquaculture Research and Demonstration Facility are conducting this first-of-its-kind study and the Delaware Bioscience Center for Advanced Technology has provided grant support for the research. LINNE Industries Cofounder, Sandra Burton, said, “The research project was driven from our work with golf course superintendents. We look forward to providing superintendents, course owners and communities with meaningful data to make decisions on their water features.”

To learn more about PondHawk or for updates on the findings of the DSU/LINNE Industries research study, visit the company’s website at linneindustries.com.