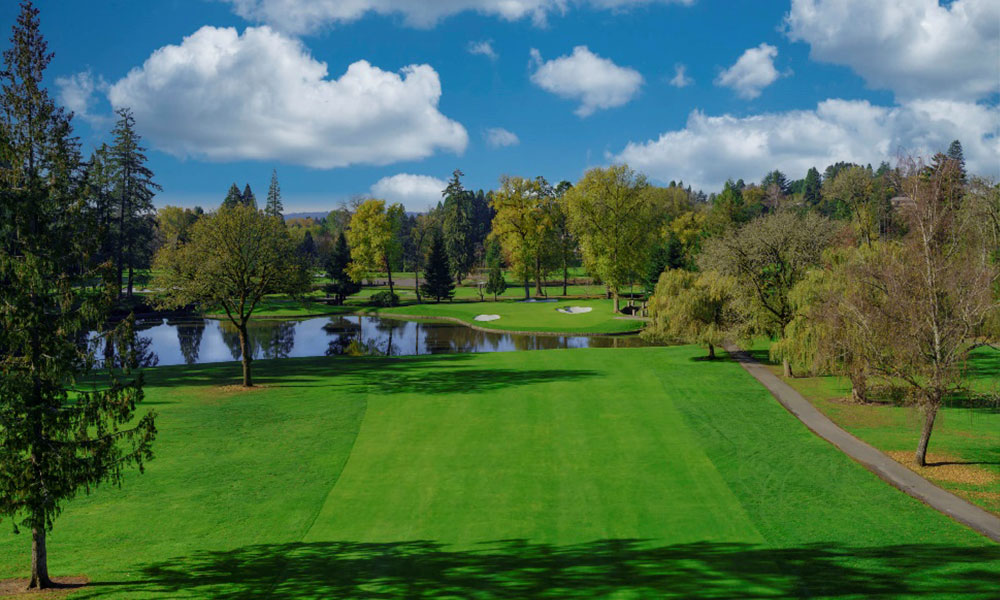 Portland Golf Club—established in 1914 and host to numerous major championships and the 1947 Ryder Cup—has completed the first phase of renovation to its historic golf course. Led by architect Dan Hixson, an Oregon native who’s lived in Portland for 35 years, the project evolved incrementally over the past decade and targeted playing areas on all 18 holes.

The project began about 10 years ago with the removal of some 75 trees throughout the course, including more than 20 around the 13th green, opening it to more sunlight and air flow. Hixson continued overseeing a tree-maintenance program while submitting a master plan for overall course improvements. Work started eight months ago and was completed this month.

“Out of respect to our rich golf history, the board wanted to preserve the integrity of our golf course, while improving it for the modern game,” said John Vranizan, President, Board of Directors, Portland Golf Club. “Our focus is to enhance the member experience, striving to be better from the moment a member sets foot on the golf course.” He noted that “working closely with Dan, the construction, and agronomy teams, we meticulously upgraded every hole on the golf course.”

The scope of work included:

The plan’s main focus was the bunkering, improving drainage while making them both more strategic and attractive. There are now 51 bunkers where there had been 63, while another 15 were repositioned to affect play (positioned in doglegs and at proper distances). Every bunker on the course has been rebuilt with Better Billy Bunker II system and filled with new, brighter sand (S900 version from Best Sand, Ohio) for contrast.

Hixson cited bunker shaper Tony Russell as having a great impact on the contouring and visual appeal of these hazards.

“There is a homogenized style with greatly enhanced aesthetic appeal due to improved drainage and sand quality. The bunker style is unique to Portland Golf Club based on capturing and retaining the best existing characteristics and topographical features,” Hixson explained.

“Facing many clubs of this era,” Hixson explained, “are the tremendous changes in green speeds. Plus, there are some very steep greens here and we didn’t want to tear into them unless it was absolutely necessary. On many, we expanded at the corners, often in conjunction with the bunker work we were doing. We’ve even gotten down on the ground and used our hands to get the new turf to lay perfectly so it looked like it’s always been there. We like to say this course was ‘hand-made.’”

Nearly a dozen holes saw tee boxes re-graded and re-grassed to make them more uniform. Plus, new forward tees were added to holes 1, 3, 5, 7, 8, 9, 10, 14, 16, and 18 to make the course enjoyable for more players, especially those with slower swing speeds. The forward tees play to approximately 4,800 yards, aligning the distance with the USGA’s Tee It Forward initiative, according to Vranizan.

While most of the changes were detailed in Hixson’s master plan, he said the club allowed him to be flexible since, as he explained, “the best designs happen in the field. This allows me to be more creative and it’s more efficient without wasting money. The club gave me a great deal of freedom, making for an awesome project. I love work of this nature and the results are showing.”

Because the course remained open during the process, members were able to follow the progress on a daily basis. Communication and coordination between Head Golf Professional Tim Hval, the Green & Grounds Committee, and Dorn was key to keeping members informed. Members were updated weekly, as well as on the club’s website, as work sequenced from section to section of the course over the project’s eight months.

“Sequencing the work the way we did revealed on a hole-by-hole basis what the future is going to look like,” Lister explained. “You could feel the buzz and excitement when holes 3, 4, 5 were completed and members saw the aesthetic changes.  For many, it’s been eye-opening. It’s like a new golf course out there.”

An irrigation infrastructure project—including the installation of all new heads—is scheduled to start in spring 2023 and take approximately six months.  Brent Harvey, an international irrigation specialist, will oversee the installation.

Portland Golf Club is in discussions to host future Oregon Golf Association and USGA championships on the renovated layout, which now stretches to 7,100 yards. “Members’ expectations are that our golf course should be tournament ready at any time,” Lister said. “When these projects are complete, I am confident that we’ll have one of the finest courses in the region.”

Located near the heart of Portland, but tucked away among Herculean fir trees, rolling greens and tightly manicured gardens, Portland Golf Club is an oasis, offering a golf and clubhouse experience unlike any other within this region. Established in 1914, Portland Golf Club is regarded as one of the most prestigious, challenging, and enjoyable member-owned golf clubs in the Pacific Northwest and continues to cultivate its place in history as a championship golf facility. The picturesque golf course and modernized clubhouse support golf and social functions that are compatible with the members’ and their families’ values and interests.