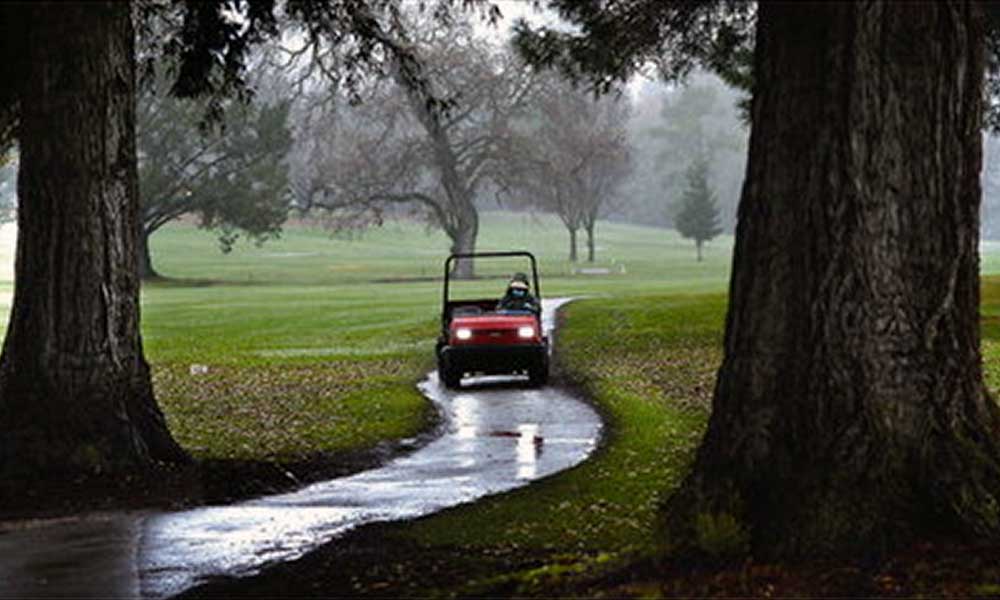 Die-hard golfers were out of luck last week when Rossmoor had to close its two courses again after they became waterlogged. “It’s soggy – totally saturated,” said Golf Course Superintendent Blake Swint, noting that there are two factors at play: Because the Dollar and Creekside golf courses are in a valley, the runoff from surrounding hills flows onto them and the clay soil there holds onto the water instead of allowing it to drain easily.

A worker drives his maintenance vehicle through the rain on the Creekside golf course last week.

After heavy, consistent showers it usually takes about 48 hours for the water to seep into the water table and across nearby walking paths into Tice Creek, and on Dec. 27 about 1/8-inch still was sitting on top of the turf, Swint said.

So, in addition to the three days that the courses were closed in late October when the season’s first big storm toppled multiple large trees, the play was suspended again in December. Golfing had been canceled for four days as of Dec. 29, not counting the usual closures on Christmas and Mondays.

Work crews had just finished removing the last of the 15-plus trees that had fallen on the golf courses since October, and now they had to turn their attention to restoring bunkers.

A steady rain had washed the sand off the slopes of these obstacles, so on Dec. 26, a handful of workers began shoveling off the layer of silt and mud that water had deposited on top of the sand, in what Swint expected would be a four-day project. After that, they used power bunker rakes to redistribute the sand to a consistent depth.

By Dec. 28, about a dozen of the bunkers still had standing water, and a handful of those needed to be pumped before crews could start rebuilding them.

But on the flip side, East Bay Municipal Utility District, which provides some of the water for Rossmoor’s golf courses, is reporting signs that the drought just might be loosening its grip on the region.

The Oakland-based agency reported that Walnut Creek had received 16.55 inches of rain for the season as of last week, as compared with an average of 7.76 inches during the same period. Contra Costa County also maintains a rain gauge in Rossmoor, which has recorded 23 inches of rain this year, as of Dec. 28, including just over 4 inches from Dec. 22 to 28.

EBMUD collects nearly all its water from the Mokelumne River watershed in the Sierra Nevada foothills, and last week reported that the area had received 28 inches of precipitation since the start of the rainy season – much more than the 16 inches that’s typical this time of year, according to EBMUD spokesperson Andrea Pook.

“We are getting some more rain this week, so that’s great,” she said.

And that desperately needed resource slowly is reversing the dropping levels among EBMUD’s seven reservoirs, including the five it operates in Alameda and Contra Costa counties.

But the succession of storms in recent weeks doesn’t mean the drought is over, she cautioned. EBMUD asked its customers to reduce their water consumption by 10% this year, a voluntary cutback that is still in effect, Pook said.

Despite a “super wet December” there’s still January, February, and March rainfall totals to consider, she said. EBMUD is not even halfway through the season, Pook added, noting that the so-called “water year” officially started Oct. 1.

The agency normally records about 48 inches of rain during the season, so with 28 inches logged so far, the region still needs more, she said.

EBMUD’s board of directors will revisit reservoir levels in the spring as well as how much water customers are using before determining whether there’s still a drought.

“We’ll know a lot more in the next few months,” Pook said.

The wild swing in precipitation levels since the beginning of the year has boosted Swint’s hopes for a wetter 2022.

He only had to listen to the flow of Tice Creek this spring to know that Rossmoor’s primary water source was in “really, really bad shape,” a situation that forced Rossmoor to start buying additional supplies from EBMUD earlier than usual.

Normally, it opens the valves to the agency’s reserves in mid-May; this year Rossmoor took the very rare step of making its first purchase in March, Swint said.

All told, GRF bought slightly more than 38 million gallons of water before the October rains arrived as compared with 24.3 million during the same period in 2020.

But now Swint’s optimistic. “I don’t expect there to be any mandated restrictions (by EBMUD) next year,” he said, adding, “I don’t think we’re in as much long-term drought danger as other people do.”