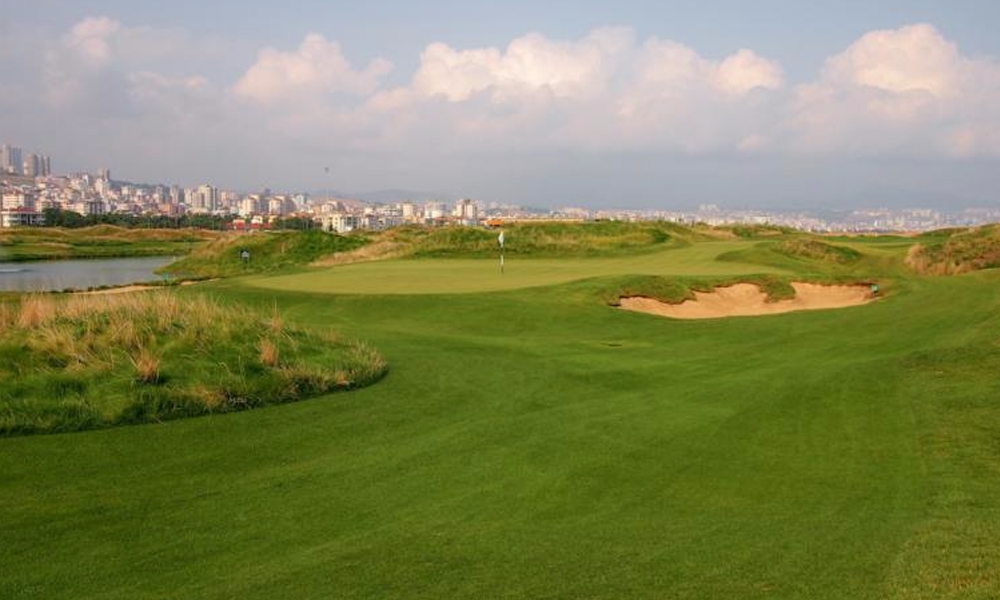 The course architects at Golfplan have announced grand opening dates for a pair of Black Sea projects: the first municipal course ever undertaken in Turkey, and a hilltop 9 now taking shape high above the Georgian capital of Tbilisi.

“Our firm has opened up a great many new golf destinations but few stack up with the Black Sea in terms of pure eye candy — it has proved a stunning golf setting,” said Golfplan partner Kevin Ramsey, who is directing both projects. “While Tbilisi is up and coming as a tourist destination, Samsun is just starting this push and Samsun Golf Club is already a significant asset.”

Santa Rosa, California-based Golfplan (www.golfplan.com) actually finished the first nine at Samsun in 2016. The back nine is newly completed and will emerge in fully finished form come the spring of 2018.

Just 500 miles to the east, in the former Soviet Republic of Georgia, the 9-hole Tabori Hill project has entered the final shaping phase. With grassing set for the spring, it is scheduled to open late in 2018.

The most important aspect of these projects, according to Ramsey, is the fact they’re both open to the public. “If there’s one thing we’ve learned,” he said, “in the dozens of emerging golf nations where we’ve worked over the course of decades, it’s this: It’s not enough to merely design and build golf courses. We’re obliged to build native golfing populations, as well, and that requires public golf.”

Few course architecture firms have played so central a role in introducing golf to a broader, global audience. Formed in 1972, Golfplan has created more than 217 original designs in 32 different countries (if renovations and master planning are considered, 85 countries). This sort of sustained, diverse productivity is one reason GolfInc magazine named Kevin Ramsey and his partner David Dale among the “Top 10 Most Powerful People in Asian Golf” for 2016.

“I don’t want to be coy: Dave Dale and I do all sorts of private golf club design,” said Ramsey, noting the U.S. PGA Tour will soon visit one of them, The Club at Nine Bridges in South Korea, for the inaugural CJ Cup (Oct. 19-22). Nine Bridges was just ranked #41 in the world, according to GOLF Magazine, and it’s very private indeed. But Golfplan designed the country’s first public course, in 1988 (Lakewood) and is now busy developing a multi-course, public/resort facility in the southern peninsula.

Ramsey cited another example: Anvaya Cove Golf & Sports Club in The Philippines, named the Best New Course in Asia for 2014. “Anvaya is a very private club, as well,” Ramsey said, “but we worked with the owners there to develop the first truly public course in Manila, a place called SouthLinks that opened in 2015, and is mobbed 7 days a week, 365 days a year. That’s the exercise in Turkey, at Samsun, and Georgia, at Tabori Hill– and I could cite a half dozen other countries where we’ve seen this strategy truly build native playing populations. Not coincidentally, the developers at SouthLinks have realized a massive return on their investment.”

Turkey is home to nearly 20 golf courses today, most of them resort tracks clustered on the southwestern, Mediterranean coast (Golfplan has another project underway there, in Bodrum). In Samsun, on the north/central coast, Ramsey embraced the municipal model on 135 acres of land reclaimed from the adjacent Black Sea. The first nine proved so successful, the city of Sansum commissioned Golfplan for another, creating a 6,800-yard 18-hole links-style course that will formally debut in summer of 2018. Total price tag: US$8 million.

“This has challenged us, as designers, because now we have some of the best young golfers in Turkey playing this course — but this remains an emerging golf market,” Ramsey said. “We’ve worked through this, and I should give some credit here to one of our shapers, Adam Kelland, who works out of George, South Africa. He has a lot of links experience. This is all reclaimed land that we were able to sculpt into just the landforms we wanted. Adam did a great job of implementing the evolving plans while adding that aspect of links quirkiness I was looking for.

“We even have a short, semi-blind, bunkerless par-3 hole based on The Dell, at Lahinch.”

Down the road (and 700 meters/2,100 feet higher), Ramsey followed a more traditional design and development model at Tabori Hill, developed by the Georgia Investment Fund. The course, measuring some 3,400 yards, ranges over some truly dramatic terrain atop a ridge that overlooks the capital. The master plan for Tabori Hills includes a 200-room hotel, driving range and golf academy.

“Here again, it’s about creating a facility that will help teach the people of Georgia how to play the game, in addition to being a resource for tourism. That said, I can honestly say I’ve not seen a golf setting anything like this one, anywhere. The views from the course down to the city are remarkable — something we were sure to accentuate when we routed holes like 1, 2, 8 and 9. But get this: Golfers will literally access the resort from the middle of downtown Tbilisi, by cable car. An Austrian company is building that system as we speak.”

“We have to be very careful on what is a sensitive site,” he explained. “It’s rocky up there, with lots of dwarf pines. Only 90,000 cubic meters of dirt will be moved, a small number even for 9 holes. We’re clearing as few trees as possible, to avoid unnecessary erosion, and we have to get the grading just right. At the same time, this approach has resulted in a course that sits beautifully on the site and really ties into the natural setting.”