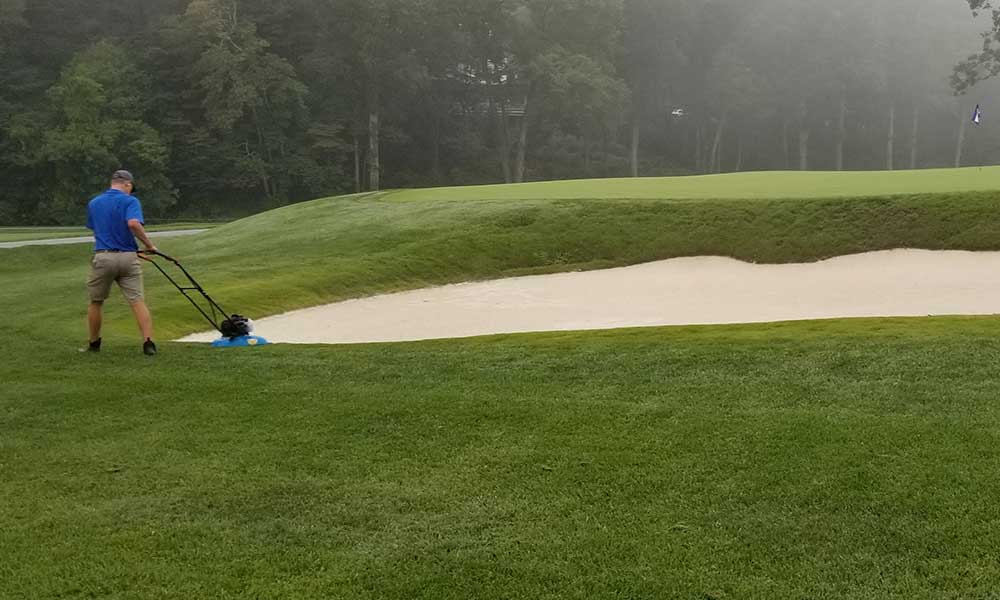 According to Todd Jenkins, former golf professional and PGA member and now vice president of Better Billy Bunker, along with bunkers come special concerns and obstacles. These problems have been addressed in many different ways over the years.

Originally, bunkers were pretty straightforward. The basic system was to dig a hole and fill it with sand. While soil bases had better luck with natural drainage to some extent, clay and harder pan bases had drainage problems, which lead to contamination and erosion. Some courses still utilize this basic method if the conditions permit, due to the cost-effective nature of the operation.

An alternate method is the “impervious base” method, which utilizes a hard, drainage-free bottom (like concrete). This does help with contamination of the sand, but the obvious problem was drainage. The impervious nature of the base prevents any drainage at all, which caused them to fill up like swimming pools. This causes erosion problems as well as the obvious issues with your sand hazards turning into water hazards following a rain.

“Good bunkers are all about drainage, regardless of the method you use,” Jenkins said.

This brings us to the original Billy Bunker.

In the 1980s, golf course superintendent and course architect Billy Fuller came up with a method of bunker construction to prevent erosion and contamination that is still very common today. Simply put, the Billy Bunker method places drain lines under pea gravel under the sand. A geotextile liner is used to separate the gravel from the sand. The method worked extremely well and was soon known throughout the industry as the Billy Bunker.

“The liner is the issue,” Jenkins said. “Over time, the liner becomes torn and exposed, eventually becoming compromised.

“People mistakenly began thinking the liner was the key. In reality, the layer of gravel is the key. That’s the conduit to get the water to the drain line. If you don’t have proper drainage, that sand will erode and become contaminated. The liner in the original Billy Bunker was just to separate the sand and the gravel,” said Jenkins.

“We have developed a way to keep all the benefits of the original bunker, but doing away with the one weak point, which is the geotextile liner,” Jenkins said.

“We go in with a polymer spray, which essentially binds or glues that gravel layer together. You don’t lose any porosity. It drains at over 350 inches per hour. With that gravel being bound together, there is no need for the geotextile layer.”

So that’s it? Glue the gravel together?

“Not exactly. The specialized polymer and application method is essential,” Jenkins said. “But it’s not rocket science. Poor drainage is a budget killer. Proper drainage is a huge saving in maintenance and labor. It’s one of our main selling points: it saves time and money for golf coursesuperintendents.

“Good bunkers shouldn’t be limited to the most exclusive, upper echelon golf courses. Everyone should have access to good bunkers,” said Jenkins. “The Better Billy Bunker method is the best draining, the most durable, the longest lasting and the most cost effective.”

It’s also very new to the market. Debuting at the Golf Industry Show in February, Jenkins said they are working on getting the word out to the rest of the industry. At about the same cost as the original Billy Bunker method, Jenkins says the Better Billy Bunker method is already making waves.

“It really sells itself. Pick the worst bunker on your course and let us install our method. The proof is in the pudding. We encourage trials. Other methods might work as well, but none will be more cost-effective,” said Jenkins.

“All we can ask is that the greens committees or golf course superintendents do proper research,” said Jenkins. “Golf Course Superintendents are spending entirely too much time shoveling sand in bad bunkers. They need to invest in something that’s not only going to create better bunkers but be maintenance-saving over time. That’s what makes it worthwhile. Our motto is ‘We won’t have one bunker fail.’”

But don’t think it’s as simple as gluing rocks together. Better Billy Bunker has specialized licensed installers making sure that the work is done right. Better Billy Bunker will not ship to a golf course superintendent to install themselves.
“The method by which it is applied is important to the process,” said Jenkins.

“Don’t do it a certain way just because it’s always been done that way. Our ultimate goal is to make golf courses better. We want to make golf course superintendents’ life easier and provide good bunkers for golfers,” Jenkins said.

“I love the game of golf, and it’s a treat to be involved in something that can revolutionize the game.”

Key to our success
Renovate entire golf holes, not just features
To Top