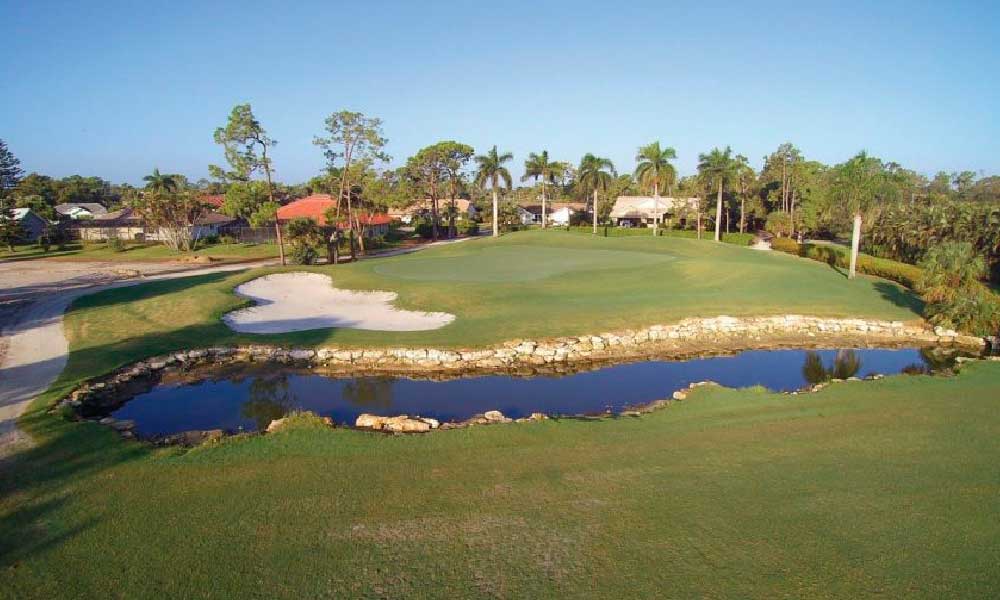 “It’s like a dream come true,” said Rick Neet, Royal Palm director of golf, referring to the new renovation of the golf course. “All the years of planning, golf committee meetings, member votes, and finally the decision to move ahead with the project have all come to fruition. It is going to be a great golf course.”

Mr. Neet should know a little about Royal Palm. He received his PGA Class A designation in 1980 and assumed the role of a head pro at Royal Palm Country Club in 1981. He has been at the helm ever since. You could say that this 188-acre tract of land in East Naples is his baby.

The dream began back in 1972 when Cornelius Van der Lely purchased over 25,000 acres bounded by Rattlesnake Hammock Road, U.S. 41 (Tamiami Trail East) and Route 951 (Collier Boulevard). The first golf course to be built on this tract of land was Hibiscus. Soon after, the second golf course was undertaken under the guise of heralded golf course architect David Wallace. The second course was named Lely Royal Palm Country Club and the first nine holes were finished in 1974. The site of those holes will now be the front nine at the new Royal Palm Golf Club. During the next two years from 1974-1975, the remaining nine holes were completed and opened on Dec. 31, 1975.

Royal Palm Country Club was redesigned in 2000 by Gordon Lewis. And although the golf course has been through many changes over its 40+ years history, it is still one of the premier golfing venues in Southwest Florida.

After almost 20 years since the last major renovation at Royal Palm, it was time for not only a new redesign but also for a new name that better described the amenities and purpose of the club. With just a subtle change to Royal Palm Golf Club, a re-branding effort began in conjunction with the newest redesign by Ron Garl.

“It was time to position our club for what it is, a golf club,” said Jeff Calhoun, board member, and membership committee chairperson. Along with the help of a new re-branding committee made up of members with years of expertise in marketing and graphic design, the new name and look are being implemented during the shutdown. The new-look will be visible in all advertising and marketing campaigns for the club along with totally new golf course amenities, signage, clubhouse decor and much more. It is another step toward becoming a premier golf club.

Finally, the current redesign is coming to a close. On Sept. 20, the last holes were grassed.

“This is obviously one of the major steps of the project then we can check off,” said John Gittings, president of the board of directors.

“We now have a full 2.5 months for the last holes to grow in and mature,” said Mr. McGourty. “We couldn’t be more pleased with the progress that has been accomplished in such a short period of time.”

“It seems like the project has been going on forever, when in fact we didn’t start killing the grass on the old course until the end of the season,” said Mr. Gittings. “It is hard to believe the number of man-hours that have been put in and the amount of dirt that has been moved in such a short span of time.”

The redesign of the golf course is exquisite. There are a number of holes where rock walls have been constructed to enhance existing water features. All the bunkers have been rebuilt. All the fairways and rough have been re-grassed and all the greens have been redesigned. Some new mounding has been introduced to enhance the visual aspect of the golf course and to give the golfers a better feeling of privacy. New irrigation systems are in place along with new drainage pipes in many areas. “None of this would have been possible without our golf course superintendent, Mike Sankey,” noted Glenn Price. “This man is nothing less than a magician.”

Mr. Sankey has been involved in the project since the beginning. Traveling with board members to various golf courses to view different architectural features and visiting the sod farms in Arcadia to pick out the grasses to be used. The new golf course tees, fairways and roughs will be grassed with Bimini and Mr. Sankey decided to stay with TifEagle for the greens. Royal Palm has always been known for the conditioning and consistency of their greens, so Mr. Sankey thought there was no need to change that.

According to Jennifer Sun, membership and marketing director, there are only a few membership opportunities still available. The renovation is generating a lot of interest in the club along with its convenient location between downtown Naples and Marco Island. She expects there to be a waiting list very soon after the club reopens.

The clubhouse will reopen for its members on Monday, Nov. 4,w and the renovated golf course along with the new and improved practice facilities is slated to open Dec. 1. Royal Palm Golf Club will offer members and guests the opportunity to experience what is destined to be one of the most talked-about golf courses in Southwest Florida.

“If you are looking for something new, we have a new course, a new name, and a new logo,” said Mr. Gittings.

Tedesco – The Sinking of a Ship, The Birth of a Club
Belvedere Golf Club welcomes new golf course superintendent Jordan Caplan
To Top