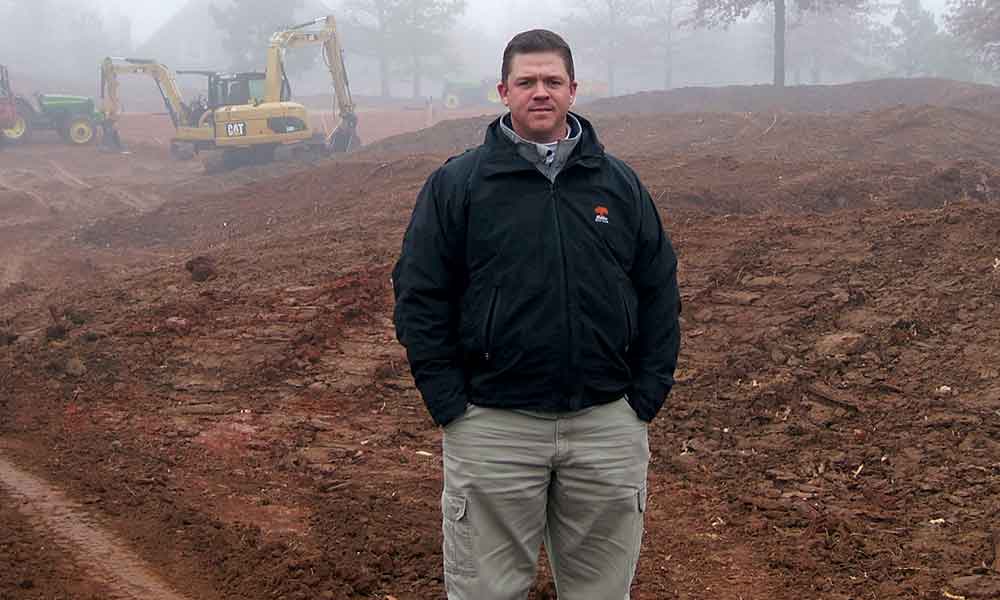 Looking back to my last semester at Oklahoma State University, I remember thinking about everything I wanted to accomplish in my career. Being a Superintendent at a “Top-100 Course” and hosting a major were among the top of the list. There were a lot of things I wanted to experience as an assistant and as a Superintendent before I went after a big job.

I had my first job as an assistant lined up two months before I graduated. Before I knew it, I was leaving Stillwater for Little Rock, Arkansas. I spent less than a year at Pleasant Valley Country Club before I found an open position that would return me to Oklahoma at Cedar Ridge Country Club.

As an assistant at Cedar Ridge Country Club in Broken Arrow, I was fortunate to have worked under Mike Wooten. Mike is a stickler for every single detail of the golf course. I give credit to him for instilling those ways into me. What he taught me made me the Superintendent I am today.

There was constantly a project going on the 2 ½ years I was at Cedar Ridge, whether it was landscaping, rebuilding tees or bunkers, drainage and irrigation add-on, or the fairway renovation. I thoroughly enjoyed the construction part of my job and always looked forward to the next project.

I left Cedar Ridge for my first Superintendent job at Clary Fields Golf Club, a public course just outside Tulsa, Oklahoma. This was a great learning experience for me because I had to be creative with the $270,000 operation budget to achieve the results I wanted. I learned a lot about myself during this time and was thankful for this encounter.

I would later become friends with golf course architect Tripp Davis. Tripp had designed Clary Fields and would visit the golf course when in the area. After I had been at Clary Fields for two years, Tripp recommended me for the Superintendent vacancy at Belmar Golf Club in Norman, Oklahoma.

Tripp had also been the golf course architect at Belmar, which had recently been purchased by country music singer Toby Keith and football coach Barry Switzer. I was excited about the opportunity because they were looking to make a number of golf course improvements. This experience was similar to my term at Cedar Ridge, except we had multiple projects going on at the same time for the entirety of my 3 Ã‚Â½ years there. There was never a dull moment to say the least.

In March of 2008, a friend of mine, Kirt Phillips, who was the Superintendent at Oak Tree Golf Club, informed me that he had accepted the Superintendent position at Dallas Country Club. Until this point I had not thought of leaving my current position, but I didn’t have to think twice about this. Here was a chance to reach another milestone and I was hopeful that I would be rewarded for everything I have done in my career to this point.

When I accepted the Superintendent position here at Oak Tree Golf Club in early April of 2008, I had no idea of the events that were about to unfold. I was grateful to have accomplished another aspiration in my career to be Superintendent at a “Top-100 Course” and have the possibility to host an event in the future. Oak Tree Golf Club had been the host of the 1984 U. S. Amateur, 1988 PGA Championship, 2000 PGA Club Pro Championship, and the 2006 Sr. PGA Championship. However, after being on the job for only ten days, the club had sold. I believe the majority of you reading this right now know the multitude of stress associated with transitioning to a new job. This transaction gave those stresses a twist. I’ve heard too many stories of scenarios like this going badly and was hoping this wouldn’t be one of them.

After meeting the new owners, I immediately learned of the upcoming plans for the club, and they were interested in hosting another championship. I knew I had a lot to prove and respect to earn now that I had a greens committee that consisted of two owners and two of the seven touring pros.

The new ownership group was very sincere about taking Oak Tree back to what it was intended and used to be. This meant renovation. I had been a part of many projects and small renovations, but this one was going to be special.

When Pete Dye was brought in the mid 1970s to design Oak Tree Golf Club, his governing influence was to make it the hardest golf course in the world. He was successful. In fact, Golf Digest currently ranks Oak Tree Golf Club #19 in the “Americas 50 Toughest Courses”.

When I left Belmar, I was at the tail end of building a 20-acre practice facility and scheduling the construction of a new maintenance facility. When I started at Oak Tree, there were no projects on the board so I was looking forward to maintaining for a while. It did not take long for those feelings to change once I received the news.

We had about two months to select the contractors, determine the scope of work, nail down our time lines and select the date to close the golf course. I’m not one to spend much time talking on the phone, but over the next couple of months I felt as if my BlackBerry was glued to my ear.

It was important that we brought in a construction contractor that was reputable in renovations and had previous experience with Pete Dye’s work. It was also just as important to find an irrigation contractor that could accommodate to our plans. EC Design was selected to design our irrigation system. Bob Pinson with Course Crafters signed on shortly thereafter to do the renovation and John Leibold of Leibold Irrigation for the installation of the irrigation system and pump house. All of these gentlemen, along with their associates, were instrumental in helping me coordinate this project in such a short period of time, many meetings and tours of the golf course, the scope of work was settled. It had been decided to make adjustments to nine of the eighteen greens, rebuild the tee complexes and bunkers, replace the common bermuda fairways, build a creek through one of the holes, remove all of the railroad ties that were used for retaining walls and curbs, and re-establish the native grass areas throughout the golf course.

Both contractors had arrived and we were underway. Our plan was to have the mainline installed and greens work completed before Christmas. Even with the few changes in plans, we were able to accomplish both. The weather has been great for construction and we have been fortunate to have only lost a handful of days due to rain.

The changes we were looking for in the greens did not require them to be completely rebuilt. The section of green that required the change would be cored out and the necessary changes were made in the sub-grade. Once the changes were complete, new materials were added and that portion of the green would receive sod from the next green with changes.

The back-nine green complexes have undergone extensive changes to mirror what exists on the front nine. What used to help a shot retain or kick onto the green is no longer there. Before, you would look forward to the back nine because you had a chance to make up a couple of shots that were lost on the front nine. That is not possible anymore. The back nine will play just as hard as the front.

In wrapping up this article, the contractors went home for Christmas, and have picked up right where they left off right after New Years. I am looking forward to 2009 and I am sure it will be eventful!

Thanks to my assistants, Diego Chavarria, Bobby Alsup, and Cameron Stafford for their dedication and hard work. Also, I would like to thank my equipment technician, Sergio Montelongo, and the rest of my staff for their hard work. My wife Kelsey deserves a lot of thanks for supporting my career decisions. I would also like to thank Golf Course Trades for this opportunity.

The Process of Improvement
Essex County Club: Host site of the 2010 Curtis Cup
To Top