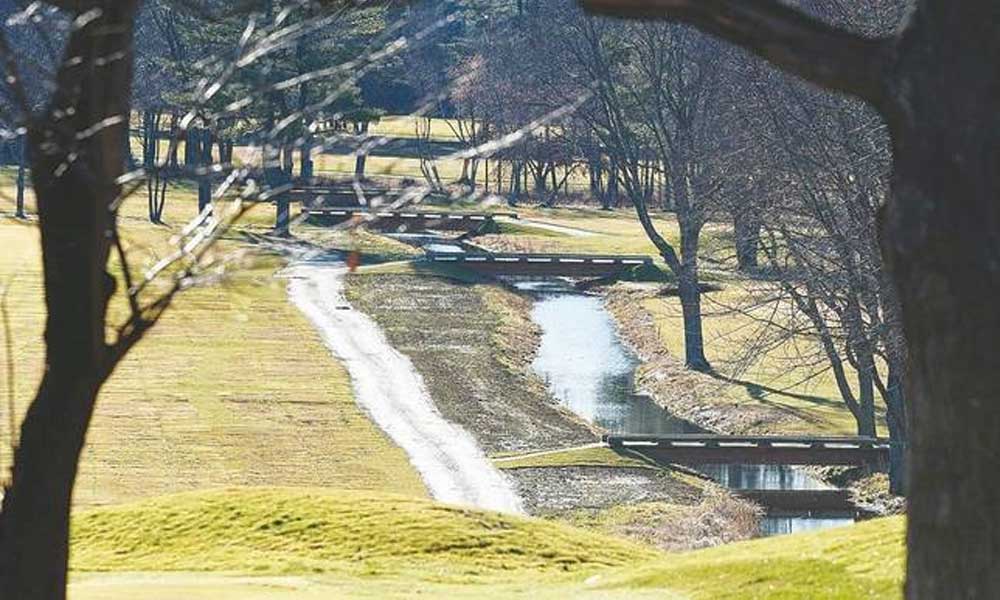 December 22, 2015 – After two days of rain, a good portion of the municipally owned Derryfield golf course would ordinarily be under water.

But last Wednesday, under clear blue skies, club pro Mike Ryan took a golf cart around the 18-hole course and found nothing but dry greens and fairways in the bright sun of an unseasonably warm December day.

The recently completed $3.4 million renovation of the course passed the test of whether the drainage problems have been solved, but the real challenge lies ahead: Will the remodeling be sufficient to attract new members and put the club back on the road to success after years of declining membership and deficits?

For Ryan and others involved in the three-year effort, this spring will mark a new beginning for Derryfield, one of only three municipally owned country clubs in the state. “Let’s hope so,” he said. “That’s what we’re going for.”

The condition of the course had deteriorated to the point where its long-term viability was suspect, leaving the city with little choice but to invest in or essentially abandon an asset that had been on the books since the 1930s.

The mayor and Board of Aldermen decided to invest. In 2012, they approved a $250,000 engineering study to size up the options, and in 2014 floated a bond for nearly $3 million to get the job done.

Work began in the spring and was finished just before Thanksgiving. City officials hope the improvements will eventually enable the golf course to pay back the bond, erase its accumulated deficits and begin to operate in the black over the next several years.

As part of the city’s “enterprise operations,” the golf course is supposed to make enough money to cover its expenses and was able to do so until 2007, when the new restaurant building and function hall opened and added new debt service. Since 2008, the country club has run annual deficits as high as $226,000 in 2009 and as low as $90,000 in 2013.

While costs were increasing the membership was decreasing, from a high of nearly 1,000 in 1998 to fewer than 500 today. In recent years, it was not uncommon for the course to close nine of its 18 holes due to drainage problems for an average of 52 days each season, which consists of roughly 210 days from April 1 to Oct. 30.

The decline in membership was accelerated this year, when the course was restricted to nine holes for the entire season to allow for the restoration work. (Those same nine holes are still open for play. The course will be closed on Christmas Day, but Ryan says play will continue as long as the weather allows. )

Members will see a 20 percent increase across the board from 2014, the last year the country club operated an 18-hole course. That will put the cost of a family membership at $2,048, while a single senior citizen would pay $740 – quite affordable by country-club standards.

In addition to attracting new members, the improvements should open up other money-making opportunities, like tournament hosting. “Even the Manchester Chamber of Commerce doesn’t play their tournament here,” said Peter Capano, project supervisor for McFarland Johnson, the engineering firm that conducted the initial engineering study.

Capano retired from city employment as chief of parks and recreation and went to work for McFarland just in time to supervise the renovations on behalf of the engineering firm.

The work includes more than $1 million worth of new drainage and irrigation systems, paved golf cart paths, and seven new bridges along with redesigned greens and fairways. Tees have been added or enlarged, several large trees were removed to eliminate shading problems and vegetation was planted to prevent erosion.

The investment in the new building and the golf course renovation should pay off in the years ahead, according to Don Pinard, chief of parks and recreation.

“Things are turning around,” he said, “and solving this drainage problem is going to be huge. We have memberships that are already sold for next year, and people haven’t even started to come out and kick the tires.”