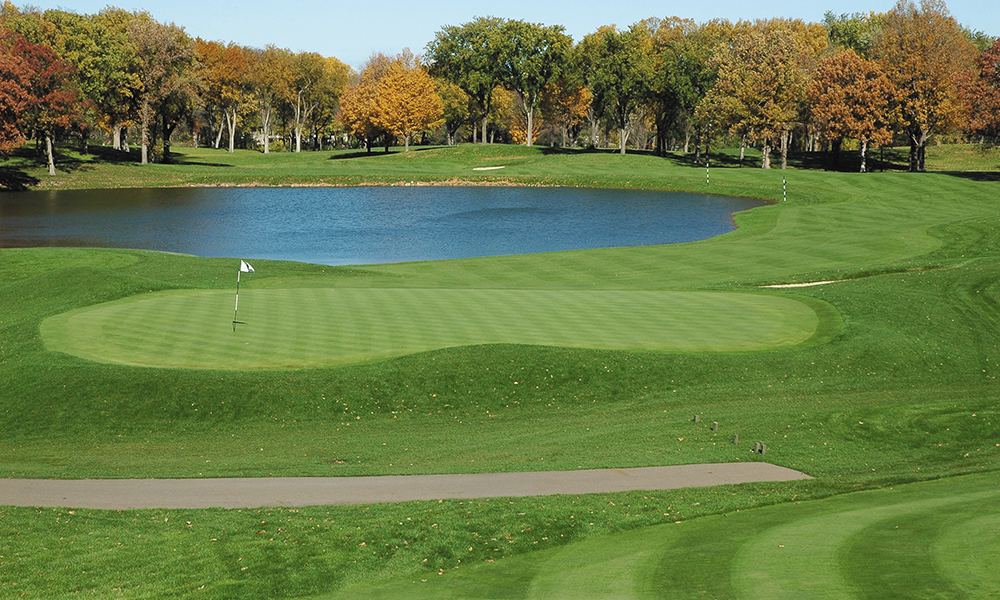 In 1909, a group of Minnesota businessmen and golfers chipped in a thousand dollars apiece to buy one option each on sixty-six acres of farmland, southwest of Minneapolis. Over the next two years, the acreage, described by the Minneapolis Morning Tribune as “a veritable land of heart’s desire,” would be shaped and sculpted by Scottish golf professional and architect Willie Watson into the eighteen-hole course at Interlachen Country Club.

Over the years, reshaped by time and use, the course at Interlachen evolved. As it changed, the imprint of Donald Ross’ touch began to fade. Aspects of his signature design style slipped quietly away.

Recognizing the changes, the decision was made at Interlachen prior to hosting the 2008 U.S. Women’s Open, to undertake a bunker renovation project. Course management turned to Brian Silva, an architect respected for his own design as well as his skill in restoring the nuances of a Donald Ross course while maintaining playability for the modern game.

Silva’s father worked in golf course construction for numerous architects. As he shaped golf courses, he also may have shaped his son’s future.

Starting as a greenkeeper at Woodland Country Club (Newton, MA) while still in high school, Silva then enrolled in UMass Amherst and earned an associate degree in Turf Management from the Stockbridge School of Agriculture, a bachelor’s degree in Landscape Architecture and a master’s degree in Plant and Soil Sciences. In addition to teaching turf management courses, he worked for a short time as a USGA Green Section agronomist. In 1983, he joined Geoffrey Cornish, renowned architect and golf historian, before later launching his own firm.

Lowkey and unpretentious by nature, Silva has generously shared the following insights about his work at Interlachen Country Club.

“At first, the major interest in the project revolved around improving the playing conditions of the bunkers. Over time, the floors of many bunkers had become v-shaped to such an extent that it was difficult to get a club on the ball that had come to rest in the bottom of the “V”.

For a number of years, though, I had been trying to interest the course in renovating their bunkers for another reason, this being so that the bunkers appeared more in keeping with bunkers typical to their vintage in the history of golf course design in America.

In the first two or three decades of the 20th Century, the greats of the Golden Era of course design had detailed their bunkers in a fashion many find unique today. This is especially true of their fairway bunkers. Plan after plan showed that architects like Donald Ross presented a majority of their fairway bunkers perpendicular to the line of play on a hole. Set up in this manner, these bunkers were wider from side to side and fairly narrow from the tee to green ‘sides’ of the bunkers.

When the Interlachen bunkers had last been renovated in the late 1980s, the vast majority of the fairway bunkers had been detailed in the more contemporary fashion, with the bunkers longer from tee to green and parallel to the line of play on a golf hole. This made the fairway bunkers far more playable than those set up perpendicular to the line of play but certainly less authentic in terms of Interlachen’s design history. The decision was made to renovate the bunkers in a fashion more in keeping with the club’s Ross design.

Interestingly enough, a good percentage of the fairway bunkers could be salvaged merely by twisting their axis 90 degrees such that the bunkers changed from parallel to the line of play to perpendicular to the line of play. The impact on the course’s aesthetics and strategy were dramatic.

The bunkers now looked as though they were fully integrated into the layout as fairways shifted this way and that as they approached a bunker, moved to the play side of the bunker and then shifted back to create a landing area past the bunker. The risk and reward strategy of the Ross design was brought back to the forefront. Players had to think their way through a round. Without question, the fairway bunkers set up perpendicular to the line of play exacted a greater penalty to an errant shot but there was always fairway short, long and to the ‘inside’ of the bunker for folks to make their way from the tee to the green.”

During a practice round press conference before the 2008 U.S. Women’s Open, the USGA’s Mike Davis summarized the renovation work saying, “At Interlachen, you are looking at a Donald Ross golf course. They did fairly extensive restoration work a few years ago by Brian Silva and we happen to think they absolutely hit a home run with it. The bunkers look very much Donald Ross. Greens were taken out to their original sizes and shapes. And the project also took a look at a number of teeing grounds to bring a few drive zones back into play. It’s a marvelous test – it’s an old style.”

Recommended reading: From Fields to Fairways: Classic Golf Clubs of Minnesota. This insightful book, published in 2012 by the University of Minnesota Press, by author Rick Shefchik, devotes a full chapter to the intriguing history of Interlachen Country Club.

Intestines of the Earth: Earthworm Management Update
Making the Rounds Part 2
To Top