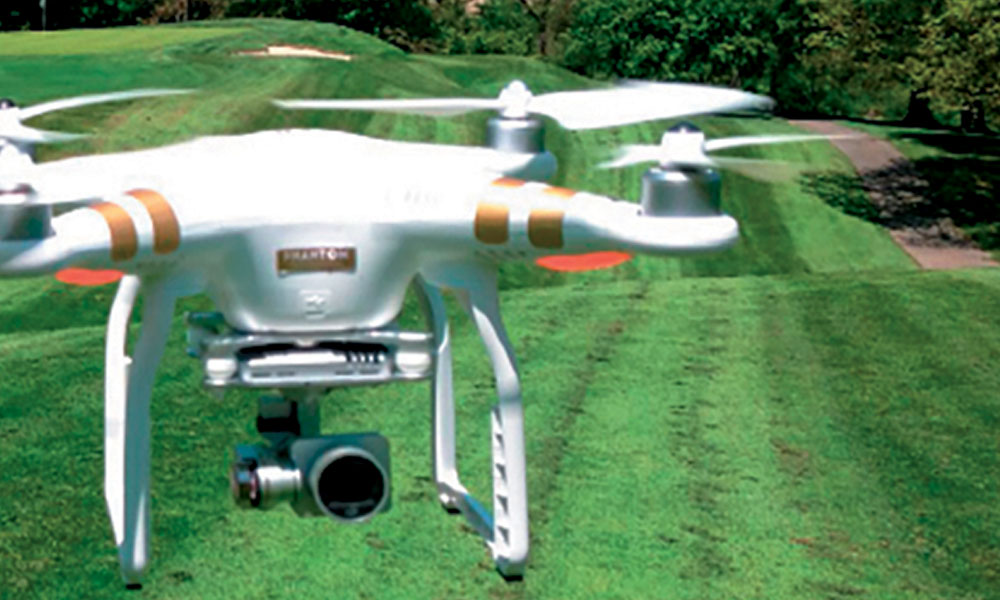 It was one of those eye-opening moments. In fall 2014, Lester George, ASGCA, was working at Vestavia Country Club in Birmingham, Alabama, when one of his subcontractors reached into his van and took out a drone. “I’m like ‘he’s not going to launch that thing is he?’” recalls George. “But he did, and flew it up to about 400 feet to show us what it could do. After I had got over how cool it was, I realized how useful it would be to see the golf course from whatever perspective I wanted.”

Vestavia has a lot of rock on the property, and footage from a camera attached to the drone showed the grass as a lighter color where the rock was closer to the surface. “I could see it from the ground as well, but not in its totality,” explains George. “It showed me where I was going to have to either expose the rock, or cover it to give grass the right conditions to grow in. “It was almost an immediate ‘a-ha’ moment for me, I went out and bought one right away.”

Throughout the history of golf, new innovations have affected both the way we play the game, and the way golf courses are designed. The topic of innovation was discussed extensively at this year’s annual meeting of the American Society of Golf Course Architects.

Over recent years, the unmanned aircraft system (UAS, or ‘drone’), has emerged as a technology with numerous commercial applications. Originally more commonly associated with military operations, when Amazon revealed it was testing drones for parcel delivery, it raised the profile of the technology’s possibilities for widespread commercial use. Indeed, Japanese firm Rakuten has even applied the parcel delivery concept to golf and is now testing a new service that allows items such as snacks and balls to be delivered from the clubhouse to golfers out on the course.

Jim Cervone, ASGCA, was also quick to see the potential benefits of using drones in golf design. “It dawned on me that this would be a wonderful addition to the toolbox,” he explains. “When you get that drone out for the first time, you’re like a kid. You just want to fly it around and have some fun. But that’s actually an important aspect of it because you need to be familiar with it and be able to maneuver it properly,” says Cervone.

Ease-of-use means architects can get to grips with drone technology relatively quickly. Another golf course architect and drone operator, Mike Benkusky, ASGCA, honed his skills using a basic model, the type that has become popular as a kids’ toy in recent years. “I was advised before going out and buying an expensive one to go and buy one for under $100 to learn how to fly it. If you can fly a little one, you’ll find the bigger ones a lot easier.”

The surge in popularity of drones has seen all kinds of possibilities emerge, and increasing demand on airspace. In the United States, there are safety guidelines for drone use for hobby and recreational purposes, including flying below 400 feet, keeping the aircraft within visual line of sight at all times, and not to fly near people. But if the drone is being flown for commercial use, you must have authorization from the Federal Aviation Authority. This can be achieved through a Section 333 Exemption for operations in low-risk, controlled environments, or a Special Airworthiness Certificate.

Once authorization has been granted and the art of piloting a drone mastered, there are countless applications, limited only by the operators’ imagination. Like George, Benkusky has found that the immediate benefit relates to getting that aerial perspective of a course that would have previously only been available with expensive helicopter footage.

“If a club is considering removing trees, you can show them exactly the effect that shade has on the green,” says Benkusky. “Or with another project we used drone photography to show the full extent of bunkering around a green, and consider how we could remove sand without affecting the design integrity of the hole.” “I can look at drainage,” says George, “I can look at shade patterns, conditions where the turf is suffering for one reason or another, by getting that bird’s eye view.” (To view drone videos of Vestavia CC taken by Chad Cosby of Chandler Landscapes, Inc., visit: www.youtube.com/watch?v=t11utX9hNvs.)

One of the most obvious early applications has been to improve visualizations of design proposals. Visualization using photos or artwork is a common technique employed by golf course architects to help get their design ideas across to clients. “If you start explaining ideas with just a plan, clients don’t necessarily get the idea of, for example, how deep a bunker is in relation to a green,” says Benkusky. “I think video takes it a step further where you can show the entire golf hole pretty easily and even put it out on YouTube so the club can share it with their entire membership. It’s a selling point, showing people what is going to happen and getting them excited about the project.”

Benkusky had seen some impressive animation work for another project and wondered if he could emulate it with video for a project he was working on at St Charles Country Club in St Charles, Illinois. “I decided to experiment with a couple of holes last fall,” he explains. “I was just playing around with it, but it ended up looking great.” Benkusky took drone video footage and then overlaid it with proposed alterations and annotation (see sidebar). “You do some stop-frame work, exporting a snapshot image out to Photoshop for manipulation, insert in back in and add in some transitioning,” he explains. “I sent it over to the superintendent and he shared it with the club, they said ‘how about we do all eighteen holes!”

George agrees. “Clients love presentation video—whether it’s architectural or the club just wants flyovers to be on their website.

“But we’re just at the tip of the iceberg. One of the main applications is getting information faster,” he adds. “In a similar way to when CAD was introduced and we could make changes to designs in minutes rather than hours, drones have the capability to gather information in hours rather than weeks.”

Specifically, by using a drone in combination with photogrammetry software, architects can get accurate and detailed topographical information for a site in a fraction of the time it would take to do a traditional land survey. Vestavia recently conducted an entire survey of the property. “They went out with a drone and programmed it to fly back and forth,” says George. “It went up for 45 minutes, came down and they replaced the battery and flew it again. It’s as good a topo as I’ve ever had and it took them two hours instead of two weeks.”

“To be able to go out with the drone and within minutes set up a small flight plan and get the sort of base material I need is invaluable,” says Cervone. “It’s an expensive proposition to get someone out to do topo for you—and not to mention you are then on their time. I can go out on my own and turn something around in the same day.”

A number of software applications are available for download to a smartphone or tablet, which connect with the drone and enable the user to set up an automated flight plan and capture the images required to produce a topographic map.

“Once you get the hang of setting up a flight plan, which is simple to do, you hit a button, that drone will take off, fly what you set up on that app, come back and land at your feet,” says Cervone. “The aerial images are taken by the camera and stitched together into an overall larger aerial, and through photogrammetry, the software that I’m using creates the topographic information.”

The accuracy is impressive too, according to Cervone.

“Typical grading plans may provide two-foot contour lines and you interpolate everything between it. When I’m designing a golf green I am usually proposing six-inch contours. With a drone I can get a one-inch contour map. For projects where we are rebuilding greens, in many cases they want to restore the greenback to its original condition. For example, this summer I will be rebuilding the putting surfaces at Sewickley Heights Golf Club in Sewickley, Pennsylvania. They have asked me to improve the number of pin placements, but want to retain the original character of the greens. So having tight topos you can go back and get everything you want.”

At Vernango Valley Golf Course in Venango, Pennsylvania, close to where Cervone grew up, the club didn’t have a topographic map. Cervone has used the drone numerous times to quickly and easily get the information he needs. “Recently, we needed to address are some drainage issues around a particular green complex. I can go out and shoot this green complex and get the contour information I need. I will know where I can hit my low points and how we need to reshape the area to create the fall. It’s so much easier to work out where I want my first inlet, where the next swale should go. It makes the process more efficient.”

The club also has a stockpile of materials to use for shaping work. Cervone says: “With the drone, I can actually fly over that stockpile and create the topo and quickly do a volumetric calculation based on the aerial. I’ll then know exactly how much we have to work with.”

In the future, Cervone plans to spend more time investigating 3D modeling capabilities. “It can take a 3D model that you can look at, turn and flip as if it were that picture made out of clay,” he says. “We are always struggling graphically to get our proposed designs across to the layman. With this new technology now we can actually take a 3D model that everyone understands and show that to them so they can get a better picture in their minds of what the eventual design will look like—that’s what I’m after.”

If the enthusiasm with which ‘early adopter’ golf architects have for drones is anything to go by, it seems that the technology is here to stay.

“I’ve done a lot of aerial photography study and a lot of land terrain analysis,” says George, who previously served in the U.S. Army. “I’ve been around it and understand it—it’s so visual, so much clearer with these things that I think it brings a whole new level into terrain analysis.”

The Weird and the Wacky in Golf Course Architecture
Golf and innovation: hand in hand
To Top