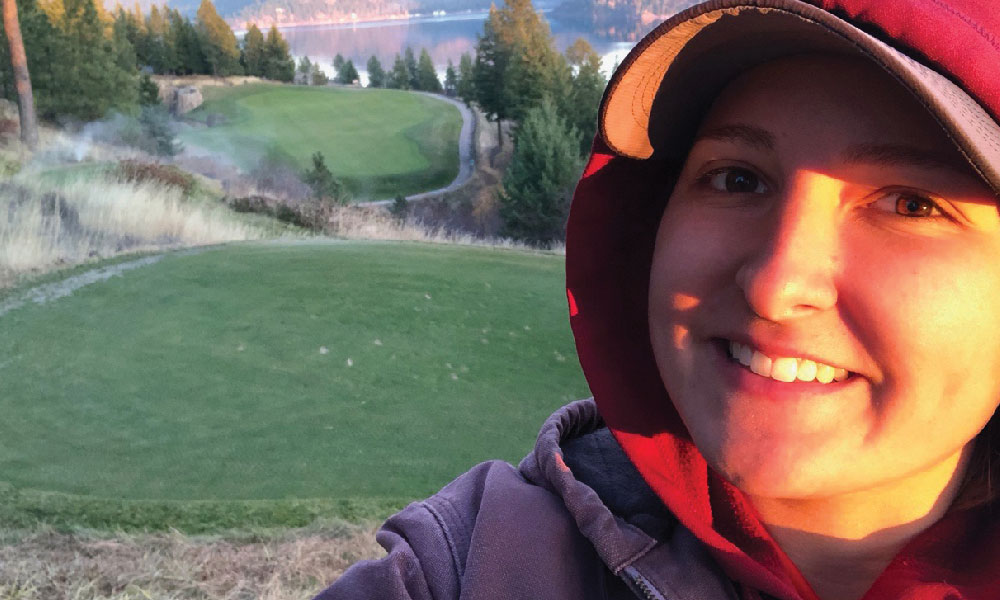 Whether you’re relatively new to turf maintenance and management or have logged decades on the job, chances are, no year of work in the profession stands out in your mind as clearly as your first year. Every experience you have in your new role is a first-time event.

According to a 2015 Harvard Business Review study of more than a million participants, the year one anniversary is also the time when voluntary turnover peaks. Apparently, many workers are willing to give a job a year of their lives before deciding that either the employer or the profession itself is just not the right fit. With this thought in mind, we sought out a rookie to interview. We wanted to hear about the first year’s ups, downs and surprises of the job for an assistant superintendent.

Unfolding over 125 acres of diverse terrain along the shores of northern Idaho’s Lake Coeur d’Alene, The Golf Club at Black Rock is breathtakingly beautiful. Thoughtfully designed into the landscape by architect Jim Engh, the course is defined by dramatic elevation changes, sweeping views of the Rocky Mountains Bitterroot Range and stop-you-in-your-tracks vistas of the lake.

By any measure, this upscale private course that sees just under 8,700 rounds of golf annually is a pretty incredible place to spend your first year, or any year, on the job. So it’s not surprising that the fledgling assistant superintendent at Black Rock had so much positive feedback to share.

March 4, 2020 officially marked Bryce Marie Weber’s one-year anniversary as assistant superintendent at The Golf Club at Black Rock. Unlike many who pursue this career, Bryce’s interest in the profession wasn’t piqued as a high schooler working summer shifts at the local golf course. In fact, she did not start college with the intent of studying turf management. Her lack of familiarity with the profession reflects how the golf industry has advanced in gender equality, yet still struggles to make young women aware of turf management as a viable career.

“I enrolled in Delaware Valley University (Doylestown, Pennsylvania) to pursue a career in Conservation and Wildlife Management,” said Bryce.” I’d never heard of Turf Management as a field of study until I got to college. But I became interested in it as I saw far more job ads for turf professionals than for people with degrees in conservation.”

“As soon as I changed my major,” said Bryce, “I knew it was a good decision for me. I liked my classes better. They came easier for me. My professors and classmates welcomed me and supported my change of majors. I am a detail-oriented person and I felt that that helped me do well in some of my coursework.”

Bryce interned at the Rock Creek Cattle Company Golf Course in Deer Lodge, Montana and at Wolf Creek Golf Club in Mesquite, Nevada. She described her internships as opportunities “to physically do something outside in a hands-on manner, instead of just learning it in a classroom.” Her experiences reinforced her decision to pursue a career as a golf course superintendent.

One Year Under Her Belt: Q & A

GCT: Idaho is a long way from Pennsylvania. How did you find your job?

Bryce: “I finished school in three and a half years instead of four, so I was ready to go to work as courses were opening up for the spring season, 2019. I connected on Twitter with Jessica Lenihan who is the assistant superintendent at Hayden Lake Country Club in Lake Hayden, Idaho. She is a graduate of the four-year turf program at Penn State. I was really interested in her insights on her job. She told me about the opening at Black Rock. It wasn’t even being advertised at the time.”

GCT: What was it like getting started on the job?

Bryce: “I was lucky because I started in March when there was still snow on the ground. I got to be part of opening the course up for the season, step by step, which is a great way to move into the job. During season, our crew gets to about 30 people but in off-season we drop down to 10 or 12.”

GCT: What different types of experiences have you had this past year?

Bryce: “I’ve been part of stripping out an entire green surround and resodding, of building a tee, and in November was my first time to be involved with or ever see the process of blowing out an irrigation system. I was one of the main people on that project. Plowing was another thing I was unfamiliar with doing, but I am learning to do in our snowy Idaho winters. We are responsible for plowing HOA common areas, golf course cart paths, the main road that runs through the property and other community areas.”

GCT: What’s been your biggest surprise this year?

Bryce: “It’s been good to feel comfortable being a manager, but I’ve been surprised how challenging it can be to communicate with part of our seasonal crew that speaks Spanish and very little English. I’ve also learned a lot about motivating the high school students that work in the summer. You’ve really got to switch up the tasks for them. If their work is repetitive or too boring, you lose them. But overall, I’ve been comfortable running the crew.

“Also, this has been my first time at a course with creeping bent grass fairways. I have worked at courses where you have it on the greens, but we also have it on our fairways, so the fairways here get a lot of attention.”

GCT: Are you the only woman on the crew and if so, has it mattered?

Bryce: “I am the only woman, but it hasn’t been an issue. No one gives me ‘girl’ jobs or holds back from giving me tougher roles to handle. I am glad about that. I think most of the crew is okay working with me, and if not, that’s them, not me. I certainly haven’t had a single day I wanted to quit, and if I have a day when I question myself, something always turns it around. Our crew is great, we see the product of our efforts, and of course, any day you get to work outside is a good day. It’s so beautiful here, and you do a project off by yourself on the course, you see the wildlife, and, not to sound corny, but it’s pretty hard to feel anything negative in this environment.”

GCT: Have you had a mentor this year?

Bryce: “My Superintendent Lonnie Aller is great, but I mostly turn to my fellow Assistant Superintendent, Dan Frederiksen. He’s been on the job about twelve years, so I take most of my questions to him.”

GCT: What have you found to be the biggest challenge of the course itself? Or what has been your most difficult day?

Bryce: “I think everyone on the staff would agree with me that our rough is a pain to keep. Our slopes are tough to get water to and keeping them green is challenging. My toughest day was May 24 last year. We had heavy rains, which resulted in one of our greens flooding. We worked about 14 hours that day, and there have been other 14-hour and longer days, like when we topdressed our greens. But they really are okay. Everyone jokes, and morale is good, which makes the time go faster, and long days or wet days go pretty quickly.”

Bryce Weber represents the face of the future in turf management. She is remarkable, not because she is a female in a job where male workers predominate, or because she found her job through the Twitterverse, or for any other reason that makes her different from her peers. Bryce is remarkable because she sounds so very much like countless other superintendents and assistants we have interviewed. She is motivated by her love of the outdoors, her need to dig in and see her accomplishments come to life and by a genuine appreciation for the team with whom she works and the club members she serves.

If this rookie-year story tells us anything, it is that the face of the future in golf course maintenance looks a lot like the faces of the present and of the past. Respect for nature, a love of nature and a desire to effect change define those who are drawn to this role. Core values are clearly holding steady, and this critical fact bodes well for the future of the profession.

Loop the loop at Wakefield Golf Club
Golfing in Africa – Making the Rounds: Part 7
To Top