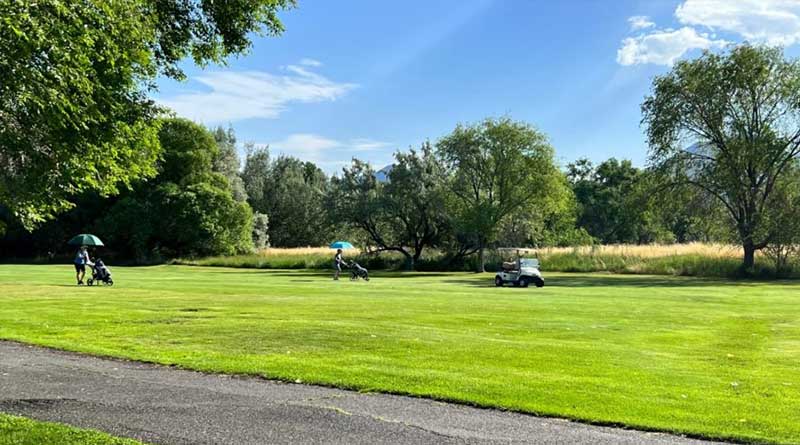 Salt Lake County Parks and Recreation says it is trying to use as little water as possible on its golf courses. It also says it has been able to decrease water use on most of its six municipally-owned golf courses over the last few years.

The lead superintendent of Greens for Salt Lake County, Lou Smith, says the county was able to do that by changing how it waters. One thing Salt Lake County Parks and Recreation monitors is evapotranspiration.

“That’s how much the [grass/turf] loses during the day from evaporation and transpiration. So our goal is to replace that,” Smith said. “We have weather stations and computers that help us do that.”

He said they download that information every night. Additionally, each day they change how much they need to water the grass to replace what was lost.

“But at this point, with the drought, we’re only replacing about 80% at the most,” Smith said.

Austin Beam, first assistant superintendent of Greens, said they used to use a manual irrigation system at Mick Riley.

“So we were coming in, night watering, having no idea how much water you’re putting into the course because it’s all manually done,” Beam said.

He also said after they stopped watering manually, the amount of water they used dropped a lot.

Beam said additionally they save water by only watering the areas they need to. He said they only focus on watering areas that people use to play golf or are active on.

Should water be used to maintain golf courses?

Liz Sollis, associate division director of community engagement at Salt Lake County Parks and Recreation, said she thinks it’s important that Salt Lake County has golf courses. She said they serve as a place for people to connect and spend time together. Sollis said municipally-owned golf courses are able to offer cheaper prices than private country clubs and that makes golf more accessible.

“People across all socio-economic statuses can come out and learn how to golf,” she said.

University of Utah City Planning Professor Alessandro Rigolon thinks there are better ways to utilize Utah’s land and water than having golf courses.

He believes there are ways that would benefit more people in the community. For example, he said, when 22 people are playing soccer on a soccer field, they are taking up less space than if 22 people were playing golf.

“You know, when they say that, what’s the best time to plant a tree was yesterday, and the second-best time is today,” Rigolon said.

Salt Lake County does set aside sections of each of its golf courses that are just open spaces and aren’t watered. Sollis said this is to preserve natural environments.

Data on total irrigated turf/total acres for the six municipally-owned golf courses can be seen below:

Devin Oldroyd contributed to this story.