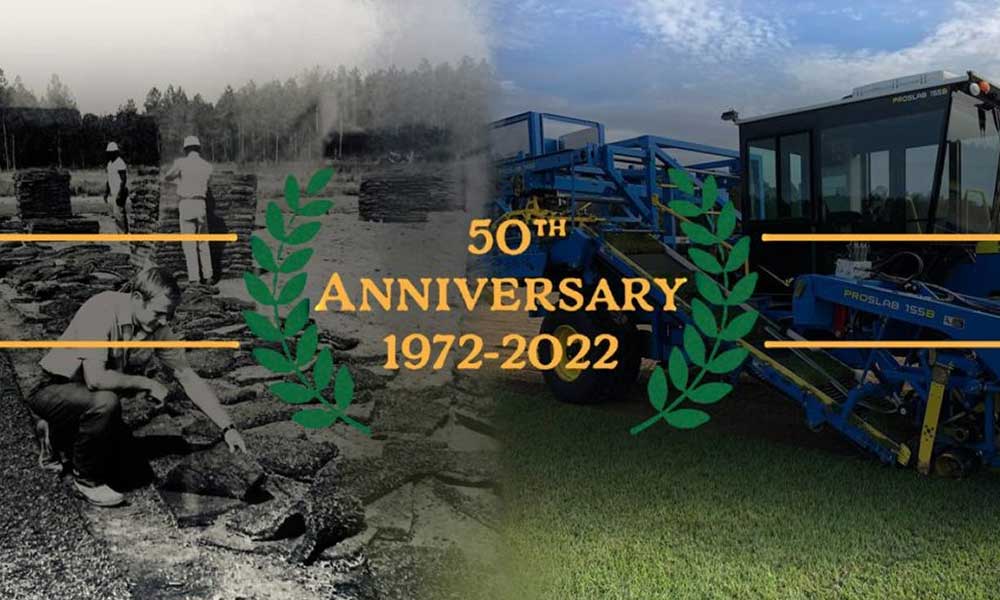 Fifty years ago, Jim Simpson founded Simpson Sod Company. Jim, who’d grown up on a farm in Mississippi carried his love for agriculture and farming throughout his life. The farm he was raised on produced sweet potatoes and cotton, raised cattle and had a dairy operation. When he went to college at Mississippi State, Jim changed his major during his first year to agriculture and later was among the first turfgrass graduates from this college.

After he graduated, Jim met Martin Beck, a sod farming pioneer growing grass in Alabama. The two started a 50-acre farm together near the New Orleans area and called it Mid-South Turf. When they sold the farm a few years later, Jim was ready to have a farm of his own.

So, in 1972, Jim bought 100 acres of farmland in Covington, Louisiana and founded Simpson Sod Company. Jim and his wife Bettye raised their two children, Andy and Jeff on the farm. While they’d spent their youth helping on the farm, by the 1990s both of their sons had started their careers in different places and were raising families. Jeff lived in Chicago with his wife and Andy was a pharmaceutical sales representative raising two children at the time with his wife, Shelly, in Texas.

“We were very happy in Texas and one night we were having dinner with Jim and Bettye discussing the future of his sod farming business. Jim told us about his different ideas, with a main one being that he was considering selling the company to his employees,” Shelly said. She remembered being in shock at dinner and couldn’t understand why Jim would want to sell Simpson Sod after all the years he’d spent building the business.

“We went home and I told Andy I felt like we were supposed to take over and move to Louisiana and do this. My whole family was there in Texas and I knew that meant we’d have to leave them. But I think God put it on my heart that we were supposed to do this,” she said.

At the time, she was working as a Certified Public Accountant with no background in sod farming. But Andy and Shelly decided they were supposed to take over the business and so they moved to Louisiana with their four children to start their venture in turfgrass in 2000.

“The fact we’ve been here for 50 years and technically are a family, second-generation run company is huge. We talk about it all the time. Jim sacrificed for many years and nobody knew who he was when he first moved here, but he built a reputation of integrity and quality to create a name for Simpson Sod. People in this area know who we are because we’ve been here so long,” Shelly said.

She went on to explain the company grew as more machinery and harvesting equipment came about over the years. “The biggest change over the past 50 years is the machinery available now that we didn’t have when we first started,” Shelly said. When the business first started, Jim and his team harvested grass with a sod cutter and stacked each piece by hand onto the truck. Then they started using forklifts and gradually progressed to using the equipment they operate with today.

A vast majority of Simpson Sod’s grass ends up as a homeowner’s lawn, Shelly shared. “So, a lot of the way we conduct our business and our focus, or niche is for the homeowner market. There are very few farms that sell and deliver one pallet of grass like we do. We’ll do those orders all day long. We’re not like a normal farm in that regard. Our bread and butter is selling to homeowners in our market from pieces to a few pallets of sod.”

Their farm also utilizes Turf Logistics software to aid with invoicing and orders. Although they’ve been using it for a long time, this year they plan to add the truck routing and driver applications to streamline communication from harvesting to delivery to a customer. “Since we’re a little different, my truck driver might have one load with 13 drops. So, it can be a little more technical and we’re excited to see how it works for that.” Shelly added they like that Turf Logistics is geared specifically to help the turfgrass industry and they find it helpful for their business operations.

Prior to Hurricane Katrina hitting their region in August 2005, Shelly said the farm was not located on a high-profile road. People would drive to find them as they were the only sod farm in the area. “Katrina changed all of that with all of the destruction and rebuilding. All the farms in Foley, AL had to start supplying grass over here in Louisiana. It forced a lot of people to be transplanted here which changed the demographics of this area to grow with new construction,” Shelly said.
They sold the land their office was on at that time and moved onto U.S. Highway 190, where they operate more of an outlet now that sells grass and chemicals while assisting landscapers and homeowners with questions they have about their lawn.

Over the past 20-30 years, Shelly said that the area around their farm has exploded. “It’s more desirable for people to live here and we’ve seen a huge demographic change as more people have moved here.”

“The growth in our area has allowed us to grow as a company. We expanded to different varieties and when Jim first met Tobey Wagner of Sod Solutions, he decided to start growing different grasses that would change our business. In 1995 my father-in-law signed the contract to grow Palmetto® St. Augustinegrass.”

In 2000, Simpson Sod signed a contract to grow EMPIRE® Zoysiagrass. “I believe we were the first farm to grow EMPIRE in Louisiana. For the first five years, we spent probably hundreds of thousands of dollars in advertising on the radio to promote EMPIRE since no one knew what it was. My yard was the very first yard of EMPIRE zoysia in our area,” Shelly said.

Shelly said putting the money that they did into promoting EMPIRE is still one of the best things we’ve ever done. “With the internet system in place now and Sod Solutions making it easier to promote grasses has been exciting. In the last five years, and possibly longer we now have people calling us asking specifically for EMPIRE Zoysia. It has name recognition in this area now that we’ve done so many yards that landscapers and homeowners call and request this grass,” she said. “Celebration is a very well-known grass and a lot of that is due to Sod Solutions having it specified for projects. And people call us and ask specifically for Palmetto, not just for St. Augustine.”

In 2019, Simpson Sod supplied 35 acres of Celebration® Bermudagrass for the TPC Louisiana course in time for the PGA Zurich Classic of New Orleans tournament. “They worked with us and we actually grew Celebration for the entire golf course which was a really big deal for us. We still deliver grass there from time to time for renovations and small projects,” Shelly said. Simpson Sod is currently supplying three acres for a project this month at TPC Louisiana. Shelly explained seeing their grass on a notable PGA Tour tournament was pretty surreal for them.

Simpson Sod is a member of Turfgrass Producers International (TPI) and attends the annual conference to learn about chemical applications and new equipment on the market that have benefited other sod businesses. “We learn what works and doesn’t work for other sod producers. It’s amazing what you can learn from talking to other farms and the classes are always great too. Farming is very unique and there are so many variables and things that can change so that’s a value from TPI we’ve had over the years, is just learning with other farmers.”

Simpson Sod employs 30 people between the farm, office staff, sales and installation crews. When Jim started the business, Simpson Sod was spread among several locations but when Shelly and Andy bought the business, they spent the next six years moving all of the farming operations to one location in Poplarville, MS on one piece of property, removing all the leased properties. “We have had a little less than 900 acres that we’ve been farming there since about 2006-2007.”

Shelly explained that she could not run Simpson Sod without her business partner, Kirk Triplett who has held every role in their operations. She said coming into the business with no experience in farming or turfgrass operations, she relied heavily on Jim and Kirk’s expertise to be successful over the past 20 years.

“Jim poured his knowledge about farming, chemicals and management into Kirk. When he retired between 2000-2002, Kirk was in charge of all farming operations from planting, harvesting and everything in between. He’s worked on and off since high school for Jim so he’s done everything there is at Simpson Sod from farming, making sales calls for the grass, installing sod, running crews to driving an 18-wheeler for the transportation of sod,” Shelly said. “We wouldn’t be where we are today without Jim obviously putting in the time and effort and all that he did. And honestly Kirk too. This wouldn’t be what it is today without him,” she said.

In 2008, Kirk’s son, Bobby started working for the business driving trucks and delivering sod for a little over five years. From there, Bobby transitioned to going to the farm and he became an assistant for his father.

“He’s awesome. He cares greatly and it’s good because they bounce ideas off of each other. We’re training him for a point later on in the future when Kirk decides to retire to take over his position,” Shelly said.

“For me personally, it was a crazy decision 25 years ago but it honestly has been the best decision we ever made and I personally cannot imagine doing anything else with my life. I absolutely love what we do,” Shelly said. “Not just what we do but I have amazing people that work for me and most of them don’t leave.”

Most of Simpson Sod’s employees have been with the business anywhere from 5-37 years. Kirk has been with the company for over 30 years and Bobby has been there for 14 years. “This whole operation, even though we aren’t blood-related, it just feels like we’re a family. I can’t imagine doing this without them.”

“If I think about what 50 years mean to me, it means I get to come to work every day with awesome people and I truly couldn’t have done what I’ve done over the years without them. It’s truly been a team effort in everything that we’ve done.”