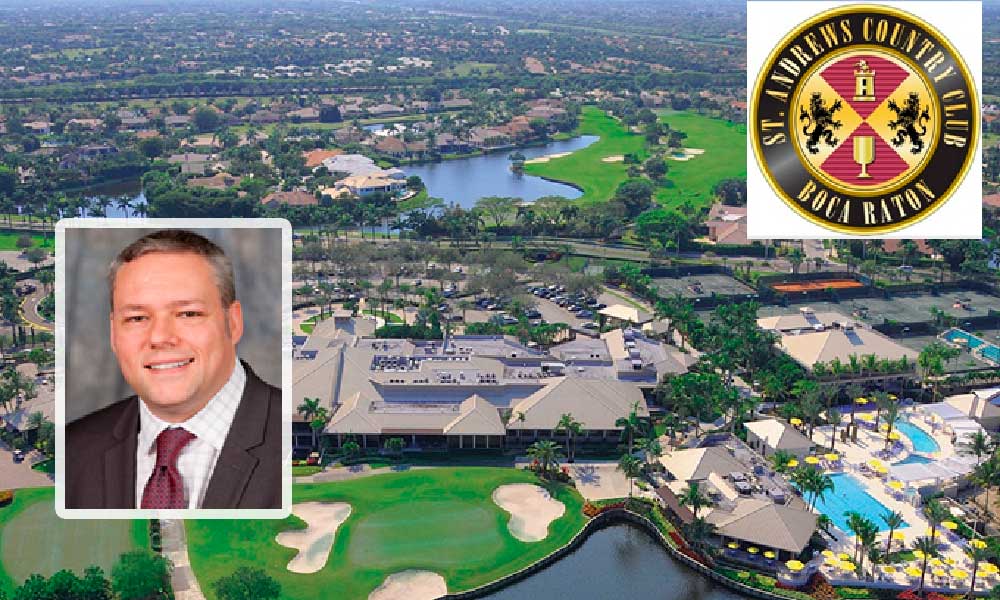 St. Andrews Country Club of Boca Raton, has promoted Rick Dente to serve as its new Chief Operating Officer and General Manager beginning November 1. Dente served as Assistant General Manager of St. Andrews from 2016 to present under Craig D. Martin, CCM who announced his retirement in June.
|
St. Andrews Country Club President, Ron Gallatin states, “The board of governors, members and staff are pleased that Rick will be leading the club into the future. Rick provides for a seamless transition and a continuation of the great quality of leadership that we have enjoyed from Craig.”

Earlier in his career, Dente served as the Club Manager at Pinehurst Country Club, Pinehurst Resort and Country Club; Clubhouse Manager/AGM at the St. Francis Yacht Club; and nine years of progressive experience at The Polo Club of Boca Raton as Director of Operations.

A native of South Africa, Dente resides in Boca Raton with his long-time girlfriend and their 5 rescue dogs and cat. He has numerous certifications in leadership, social responsibility and fine dining.

“I am honored to have been selected to lead St. Andrews Country Club into the future and appreciate the trust the board of governors, the membership and the staff have in my abilities,” said Rick Dente, Assistant General Manager. “I am grateful for the opportunity to have trained for this position under the tutelage of Craig Martin. His unbridled passion in delivering an exceptional member experience along with his vision to drive St. Andrews to an industry-wide recognition as a premier club has paved the way for us to take the next step in the Club’s future.”

In June, St. Andrews Country Club announced to its membership the retirement of long-time Chief Operating Officer and General Manager, Craig D. Martin, CCM effective October 31, 2019. Martin successfully managed the club for 12 years, overseeing $45 million in renovations and new construction, on time and on budget. Under his tenure St. Andrews received and maintains prestigious industry recognitions such as Distinguished Elite Club of the World by Boardroom magazine and is in the Top 10 of America’s Healthiest Clubs by Prevo Health Solutions. Martin isn’t done in the Private Club industry and with his 35+ years of experience in securing consulting roles with private clubs nationwide.