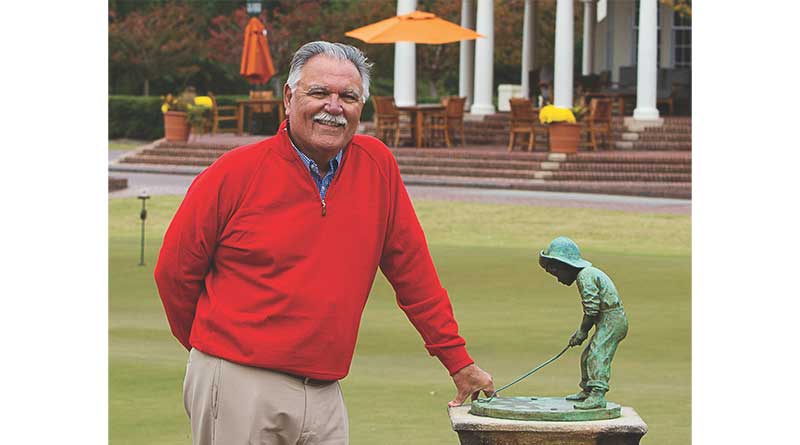 Bob Farren Jr., CGCS and director of the golf course and grounds management at Pinehurst (N.C.) Resort will be honored with the 2022 Col. John Morley Award from the Golf Course Superintendents Association of America (GCSAA).

The Col. John Morley Award, named for GCSAA’s founder, was revamped in 2021 and is now presented annually to an individual who is or has been a GCSAA Class A or B superintendent member and has made a significant contribution to the advancement of the golf course superintendent’s profession. The contribution must be significant in both substance and duration.

The Morley Award joins the status of the other GCSAA Pinnacle Award, the Old Tom Morris Award, which will now be limited to those outside of the GCSAA membership who have helped mold the welfare of the game.

Farren, a 41-year GCSAA member, seemed destined to join the golf industry as he grew up watching his father, Bob Farren Sr., served as superintendent at Big Bend Golf Course in Tornado, W.Va.

“I really never had any desire to do anything but this,” Farren said. “I don’t know why, probably because I spent so much time at the golf course with my father and his friends. They were like uncles to me, so it was like one big family. I just grew up going there since I was 8, 9, 10 years old. In my high school years, I worked on the golf course, then we’d play on the golf course. It was just a big fraternity of people.”

During Farren’s tenure, Pinehurst No. 2 earned the distinction as the site of more golf championships than any other course in America, including the U.S. Open, PGA Championship, Ryder Cup Matches, and PGA Tour Championship. Farren has been involved in 14 USGA championships, including three U.S. Opens, and was crucial in the unprecedented double of 2014, when No. 2 hosted the U.S. Open and the U.S. Women’s Open in consecutive weeks. And there are more to come: The USGA last year announced Pinehurst would serve as an “anchor site” for the U.S. Open, to be played on No. 2 in 2024, 2029, 2035, 2041, and 2047.

His contributions to the industry extend well beyond high-profile events. Among the other accolades, Farren has received include GCSAA’s President’s Award for Environmental Stewardship in 2007; Golf Digest’s Green Star Award for outstanding environmental practices in 2014; ANUVIA’s Legends Award in 2018 and induction into the Carolinas Golf Hall of Fame in 2018.

“Bob truly embodies all that the Morley Award represents,” GCSAA CEO Rhett Evans said. “His impact on the game has been seen by millions around the world who have watched televised championship events at Pinehurst, but he has had a more direct influence on those whom he has mentored and the many ways he has volunteered his time to give back to the industry.”

In addition to having been involved with the GCSAA Foundation for years and serving on various GCSAA committees, Farren is or has been a USGA Green Section committee member, on the Bayer Green Start Academy advisory board, a member of the Musser International Turfgrass Foundation board of directors, a board member of the First Tee of Sandhills and chair of the Village of Pinehurst Historic Preservation Commission.

Farren will formally receive the award on Feb. 8 as part of the Opening Session of the 2022 GCSAA Conference and Trade Show in San Diego.