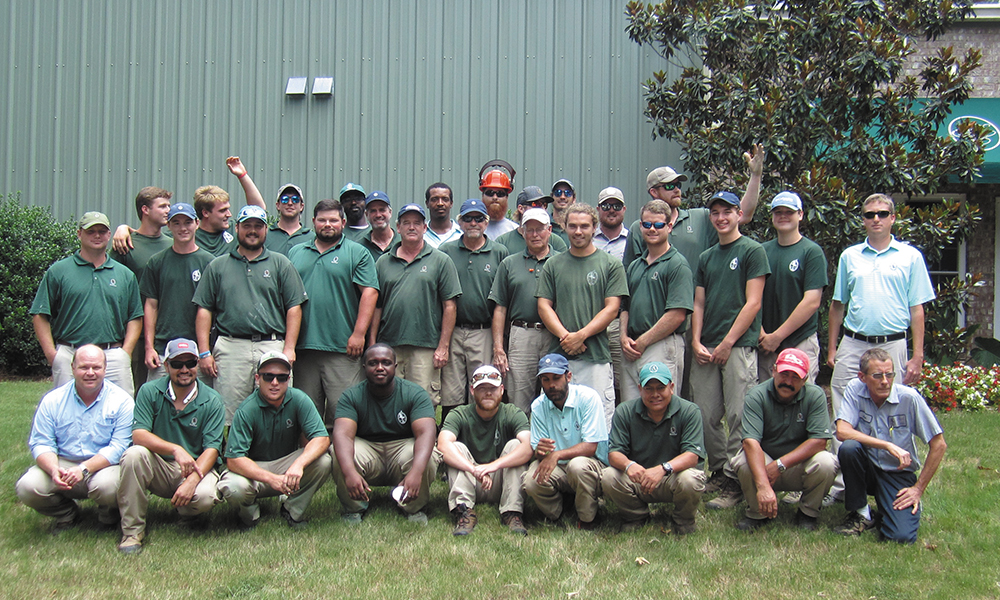 Rex Davis, superintendent at Shoal Creek, began preparation for the U.S. Women’s Open with ground breaking for renovation in 2016. Rex had just arrived back in Alabama to fill retiring, and legendary, superintendent, Jim Simmon‘s CGCS, position at Shoal Creek. And what a buzz saw he walked into.

The reconstruction saw renovation of all the greens and bunkers and adding a few select tees on the Jack Nicklaus designed course. Essentially, design of the course remained the same. In addition to the renovation, Davis built a new maintenance team over the past two years. He said, “We’d had a 50% changeover in staff. A lot of the guys, when we started construction, had either just started work at Shoal Creek, or had worked there less than a year. We had good veterans, but 75% of our experience was contained within six people. 77% of our staff had worked on a golf course one year or less. Honestly, we had a lot of guys on the crew who didn’t know the difference in a fairway and a green.”

According to Davis, “The skill of this staff grew exponentially during the six months prior to the Open. Their ability to execute tasks and understanding of the purpose behind the task really matured.” When asked about training methods in this crucible, Davis said that repetition was key. “It’s like baseball. If you field enough ground balls it becomes routine. They would stay on one task until they got up to speed and then move on to master the next, because we want everyone to be capable in all aspects of the work.”

Fortunately, Davis had a talented group of Assistant’s and Assistant’s in Training who helped reinforce all that they were trying to achieve with the staff in preparation for the Open and keeping Shoal Creek’s standards intact. Presently he has three assistant’s, Adam Harris, Garrett Gaches and Paul Dawson.

“Paul interned at Quail Hollow Club and worked the PGA Championship. He began working at Shoal in 2017 and was a huge help in refining the skills of the staff and knowing what tournament conditioning should be like. Assistant Garrett Gaches started out as a Spray Tech and impressed me so much that I moved him into the Assistant’s role a few months after he started. It was easy to tell that he was built for leadership. In September of 2016 one of the assistant’s left to go to Atlanta Country Club and Adam Harris came on board. Aiden had worked with me previously in Charlotte, North Carolina. He helped shape the management team and being familiar with practices we had used previously was a huge help with managing the new greens following construction. Ben Andric came to us as an in-tern in 2017. He interned from February until August and was interested in staying on afterwards so we moved him to an Assistant in Training position.”

Rex has a diversified crowd at Shoal Creek. In fact, surprisingly, he is the only Alabama native. Garrett comes from Conyers, Georgia and Adam from neighboring Ft. Mill, South Carolina. Paul, hails from Perth, Australia. Ben is from Port St. Lucie, Florida and as many of you know, Jim is originally from Ohio, though he may now qualify as an Alabamian!

Apart from the superintendents and assistants who managed the Open, there are many more talented crew who stepped up. Irrigation technician Mitchell Lowe grew up about five miles from Shoal Creek. “He has blossomed in the past five years and when the opening came for an irrigation tech he was the logical fit and has ex-celled at the job. In the future he will be expanding his role on our staff and tackling more projects.

event hosted at Shoal Creek prior to the 1986 Amateur. Mark is one of the key six who had experience going into the tournament. Chris Hollyfield and Basilio Arroyo are two others who have been essential. They handle a lot of the big machinery and perform critical tasks on the course.”

“Gildardo Perez, our Assistant Equipment Technician started on the crew. He is very mechanically inclined and he was moved in to help Joe. Joe Partridge rounds out the group. Joe was an irrigation tech at one time. He also performed duties as clubhouse horticulturalist and then worked as an equipment technician. Next to Jim Simmons, Joe knows the property as well as anyone and makes everything go. He has such a wealth of knowledge that I don’t know what we would do without him. He has more common sense than anyone I’ve encountered. In addition, the work couldn’t have been done without Josh Wiggins, Hayden Taylor, Brad Williams, Alex Zuniga and E. B. Everett.”
Jim Simmons, CGCS handled all the special projects for the Open with just two staff members, Rafael Perez and Marvin Patterson. “These are some of the more skilled employees on the golf course. They helped build bridges and roads and shaped drain-age on the course. The amount of infrastructure Jim put in with just two of the crew in two years is amazing.”

It’s easy for Rex to talk about his staff and the phenomenal job they are performing. “It’s like a family around here and I feel fortunate to be adopted into it without any previous ties to Shoal Creek. Seeing the number of people who have worked here previously and came back to pay homage to Jim and the club, well, it wasn’t a normal tournament experience.”

“We couldn’t ride a mower for six days because of the weather. Everyone put extra effort in walking miles with backpack blowers and dew whipping fairways and everyone did it with a smile. Volunteers did what they were asked to do and gave more.”

“The golf course started drying out on Friday. We would start play and stop play, start and stop. We made a decision about five o’clock to try and mow the fairways that evening. Play wouldn’t stop until 8-8:30 to get in all the daylight they could. Typically, this is when the shift is ending. Volunteers went to Bass Pro and bought every head lamp and flashlight that could be found. I asked the room of volunteers if anyone would stay and mow, and 80% of these folks who had been working countless hours raised their hands; I was as flattered as I’ve ever been profession-ally; unfortunately, weather interrupted our evening mowing once again. My wife kept track of the hours worked, (I never did,) and the total was 150 hours in one week. That is typically a month’s worth of work.”

Volunteers made the tournament possible and close to 70 came from all over the country to help out. Jim Simmons has an extensive network of volunteers who have assisted at Shoal Creek tournaments and Rex brought in folks he worked with at Providence Country Club in Charlotte and also from Quail Hollow. “I was touched that two of my former assistants came as well as a good friend who is a superintendent in Cape Cod and Kyle Marshal, Director of Maintenance at Capital City Club in Atlanta spent every day with us.”

Additionally, members of the Club were annexed and helped various capacities during the tournament. Cathy White, administrative assistant to Rex, organized the volunteers in addition to her other duties. She assembled volunteer bags, coordinated meals and took care of the administrative aspects that arose. Cathy also fielded questions as they arose. “It was extremely helpful that we could leave all that with her and turn our attention to the golf course,” Rex said.

Rex sums it up: “It was tough, but fun. Working with people to overcome challenges gives a rare opportunity to get to know them.”

Let us know when you get ready to gear up for the next tournament, Rex!