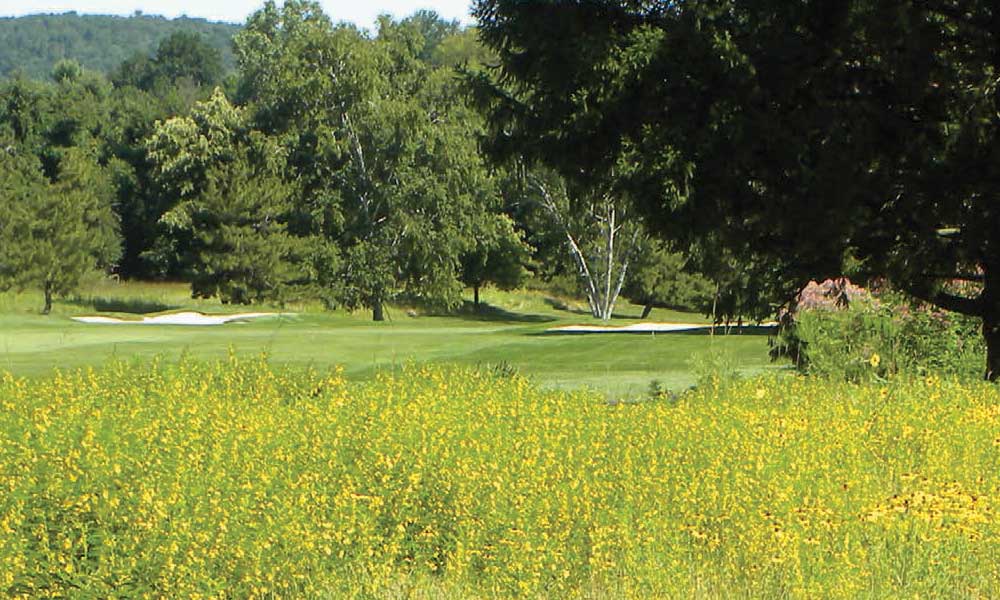 It was a beautiful September afternoon, not a cloud in the sky and just enough of a gentle breeze to allow the meadow grass to shimmer and sway. We had 13 girl scouts at the course that day, observing and learning about our environmental efforts and how we encourage butterflies to live on the course. The group was huddled around one of the scouts, as she gently placed an identification sticker on the wing of a Monarch butterfly that had just been caught resting on some milkweed. The I.D. number, sex of the butterfly, and location were written down on the sheet that was provided. This Monarch was about to start its annual fall migration all the way to Mexico.

When the Monarch was released, the whole troop cheered the butterfly on. “Good luck!” hollered one. “See you in Mexico!” yelled another. The butterfly took to the wind and was gone in a matter of seconds. To think such a small, fragile butterfly could make it all the way to Mexico. Observing this kind of miracle of nature is just one example of the many benefits of creating naturalized areas on your course.

What Areas Qualify as Native?
The areas that I favor for naturalization are those that are basically out of the range of play. They’re the wooded areas and their edges or out-of-bound areas or hazards. They might include pond and stream banks, even entrance roads or property boundaries–any area that’s not intended for play and offers different types of habitats for plants and animals. If you hit your ball in one of these areas, odds are you won’t be able to find it, let alone hit it!

Though many create naturalized areas on their courses with the hope of reducing maintenance costs, this rarely provides the savings expected. The reality: There is no such thing as a maintenance-free area. But if you concentrate on allowing natives to dominate these areas, you can realize some savings, especially if you compare these maintenance efforts with what it takes to maintain nicely manicured bluegrass lawns.

In the end, no matter where you create native areas, they’re not going to stay native without a fair amount of time and effort. And sadly, we are mostly to blame for the labor-intensive nature of native areas! Because of our often-unknowing introduction of invasive plants and animals, native areas require a lot of attention to become–and remain–truly native.

Take, for instance, the wooded area to the right of our 12th hole. One day, we found a couple of spicebush butterflies flying around there. No surprise, we soon discovered that we had a whole bunch of spicebush, the main host plant for the spicebush butterfly, right there in the woods on 12. Here was an area of the course that we would just blow leaves into. Now we go into that area regularly with loppers to cut back the invasive burning bushes, bittersweet, and barberry bushes to allow the spicebushes room to flourish and grow.

When the Native Bug Bit Me
Like most everyone in the turf business, I went to school for turf. Ecology? What was that? I started out with unirrigated, out-of-play rough areas because they were too far from the double-row system we had.

For years we mowed these areas at 2.5 inches and applied a spring preemergent, a couple of fertilizer applications, and the occasional dandelion, clover spray. If we had a typical summer, these areas would go dormant. If we had a particularly hot dry August, they would turn into dust bowls.

Hoping to save some budget dollars, we decided to let many of these areas grow in; we simply stopped mowing them. We knew we would be providing habitat but, at that point, had no idea of the opportunities that existed. The first couple of years, these areas were great stands of pure drought-tolerant grasses. After all, that’s all that could survive regular mowings and no irrigation. But as time passed, other plants started colonizing these areas.

One of the first was milkweed. No other plant growing in the middle of a grassy area sticks out more than milkweed. So, of course, we began getting complaints that these areas looked unkempt. In the end, however, it was this unsightly plant that became the start of my ecological native management efforts, indirectly earning the membership’s support for creating native areas.

Milkweed, I quickly learned, is the only plant that Monarch butterflies lay their eggs on, so I knew I needed to find a way to get the club to embrace this plant’s benefits and allow it to thrive in our edges. I decided to see if I could find any caterpillars, and sure enough, after some trial and error, I found what I was looking for.

I then went out and purchased an aquarium, loaded it up with plants and caterpillars, and placed it in the ladies locker room. I figured if the ladies reacted well to this microcosm of a natural habitat, then I could expand.

The caterpillars instantly became a hit, and the aquarium became a topic of conversation. I must say, the caterpillars are pretty handsome creatures, and the metamorphosis from caterpillar to butterfly is amazing to watch. The idea that the DNA of a butterfly is the same as that of the caterpillar is remarkable to me.
We now place the aquarium in the main foyer of the clubhouse every summer. It generates interest and, more important, sparks conversation about how we maintain our edges for the environment.

A Labor of Love
Since the introduction of milkweed, we have had numerous plants begin colonizing areas. Of course, as a turf school graduate, I knew next to nothing about the care and feeding of native areas–or cultivating our native versus invasive species.

So the learning began. Over the past 10 years, I have done a lot of research. I’ve spent many hours on Google looking up plants, trying to identify them, learning their purpose. Everything native is here for a reason. It has a job to do in nature.

Take thistle, for example. I learned that there are more than 45 different native species of thistle in the United States. In general it’s a great plant, but to complicate matters, Canada thistle was just put on the New York invasive species list. Thistle is great for pollinators, and this plant’s seeds are eaten by birds. It is especially important for finches because they make their nests in thistle. But try convincing the golf committee that the seven-foot-tall bull thistle on the eighth hole is there for finches!

Actually, it hasn’t been as hard a sell as you would think. I have found it very rewarding when I explain why certain plants are allowed to grow. Once educated, most people will at least acknowledge that these edges are far from unmanaged. At Rockland, we have 130 acres, and I like to say all of it is managed to some degree.

Spotting the Foreigners
Even without doing any research at all, if you really observe your landscape, you can pretty much pick out the plants that aren’t native. Take forsythia. What layperson would ever suspect that one of the most common spring flowering shrubs in our area is not native? Well, surprise! This plant is actually from China.

Now, I have no problem with China, but apparently our insects do. Next time you’re looking at a forsythia bush, look a little closer. You won’t see a single bee or insect searching for nectar in one of the flowers! That’s a sure sign that a plant is not native.

Another common spring plant, the dandelion, is also not native–though, I have seen a few sweat bees on them. Clover, on the other hand, is obviously a native plant; it is usually teeming with bees.

In the book Bringing Nature Home by University of Delaware professor Doug Tallamy, I learned that there are more than 557 different kinds of caterpillars on oak trees. By contrast, there are only three species on the Ginkgo tree, which is also native to China.

In all my reading on this topic, there is one thing that all the writers and researchers seem to agree on: If we are to maintain the balance of nature and allow our native plants, insects, and animals to thrive, we should manage our properties as close to the way Nature intended.

I’ve Done a 180
After delving into the ecology of our landscape, my thinking has changed 180 degrees. We shouldn’t just sit back and think we are stewards of the environment because our golf courses provide open space. We should try to do more.

Take the Florida citrus industry. They have groves that span thousands of acres. They boast oxygen-producing, carbon-sequestering benefits, which is true, but of course, citrus trees are not native to Florida; they are from Valencia. Nonetheless, the citrus industry touts that they’re friendly to the environment and are good neighbors, practicing sustainability, helping the water supply with groundwater recharge, holding storm water, producing oxygen, and enhancing air quality.

Sound familiar?
Are golf courses, with their bentgrass fairways, bluegrass roughs that much different? A bit. Those Florida citrus groves are de-signed to leave large tracts of land undeveloped for wildlife habitat and natural buffers. The citrus industry–sustainable agriculture–realizes the importance of these “native areas.” Do we?

If you asked me 15 years ago what the best way to be environmentally proactive was, I would have said, “Everyone stay off. No trespassing. Let nature take its course.” I have since come to the conclusion that that would be one of the worst things we could do. We need to manage all the land. If left untended, I’m afraid our lush green fairways would just become overgrown with foreign intruders–upsetting the natural balance among native plants, insects, and animals.

Take those caterpillars: They are a tremendous food source for birds and other wildlife. And nearly 20 percent of the red fox’s diet consists of insects. These are just a few more of the countless examples of the delicate balance of nature, and to think, we have the power, in what we do, to play a part in seeing that this important relationship among plants, insects, and animals continues.

Reprinted with permission from the May/June 2015 issue of the Tee to Green, a publication of the Metropolitan Golf Course Superintendents Association.