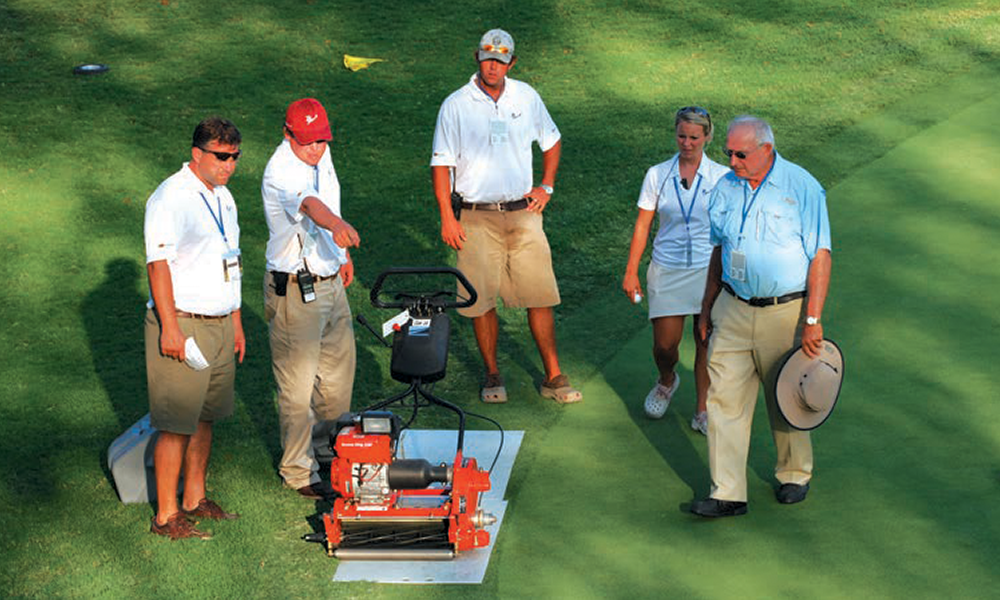 “Put some water on the greens, please!!!” He implored with a smile. Tired from months of long days turning into nights watching irrigation cycles run, I could only muster up a trite…

“Put some water on the greens, please!!!”

He implored with a wry smile. Tired from months of long days turning into nights watching irrigation cycles run, I could only muster up a trite “I wouldn’t bet your life on it.”

Twenty-three years old, watering ryegrass in the 10th fairway at Augusta National Golf Club and a skinny amateur named Tiger Woods was complaining (though mostly in fun) about how our work was having an impact. The defining moment for me? Maybe.

I certainly had no idea that 12 years later, Mr. Woods would lip out on the eighteenth green at Southern Hills Country Club and tie the low round in Major Championship history under my watch as Golf Course Superintendent.

Sometime in that early part of my tenure at Augusta, my career vision really clarified.

The adrenaline rush and satisfaction of having your work scrutinized by the world is like no other pressure and no other satisfaction.

I was fortunate to work for two of the best in Marsh Benson and Brad Owen. Marsh would give you the freedom to expose your own weaknesses and Brad would challenge you every minute of every day.

Walker Cups, Amateurs, Opens, PGA’s, Memorial, Senior Opens, British Opens and Nissan Championship all were being hosted by individuals I am fortunate to call my friends.

Having enjoyed the many responsibilities bestowed upon me while at Augusta, I never asked to return as a volunteer for The Masters as it would have seemed weird to be there with less responsibilities

Instead, I returned as a spectator and enjoyed the best run event in all of sport.

Usually when Tim wants to see me, it is not good as he disagrees with a decision I may have helped influence.

Today was not one of those days. John Skylinski had decided to leave Southern Hills Country Club and Tim wanted to introduce me to General Manager, Nick Sidorakis.

I wondered immediately if my Greens Chairman had some sort of super-natural powers.

Was this my opportunity to fulfill my dream?

We brought Major Championship Golf to a small, private Golf Club in the Florida Keys. For eight years the membership never said no, the risk-taking was consistent with the self-made members who belonged to Card Sound. They fell in love with all things aggressive and helped us put the club on the map in regards to golf course conditioning.

Triplex fairways, massive walk mow areas, fast greens, major renovation, large intern program and an overall commitment to an excellent staff were just some of the reasons which made this place special. I learned a great deal at Card Sound and made life-long friends.

“It doesn’t look like I will get the chance to host a Championship,” I told then Card Sound Greens Chairman, Rick Brock. To which he replied, “That’s B.S. I believe you accomplish your dreams, all you have to do is try.” I was always honest with Card Sound about my goals and they supported me. You don’t often see this in the industry.

The US Open was at Winged Foot and I arrived on the Saturday before the Championship seeking out my friend and Superintendent, Eric Greytok. “Tim is looking for you,” Eric said, referring to Tim Moraghan of the USGA.

The next month was filled with phone calls seeking advice or garnering research on Southern Hills. Over the years I had developed a trusted friendship with Paul Latshaw and was presently in a business partnership with him (which I am sure didn’t excite him that I may leave the business in Florida).

After acquiring all the best advice available, I proceeded to give a less than stellar performance during an interview process which had me at best on my heels. Fortunately, two weeks later I was given the opportunity to interview again and GM, Nick Sidorakis trusted me with the reputation of one of the great facilities in the world heading into the PGA Championship just eleven months away. All I kept thinking was… “Don’t let him down.”

In eleven months, we adjusted to a new Superintendent, installed 2.5 miles of power, 36 fan locations, progressed through an Arborcom study including the removal of the largest American Elm in Oklahoma, and developed 34 new staff members. One never can be sure how staff will evolve when they accept a new position.

Fortunately, I inherited what I consider to be the best Assistant Superintendents in the country and a membership receptive to change even when things are good. Combining the commitment and talent of Jeremy Dobson, Chris Wilson and Roy Bradshaw with an influx of top, soon-to-be Assistant Superintendents from around the country was the “big break” in overcoming the unseen obstacles which lie ahead.

The vast majority of the members at Southern Hills could not have pointed me out to you if they were asked.

Work was fast-paced and focused on one major goal set forth by the PGA of America’s Kerry Haigh. “We just need to have grass on the greens,” Kerry would repeat each time he visited Southern Hills.

February brought nearly 30 days of ice cover. May, June, and the first half of July consisted of daily rains. The 2007 PGA Championship was the hottest Major in history with temperatures over 105 degrees.

You always wanted to inspire Marsh and never wanted to let Brad down. The unique environment which shaped my style of management in ways I will never be able to explain. Amazingly, I still feel that way today. Augusta provided the unique opportunity to meet many of the best in the business.

During this time I was able to travel to other Championships making an abundance of new friends/acquaintances. I remember never wanting to leave the crucible which was Augusta, often interviewing for very good Assistant positions, only to pass on the opportunities when they arose. Ultimately, I left Augusta for the Golf Course Superintendent position at Card Sound Golf Club in Key Largo, Florida.

Never having been an Assistant Superintendent, I Initially had no interest in going to South Florida as a Superintendent. It was not clear to me how such a move was going to help me accomplish my goal of hosting a Major Championship. At the urging of others, I did it anyway.

Over the next eight years, my only contact with Major Championship Golf was through volunteering for events when my friends would host them.

My house was filled with family. A few local residences provided shelter for many of those friends whose Major Championships I have volunteered for over the years. The dorms at Oral Roberts University were occupied by old friends and soon to be new ones. Over 100 in all came out of friendship, devotion, passion, experience or love. All are unforgettable parts of the experience.

Twelve years ago, Tiger Woods began his quest to surpass Jack Nicklaus’ major championship record of 18 victories. Coincidently and without comparison, my quest to host a major championship began at pretty much the same place and time. At the exact time, Tiger got 13, my dream was fulfilled.

Last year was such a rewarding experience, through all the little things that needed to be done, and 2008 will be just as challenging, preparing for the pride and excitement of the 2009 U.S. Amateur.

Special thanks to The Golf Course Trades for adding this new forum for us all. I’m excited about the changes that have occurred with The Golf Course Trades, and being the first to kick off these articles to my colleagues makes it just as sweet. As I thumb through this useful buying tool monthly, I look forward to reading your articles as well.