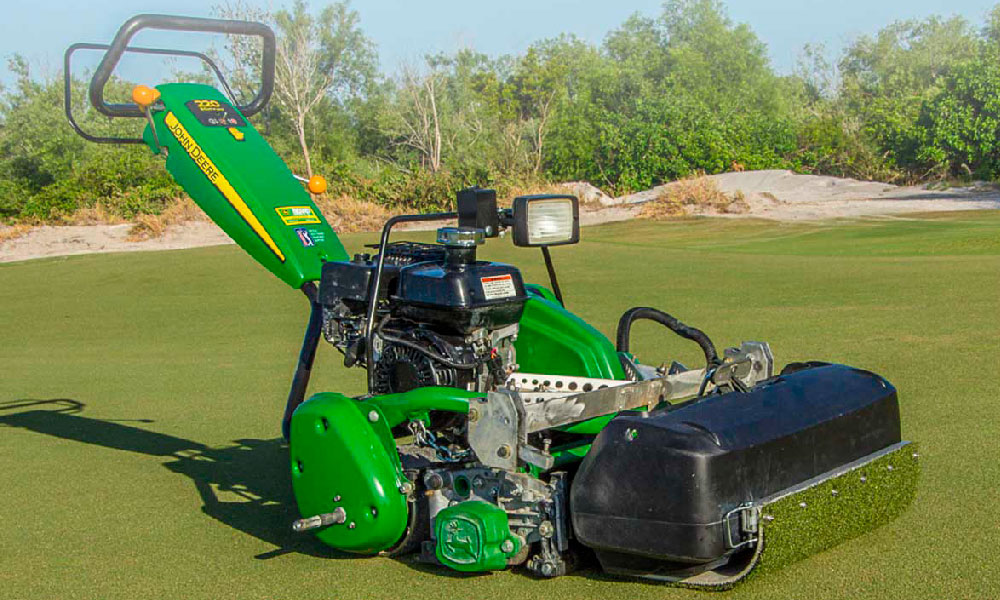 Just ask any professional in any business: you’ve got to have a few tricks up your sleeve if you want to really excel at what you do. And, guaranteed, superintendents in every neck of the woods are certainly going to utilize a few ingenious “tricks” to get the job done well. From that custom Cushman to that sub-surface aeration system, from that super-charged leaf blower to that state-of-the-art brushing system, there are many “tricks” that superintendents can use to their advantage.

In fact, some superintendents, such as Rodney Hine, owner, and proprietor of the highly effective TurfTrainer brushing system, don’t wait for the “trick” to come along. They just invent it themselves.

True, brushing greens is hardly a new idea. Brushing attachments – to improve the health and quality of the turf – have been utilized for decades. In fact, brushing equipment that can be attached to mowers is nearly 100 years old. However, this equipment typically comes with problems. Issues such as the attachments blocking the line of sight for the operator, time-consuming installations, and out-front pushing designs, which can chatter, have all led to frustration and dissatisfaction from superintendents who utilize the important application of brushing turf in their practice.

In 2016, Hine, the Superintendent at the Boston Golf Club, decided to do something about this. Hine, who was originally on Gil Hanse’s design team when the course was built in 2003, realized significant improvements could be made to this application. And, motivated by the need in the industry, he went to work designing prototypes.

“My goal was to develop a solution and invent a turf brush that was simple, gentle, and so convenient that I could use it at will,” says Hine, who employs his whole family, including his daughter and young boys, in the TurfTrainer enterprise. “I’m a big believer in brushing. There are times when verticutting or grooming is too aggressive and unnecessary. Furthermore, I didn’t want the brush to create any encumbrances or added tasks for my equipment technician. I also noticed that many brushes that were positioned out front were causing visual impairments for the operator, including blocking some mower lights. So I went to work to try to solve these issues.”

After building a number of prototypes in his shop, Hine eventually had a design that was satisfactory. “It took several prototypes and a long patenting process, but I ultimately reached a design and a product with which I was happy, says Hine, who also worked at the prestigious Winged Foot Golf Club in his early days in the turf industry before signing on with Gil Hanse’s design team. “After sharing our product with several close colleagues in 2017 and receiving their very positive feedback, we began selling my brush in 2018 under the trademarked name of TurfTrainer. And, as was expected, things have been moving along quickly. This is a product made by a superintendent for superintendents. It makes a difference when someone truly understands, through years of first-hand experience, what the exact needs are when designing a niche product.”

“Many courses, including here at the Boston Golf Club, will use it after core aerification as well,” says Hine. “First we use the Original Green Sweep to loosen and work the sand into the holes. We then come back with the TurfTrainer on our walking mowers set at a higher bench height to keep the bedknife out of the sand. The mat works the sand further into the canopy and the taller leaf blades are clipped off earlier in the recovery process. We notice an increase in turf density by opening the canopy allowing more turfgrass leaves to occupy the space. Intuitively, getting more sunlight deeper into the canopy makes good sense.”

Ultimately, it’s the end result – better greens! – that makes the TurfTrainer a popular choice for turf industry professionals. (Currently, there are 180 courses that are using the product. And that number is growing steadily.) “We have found that the quality of cut with the TurfTrainer brush engaged is significantly improved,” says Hine. “The cut is more uniform and the ball rolls truer on the greens. And there aren’t many golfers out there who would complain about that.”

While the TurfTrainer was initially designed specifically for walking greens mowers, the expected demand and success of the product has resulted in plenty of expansion and development. Brushes are now available and widely used for triplex mowers of many makes and models. And, not surprisingly, in addition to brushing greens, many courses are brushing tees and approaches as well.

The TurfTrainer brushes can also be used with fairway units. However, because they attach to the grass-catching buckets, the clippings on these units will also need to be collected in this particular application. “We are currently working on an adaption for fairway units without buckets,” says Hine. “And we look forward to making that available in the future.”

Regardless of what applications are used and the frequency of use, the benefits – and the accolades! – of the innovative TurfTrainer are obvious. “I really appreciate the ease of installation and the storage for this unit,” says Patrick Sisk, the Superintendent at the Longmeadow Country Club in Massachusetts. “We save a lot of time and can brush more often because the operator can easily engage the brush.”

“It’s a wonderful product because it’s not too aggressive,” says Robert Ranum, Superintendent (retired) at the Atlantic Golf Club in New York. “It’s lightweight and easy to put on and take off. It’s a must-have in your toolbox!”

Indeed, from harvesting poa seed in spring (a benefit that has been cited by a number of superintendents that utilize the TurfTrainer) to training and conditioning the grain of the greens consistently over time with repeated use, brushing turf is an exercise that any superintendent would be wise to consider. Because, as we all know, employing the odd “trick” can serve you, and your course, very well.