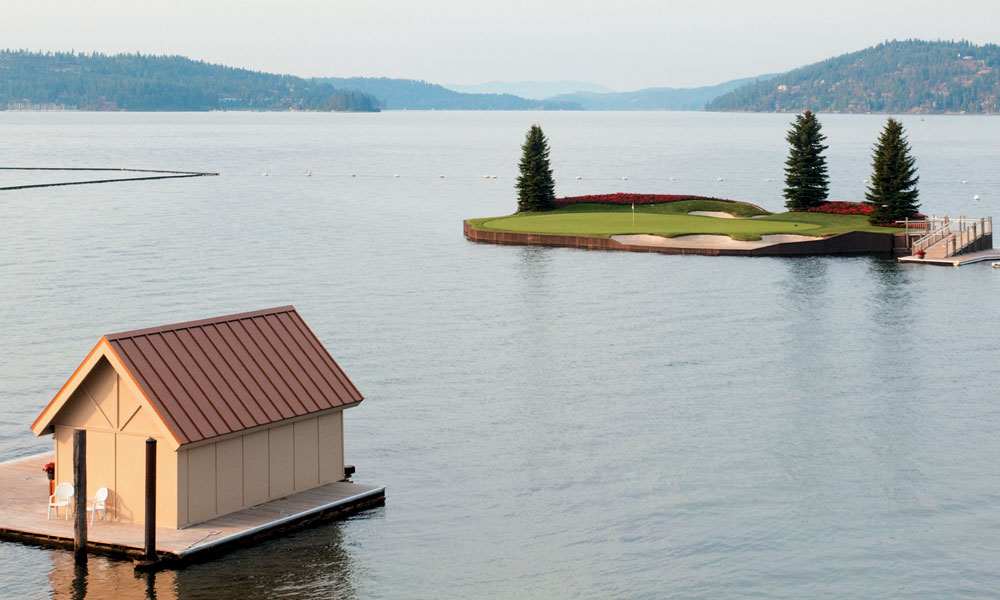 The shot requirement is simple enough: a high-flying mid-iron to a green completely surrounded by water. Been there done that. I strike it solid and my ball lands on the surface, some thirty feet from the pin. Besides the fact that I’ve actually hit the green, nothing seems all that unusual. Except for the fact that there is no path to reach the green.

The way I see it, I’ve got two options. 1) I can swim. But considering I’m a sinker, I’m not fond of this option. 2) I can trudge down to the dock and have Captain Blackbeard take me to the island on his electric boat. Considering there might be cold beer on board, this is the option I choose. 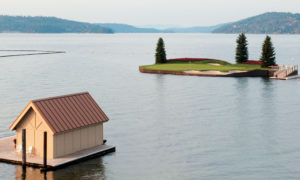 The par-3 14th at the CDA Resort
Andrew Penner Photographer

Indeed, when the floating green – essentially, the 14th hole – was built at the Coeur d’Alene Resort in 1990, plenty of heads were turned. The iconic green, which can be pulled around via a computer-controlled cable system, was an architectural first. The luxurious resort – and, specifically, this instantly recognizable hole – had the entire golf industry buzzing. And, to this day, the green remains an iconic symbol of the fabulous Coeur d’Alene Resort.

But, as cool and unique as it is, the floating green at Coeur d’Alene hardly owns the patent when it comes to strange, eclectic, or unconventional golf holes. Golfdom is full of them. And they come in all shapes and sizes. While island greens – a do-or-die target – always seem to pique our interest, holes of ridiculous length, off-the-charts elevation change, deadly hazards, and more, are documented in many far-flung places.

Take the 19th hole at South Africa’s Legend Golf Resort. It’s 690 yards. Not completely crazy, I know. But it’s a par-3. The tee is over 1,000 feet above the green on the summit of a wind-blasted mountain. The only way to reach the tee is via helicopter. (I’m not making this up.) Apparently, 15 people have actually scored a birdie on it. And, no, it’s never been aced.

Yes, without a doubt, off-the-charts, ear-popping elevation change is going to get people talking. And probably more so when it comes on a “serious” hole that is actually part of the 18-hole routing – not just a pricey option for a crazy, post-round adventure.

One of the most dramatic down-the-mountain holes I’ve played is found at Hyde Mountain Golf Course in Sicamous, British Columbia, Canada. Designed by prolific Canadian architect Les Furber, the par-4, 4th on this scenic mountainside track drops a whopping 260 feet from the tee to the minuscule fairway, which looks like a thread from the lofty perch. Hitting the fairway is about as difficult as winning the lottery. I’m not convinced that there isn’t another hole out there that boasts a bigger plunge, but I haven’t encountered it. 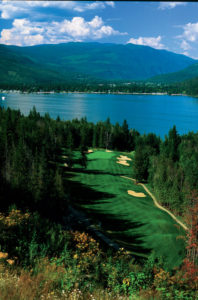 Looking down at the fairway from the tee at the 4th hole of Hyde Mountain Golf Course in Sicamous, British Columbia

Besides dizzying elevation change, extreme length is always going to get the masochists – or hackers afraid of shooting a million – talking. These days, of course, given equipment advances (which, sadly, are benefiting professional players way more than the weekend warriors), 500-yard par-4s are “normal.” And 600-yard par-5s are a dime a dozen. No, to really get heads turning, we need to add another digit.

Enter the stupid-long 3rd at the Gunsan Country Club in South Korea. It’s a par-7 that measures, get this, 1,097 yards from the tips. Considering that’s basically three quarters of a mile, this sick pup is definitely not made for beginners…or bunters.

Interestingly, another par-7, an evil, 964-yard concoction in Satsuki, Japan, held the record for a quite sometime before it was broken in Korea. And the longest hole in the United States, you ask? The 841-yard par-6 at Meadow Farms in Locust Grove, Virginia appears to top the charts. Incredibly, there is a verified account of a Daly-ish player recording a double-eagle three on this hole!

Although there are other examples of unconventional “monsters” – I counted at least a handful of par-6 holes in North America – these are exceedingly rare. Incidentally, the longest par-5, according to the USGA, is the 725-yard 9th on the North Course at The Gallery Golf Club in Marana, Arizona.

When dissecting the “extreme” theme in golf course architecture, bunkers have to be part of the conversation. After all, massive pits of score-wrecking, tear-inducing carnage are so much fun! So, without further ado, the biggest, highest, meanest bunker on the planet has to be the Himalaya bunker (it’s really a massive sand dune) on the par-4 6th on the Church Course at St. Enodoc in Cornwall, England. This beast of a trap is 75 feet high – that’s about six stories! – and guards the hidden green beyond. Hit it in there and you may as well pack a lunch, towel, and umbrella.

As far as sheer number of sand traps, Whistling Straits in Michigan, which has hosted a number of major championships, is the trump card. The course itself boasts 1,012 sand traps. That’s, on average, 56 sand traps per hole. The hole with the most? That would be the par-4 8th. It has 109 pits of doom.

Interestingly, this was where Dustin Johnson, on the 18th hole (which only has 96 bunkers), made his fateful decision to ground his club in what he thought was merely a trampled, sandy area and not an “official” hazard. Bad call. Just like hitting it into the Himalaya bunker. Or hitting a choke-down 8-iron off the tee on a 1,000 yard hole. Or swimming to the island green at the Coeur d’Alene Resort.