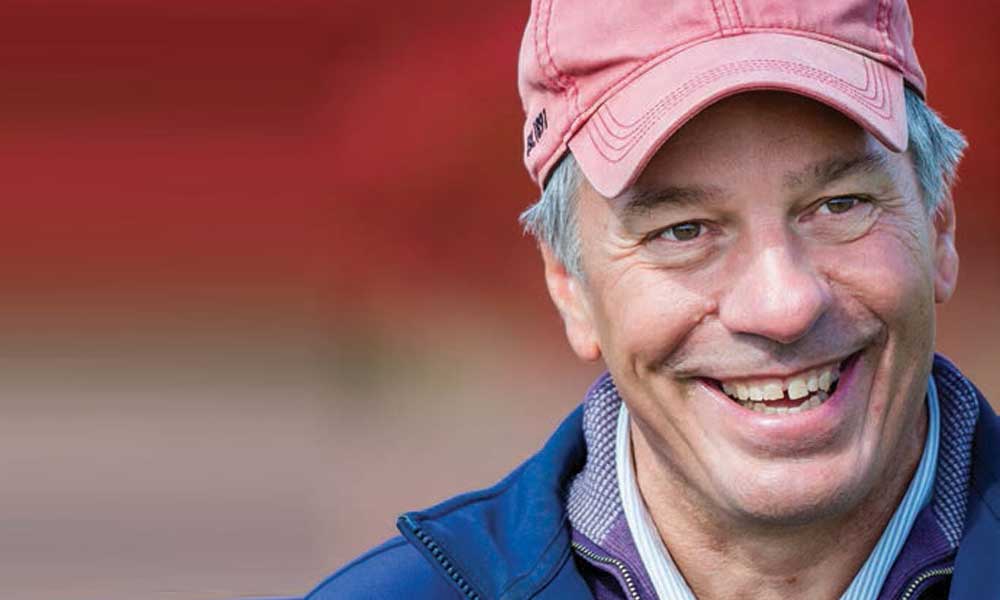 Tom Doak has been thinking about building a fully reversible 18-hole design for more than twenty years. Once Forest Dunes Golf Club owner Lew Thompson committed to the concept last year, he had to start thinking about not just how to make it work, but how to make the two options equally interesting for golfers.

After all, he borrowed the concept from The Old Course at St. Andrews, and there’s not much demand to play The Old Course backwards these days. Holes like the famous Road hole [the 17th] and the par-3 11th are so iconic that no one wants to miss them.

So did that mean he had to dumb down his design? “No,” Doak smiles, “we just had to make sure that the best of the holes are distributed relatively equally between the two loops, so that one version of the course doesn’t trump the other.”

Now that the full 18 holes in Roscommon, named The Loop, are completed with the grass growing in, Doak said he’s confident that the course works well both ways.

“I’m really pleased with it,” he said. “I’ve taken a few people out in the last month or two to walk through it in both directions, or play a few holes. Whichever way you’re playing, it never feels like you are going the wrong way.”

In the end, the success of the design rests with the greens. “It’s almost like they have to be approachable from 360 degrees around them, which limits how crazy you can make any contours,” says Doak’s lead associate for the project, Brian Slawnik. “But when you build a really interesting green, both of the holes playing into it become outstanding.”

Doak said the reversible format also gave him the opportunity to experiment with designs of famous or favorite holes he incorporated in some of his courses.
“I will occasionally build a hole to pay homage to something I’ve seen somewhere else,” he said. “For instance over the 35 courses I’ve built, I think I’ve built a version of the Redan hole from North Berwick Golf Links four or five times. This course has a green somewhat like that too, the 4th hole in the counterclockwise routing.”

“Clockwise, that green comes at the end of the longest par-4 on the course. Most of it slopes toward you on the second shot, but it also tilts pretty strongly from left to right. If you bail out to the left on your approach, it will be a very tricky little shot to keep it on the green from over there because of the tilt.”

“There are probably two or three greens when you are playing them in one direction you will think, ’Oh yeah, I’ve seen some version of this green somewhere before,’ but part of the reason I used those greens is because I realized they would be interesting if you played them from a different direction,” he said.

Doak’s view is shared by the one observer who counts the most in this instance, owner Lew Thompson of Huntsville, Ark., Thompson said he is impressed with how well the course turned out after playing holes on both routes.

He said higher handicap golfers will especially appreciate the wide fairways that will keep stray shots in play. Thompson said he expects some holes to be ready for play early in the summer with both directions open by August to limited preview play. The Loop will alternate the course routing on a daily basis allowing golfers to play each direction on back-to-back days.

“We got the best of Tom, and I don’t say that to offend people who have used Tom in the past, but we got Tom at a time when he didn’t have so many projects going, and with this one (near his home) he was able to devote much more of his time to this project and it is really showing,” Thompson said.
Doak said designing greens at Forest Dunes was easier than locating tees since he had been mulling the reversible concept for so long he has a playbook in his head of ideas that would work and ones that would not.
“There are certain kinds of greens that we would not build at Forest Dunes because it would be harder to make them work from two directions at the same time,” he said. “When you are shaping and thinking about two directions it does make it trickier but we already had ruled out the things that would get us in trouble.”

On half of the holes players will approach the greens from straight in one way and then from 90 degrees or 120 degrees rather than straight in from the back of those greens.

Constructing tees took more thought, he said, because his routing has multiple changes in direction.

“You will be playing one hole, say west, and you will turn and play south for the next hole,” he said. To make that seamless, some tees, are in fairways or just on the edge of fairways. It’s still efficient, because the tees only need to be half as big for each direction — the sizes are based on the amount of traffic they have to handle.”

Doak sai d a big factor in how the course turned out was the contributions of his three top associates at Renaissance Golf Design, Brian Slawnik, Brian Schneider, and Eric Iverson, who normally are scattered around the globe working on multiple Doak projects.

“Brian Slawnik ran the job and was there most of the time and Brian Schneider and Eric Iverson took turns coming in to shape,” Doak said. “There were only about three days when all four of us were on site but generally two of them were there whenever I was there. When we only have two projects going at a time that’s how it works.”

Doak said having that many eyes on this particular project was a big boost.

“It would have been harder to tackle this idea if I were doing it just by myself,” he said. “Having different guys looking at it instead of just one of them you get some fresh ideas, and you don’t make any mistakes. It took some of the pressure off me. I could think more about being creative than making sure we don’t make a mistake.”