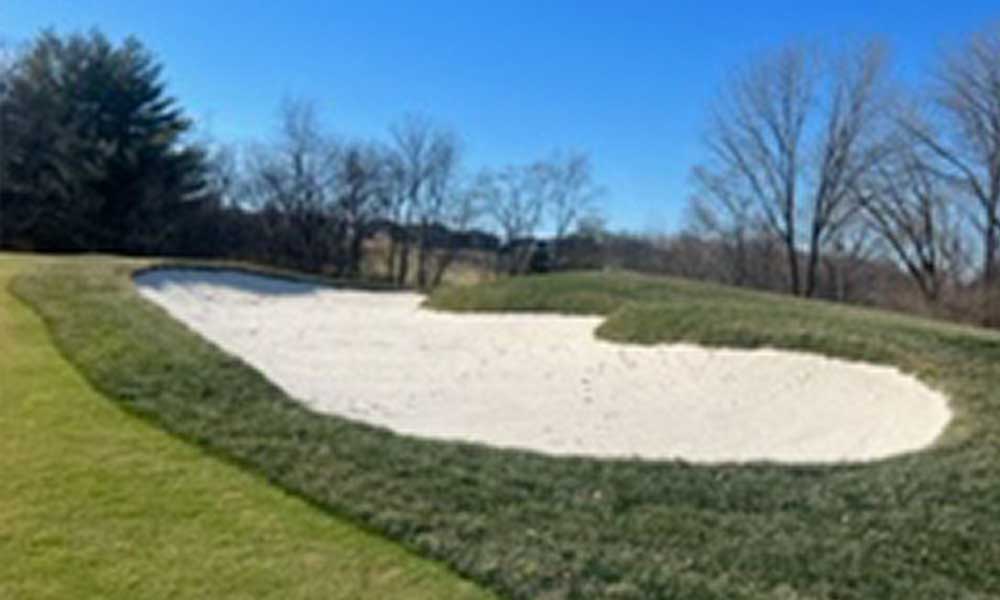 The Echo Valley Country Club has just completed installing the Capillary Bunkers liner on all of its 27 holes, and head superintendent Ryan Lux says he is delighted with the results.

Echo Valley was founded in the 1960s, and its initial eighteen holes were designed by architect Larry Packard. More recently, North Carolina-based architect Rick Robbins added the Ridge nine. But, according to Lux, the time had come to pay some attention to the course’s bunkers.

“Before we started this project, we had 76 bunkers on the property and maybe five per cent of them drained properly,” says. “It wasn’t the actual drainage tile – that was working fine – but layers of sand and silt were preventing the water getting into the drains in the first place. I had done some digging in our older bunkers, and the layering of silt, contamination and other stuff was obvious. Our labour costs were excrutiatingly high and it would take eight or nine guys three days to get the course back into condition after a significant weather event.”

Lux and the club management concluded that a bunker renovation, and the installation of a modern liner system, was needed, and after a review of the market, selected the Capillary Bunkers liner technology. “We figured our best bet was to do something that would last, and we really liked the ten year warranty that Capillary Bunkers offers – it gave us a lot of confidence in the technology,” he says. “Through talking with other people, we found that there were very few problems that people had had with it. We wanted it to be top-notch. We were going with the best sand we could find and we didn’t want contamination.”

The first nine holes, the Vale, was completed in October 2021. The second nine, the newer Ridge, started construction late this April and was done by mid-July. On the final nine, the Creek, Lux and his team decided to rebuild the bunkers completely; the work began in July and finished in October.

“Since doing the work, the improvement is huge, and obvious,” he says. “Before, the washing we were getting was just terrible. The worst weather we have had since has been three inches of rain in about nineteen house, and what I have seen is that we’re not repairing bunkers any more. Now, one guy can go out and it’s a half hour job to fix the bunkers. The liner system will pay itself over the life of the ten year guarantee, easily.”