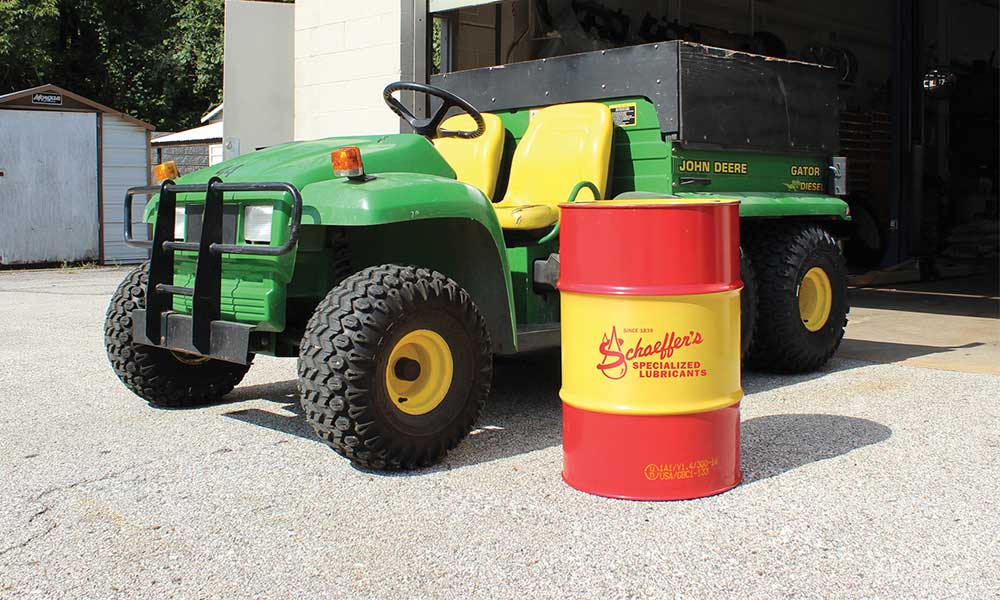 Lubricants are the first line of defense against contaminants, oxidation and wear. They’re designed to separate moving parts, transfer heat and remove contaminants safely to a filter where they can be removed or to a sump where they pose less of a threat. The challenge with dirt and water is that they come from both the operating environment and the equipment or system’s operation.

Using filters and monitoring equipment can help keep dirt and water from getting into your equipment. A strong preventative maintenance routine certainly helps. In addition to those measures, using high-quality lubricants can help mitigate the effects of common contaminants.

Not all lubricants are created the same. They’re limited by their base oils—the single largest component found in lubricants—and the other performance additives in them. It’s the quality of the base oils that affects how long the lubricants can last. Because dirt and water are common contaminants, their presence is often taken for granted.

Engine oil is able to handle a certain amount of water. It grabs onto the water and emulsifies the water into the sump so when the engine cools, it can be burnt off when the engine starts. That’s why you see water droplets on exhaust pipes when the vehicles start-up.

Condensation, coolant leaks and combustion can cause water to be present in engines:

When there’s a gross contamination of water, it will sit at the bottom of the oil pan and at startup, the water gets sucked up instead of the oil. The ripple effect begins. Excess water causes viscosity to increase. Water has a component of oxygen, and both accelerate oxidation. Oxidation disrupts the oil’s ability to lubricate properly—the oil thickens and doesn’t flow easily. Components are left vulnerable at startup, and the engine is subjected to excessive friction and heat.

Regular oil analysis that includes a crackle test for water will detect contamination. A positive crackle test will be followed by a check for sodium potassium, antifreeze and glycol. If a contamination is detected, it’s a good idea to take another sample and check on how the equipment has been operating. It could be the sample was taken from a dirty container or work was done on the engine. A second sample will help you analyze what’s really going on.

On the other hand, dirt gets in the engine through the air induction system or air filter. Engines have a variety of breather elements, and they usually all have a filter in them. All it takes is a clogged filter, a broken filter or a filter that wasn’t installed properly to introduce dirt into your engine.

Dirt is abrasive in engines. Depending on the size of the dirt particles, it will start wearing on cylinders, pistons and rings. It attacks iron first, but if there’s a gross contamination, it can form sludge, thicken the oil and attack the bearings.

Dirt mostly contains silicon or silica; however, when the oil sample shows high silicon, it may or may not mean you have abrasive contamination. If the analysis doesn’t show iron, then the silicon could be from gaskets or seals found in a new engine or recently replaced seals or gaskets in an older engine. However, if you do see high silicon in conjunction with iron, that would indicate ring, liner and piston wear; the silicon is abrasive and it’s likely coming in from the air intake system.

Engine oil is designed to protect, but it’s also intended to sacrifice itself when contaminants are present. Oil is expendable; it can be replaced easily, and you can condition it to last longer with filters and by monitoring. The longer the oil can withstand dirt and water, the longer it will protect the engine. Performance additives are certainly helpful, but it’s the oils base stocks that make the difference. When you use an oil with better base stocks, it will naturally last longer because it’s more resistant to oxidation. The oil will withstand contaminants better, which will allow for better performance and longer engine life.

Unlike engine oils, hydraulic fluids are designed to demulsify and shed the water so it can be drained from the bottom of the reservoir. Engine oils allow water to be burned off, but hydraulic systems shouldn’t run that hot, so the water needs to separate from the lubricant.

Hydraulic systems operate by pressurizing fluid, and in doing so it compresses entrained air and the moisture from the humidity in the air is squeezed out. Even though technically there’s no air in lubricants, air still gets in through the hydraulic system’s breather element—the fill cap. That’s why it’s a good idea to use desiccant filters to prevent moisture contamination.

When water doesn’t emulsify with the hydraulic fluid, the same ripple effect that happens in engines is triggered in the hydraulic system. The lubricant oxidizes, viscosity increases, varnish forms and wear occurs. In hydraulic systems, varnish is the enemy; it clogs up the pumps, valves, cylinders, solenoids and filters, and it will gloss over temperature sensors. Performance wise, the system will have sluggish controls; it’s not going to compress the same. Visually, the lubricant will look milky. If you can see water in the reservoir or sight glass, then you’re well over the condemning limit—it’s gross contamination.

Proper storage of new lubricants, use of desiccant breathers on intakes and routine preventative maintenance to drain excess water will help minimize the water contamination in your hydraulic system and extend lubricant and equipment life.

For dirt and hydraulic systems, the challenge is where the system is located and its surroundings. Dirt is going to be a constant contaminant you’re trying to minimize. Working in a mine or construction site? Dirt, dust and other debris will cause abrasive wear in the system, affecting performance over time.

Dirt is abrasive, and it causes wear on internal components. Oil analysis is the best way to keep an eye on what’s going on in your system. But remember, it’s only going to tell you wear is happening; it’s not going to tell you which component has wear. You won’t know the extent of the wear until your system starts making noises, is sluggish or overheats.

If your hydraulic system experiences high temperatures, having dirt present in the system only makes matters worse. High heat plus dirt particles accelerate oxidation, which leads to varnish.

Using high-performance lubricants with synthetic base stocks with performance additives will help withstand the effects of contaminants:

Gears are highly susceptible to abrasive wear caused by work-hardened dirt and other debris. Gearboxes have the least protection when it comes to water and other contaminates in the system. Other than transmissions, it’s rare to have a gear box with any sort of oil filtering device. So once a contaminate is introduced, it will remain until the next oil change. To prevent contamination ingression, basic protections should be utilized. Breathers and covers should always be secured in place, and seals should be in working condition. If a gearbox is expected to encounter significant amounts of water a desiccant breather should be used. When changing fluid, the area around the fluid entry point should be kept clean. When adding oil, a clean oil meeting OEM specification should be used.

Gearboxes are subjected to long periods of severe mechanical action. Using a high-quality lubricant that offers strong oxidation stability will help keep bearings and gears protected if contaminants are present.

Lubricants with polyalphaolefin (PAO) base stocks are non-polar, allowing them to absorb less water in applications that run under high humidity or high-water conditions. They separate condensed water much faster and more completely, allowing water to be easily removed from the system.

Related: Is Your Maintenance Staff Equipped for the Job at Hand?

Contaminants can also enter fluids or systems just from how your store and manage your fluids.

Ideally, lubricants should be stored indoors in a climate-controlled environment with all caps on, and barrels on their sides with bungs at 9 and 3. Each lubricant would have its own clean and clearly labeled bottle or dispensing bottle.

How lubricants are stored or used does create another entry point for dirt and water. To minimize contaminants during storage, keep your lubricants away from the processing area. Anything you process, whether it’s cheese or dust from plastic injection molds, can collect on lubricant containers. As soon as the containers are opened, the fluid is exposed. The same is true if you’re working at an off-road job site. Don’t keep excess lubricants on hand or in the truck where dust, dirt and water can collect on the barrels or containers.

Barrels should be stored on their sides instead of standing upright, which allows water and dirt to collect and sit on top. As soon as a barrel is open, that water or dust can get into your fluid even if you try to wipe away the contaminants. Water doesn’t have a place to collect if the barrel is stored on its side.

Keep track of bung caps and vent caps. They get lost easily, and someone shoves a rag in the bunghole or breath covers. This is particularly problematic because the rag might already be dirty. Barrels also experience ‘drum popping.’ The barrel itself will breathe because the air inside expands and contracts with the temperature, making a popping sound. If the barrel isn’t sealed properly, the drum popping will pull in any contaminants that may have collected on the container.

Look at the lubricants you have in inventory. Don’t buy more volume than what you’re going to use in a year. It’s hard to pass up a good deal on lubricants because they do have a long shelf life, but that means more barrels to store and manage.

The bottom line on lubricant storage and management: Just do it. Even the best lubricant you can buy isn’t immune to poor storage conditions or management.

For more information about how high-quality lubricants can protect your equipment against contamination, please visit www.schaefferoil.com.

Repositioning the Golf Club: How Tiered Membership Can Capture New Revenue and Appeal to a New Generation
Jim Pavonetti Superintendent of Fairview Country Club
To Top