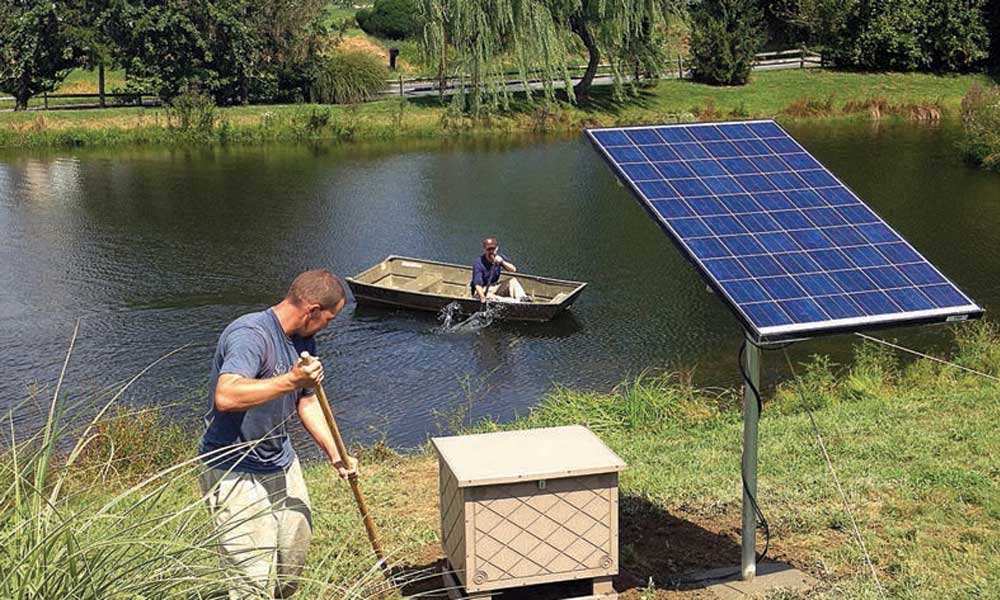 Since ornamental and irrigation ponds are such common features of golf course landscapes, most golf course industry management professionals also have a working knowledge of managing aquatic resources. Most managers are also aware of the various benefits of mechanical aeration for their ponds and lakes. Since dissolved oxygen is the most critical water quality parameter affecting the overall health of a waterbody, we recommend aeration to most of our clients for long-term water quality improvement. In general, aeration encourages the growth of beneficial bacteria, which compete with algae for nutrients and accelerate the breakdown of decaying organic matter. Aeration also discourages thermal stratification and helps ensure adequate oxygen levels throughout the water column. Adding an aeration system to a pond will increase the dissolved oxygen level, reduce the effects of nutrient loading, and prevent the release of toxic substances from the sediment into the water column. A pond or lake with adequate aeration is less prone to harmful algae blooms and provides a healthy environment for warm water fish and other aquatic organisms.

One of the most common approaches for mechanical aeration is the submersed diffused air system. This type of aeration system utilizes pumped air to de-stratify the pond and to increase the dissolved oxygen level throughout the water column. The typical configuration involves an air compressor that is located on the shore, which pushes air through subsurface tubing to one or more diffusers situated on the bottom of the pond. The membrane on the diffusers fractures the air into tiny bubbles that are released into the water. As the bubbles rise to the surface, they carry the hypoxic (low oxygen) bottom water upwards, where it is mixed with the more oxygen rich water at the surface.

Submersed diffused air aeration is most effective in ponds and lakes with depths greater than 6 feet. The air bubbles rise from the diffuser to the surface in a cone-like configuration that is broader at the top. In deeper water, the air bubbles have more vertical distance to spread horizontally, so a greater portion of the water column is circulated than it would be in shallow water. The constant vertical mixing brings the most impaired water near the sediment-water interface into contact with atmospheric oxygen and allows harmful gases to be released into the air. And since the dissolved oxygen level will eventually increase near the bottom after aeration is installed, the release of many harmful substances from the sediment is prevented.

Diffused air aeration systems are less expensive and more energy efficient than surface aeration systems (i.e., floating fountains and surface aerators) both in terms of the initial investment and the long-term operational cost. Additionally, these systems cause very little surface disturbance, which can be attractive in golf course situations where a smooth and quiet pond or lake is desired.

Although diffused air aeration systems are more affordable, many of our established golf course clients find that the cost to bring electrical service to the edge of the waterbody can be cost-prohibitive. Electrical service can be especially problematic for golf courses where trenching to install power lines and conduit would cause severe damage to the turf, especially under or around greens, tee boxes, and fairways, and would entail significant restoration costs. It also adds significant cost to the project when boring under cart paths is required. In these situations, solar powered aeration systems may be the ideal solution.

While surface aerating fountains require too much amperage draw for a solar option to be feasible, there are several manufacturers that have developed solar submersed diffused air aeration systems. The configuration of the solar systems is similar to that of the traditional electrical systems, except that the compressor derives its power from solar panels instead of an electrical power source.

The first solar aeration system became available on the market in 1998, and an evolved model by the same manufacturer remains available today. Their set-up includes a battery back-up system that provides the capability for the compressor to run for 20 hours per day and for up to three days without any sunlight. This configuration is unique to the market and is patented to prevent replication. The diaphragm compressor is durable and able to function at depths up to 18 feet, although it is most efficient in shallower depths between 6 and 14 feet. While this system has the longest running time among the solar aeration options, it is also the most expensive. The installed cost for a standard 2-diffuser system with 200 feet of tubing could be up to 2.5 times the price of a comparable electrical system, depending on site-specific installation conditions. The higher expense is due to both the cost of the equipment, as well as the additional materials and labor required for the installation of the solar panels.

A few other manufacturers offer what is known as a “direct-drive” solar aeration option where the compressor is powered directly from the solar panels with battery-free operation. These systems are generally less expensive than the battery reserve systems, although they are obviously more limited in the hours that they can operate. There is one system that was new to the market in 2014 that is unique in that is has a piston compressor rather than a diaphragm compressor. These systems produce considerably more air and can be used at greater depths than the diaphragm compressors, up to 20 feet. The running time varies from 9 to 15 hours per day depending on the geographic location and time of year, although it does run longer during the summer months when aeration is needed the most. The installed cost for this system with 2 diffusers and 200 feet of tubing is only about 50 percent greater than the cost for a comparable electrical system.

Although the installation of a solar system requires less infrastructure disruption than installing electrical service, one factor that may be of concern to golf course managers is the obtrusive appearance of the solar panels. The panels are large and should ideally be placed near the pond in an area with direct southern exposure and no nearby obstructions such as trees or buildings. It is difficult to effectively hide the panels without diminishing the amount of sunlight reaching them.

As with any solar powered equipment, the weather can be a limiting factor in how well the systems operate. For golf courses where power is easily accessible and installation won’t cause significant damage to the infrastructure, the traditional electrical diffused air systems remain the most reliable and affordable aeration option. However, solar powered systems may be a good choice for courses where installing electrical service is challenging and expensive, or where there is an intensified concern for environmental sustainability and “off-the-grid” operation. The reduced cost of the monthly utility bill is another benefit of choosing the “green” solar option over a traditional electrical system. However, it is important to consider the goals of the course management and players, the size, depth, and water quality of the pond or lake, and the installation requirements and operating budgets of the facility when selecting the optimal aeration strategy.