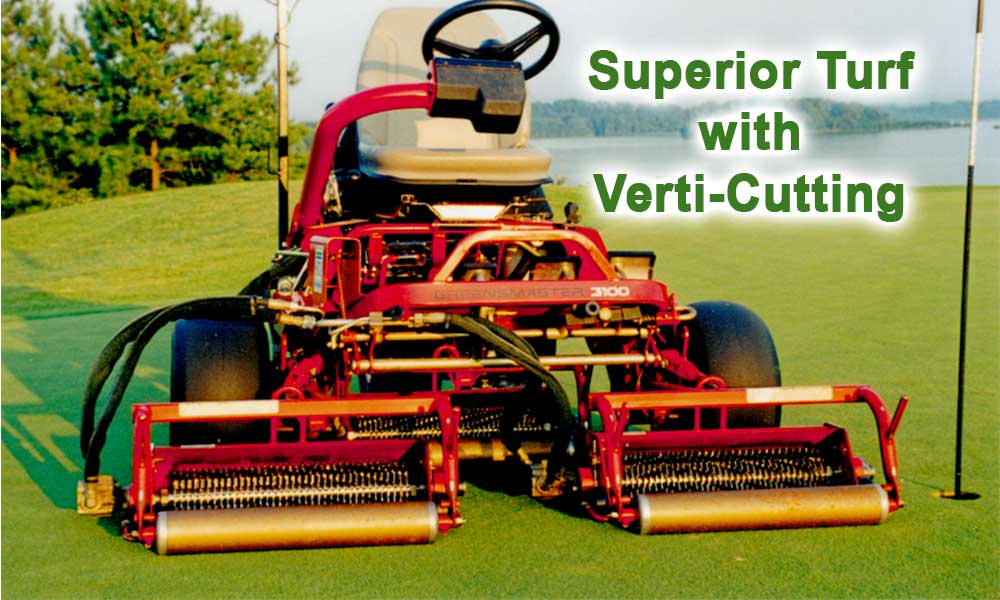 We all know that Verti-Cutting and Aerating are the necessary secrets to outstanding turf. However, Verti-Cutting is so time, labor and intrusive on a course that it’s often put off until absolutely necessary. However, and unfortunately, this practice is sometimes skipped all together.

Not all golf courses and parks departments have the vision and equipment to undertake an effective integrated fairway/open space maintenance program.

This article is not about doing away with Verti-Cutting, it is a must-do maintenance practice, but there are some methods to improve turf in-between verti-cutting or aeration coring.

Extreme Verti-Cutting with a blade is all about deep dethatching. However, it also provides:

Despite those proven benefits, deep blade verti-cutting is a huge undertaking.  A faster, much less invasive approach is a high-speed mechanical rake. Using a tractor with a hydraulic 3-point hitch or an ATV Quad, a multi-tine spring-loaded rake can quickly pull up plenty of thatch – wet or dry to improve turf quality and visual aesthetics.

Using the tractor hydraulic adjustments or even the fine adjustments on the rake itself, the operator can easily go from a deep dethatching to a light lift of turf grass surfaces. This provides much of these exact same benefits a deep verti-cutting. These results can be achieved to a slightly lesser extent with regular raking – saving you time and money:

A considerable point to note is because of the high-speed raking behind a tractor or quad, mechanical turf raking can be done in a fraction of the time and with virtually no impact on immediate play.  Golfers and managers want to see their fairways green and well-presented. Another major advantage of mechanical raking is the application and even spreading of top dressing. The vibrating tines do wonders in moving those materials down into the grass.

For those of you that are with Park districts that oversee the turf at public parks or especially sports fields, a single large mechanical rake with spring-loaded tines can cross over to virtually ALL sports surfaces as seen with these points below:

Professional sports are deeply invested in both deep blade verti-cutting and mechanical rakes. Teams including the Baltimore Ravens, Green Bay Packers, Buffalo Bills, and Cleveland Browns all use them. Baseball too, the MLB teams like the Cincinnati Reds, are just a few of the teams that are maintaining their fields this way as well as professional Soccer and major college sports programs.

Wherever you find top grounds professionals who are responsible for impeccable turf conditions, you will find verti-cutting and mechanical raking as mainstays in the pursuit of top turf health.

Tungsten carbide-tipped verti-cut blades with aeration flutes are very important in everyday turf management.   Make sure that your verti-cut blades are properly fitted to work with your OEM heads and site conditions.  Blades can be found to fit any of the major mower products from a variety of manufacturers.

Blades should be of high-quality steel, with tungsten carbide tips for durability and long use. They don’t wear down to keep your cutting depths consistent. Blades with side vents will help clean-up and raking of thatch after verti-cutting – work smart not hard!

A good practice is to retrofit an older mower into a dedicated verti-cut mower. It will save a lot of time and money to have that piece of equipment on-hand with blades mounted and set to go to work.

Verti-Cutting or mechanical raking to remove the build-up of thatch in greens is necessary for strong healthy turf and optimal playing conditions.

When to verti-cut is largely up to the geographic area where your golf course or park district is found.  Fall is typically a good time in the northern climates as it is good to remove thatch accumulation before the winter sets in to ensure a good spring growth. Across the south, you need to coincide aeration practices with spring traffic and plant growth.

Lyall is the President of Wood Bay Turf Technology with over 30 years of manufacturing turf equipment for the world of golf and sports.  They manufacture the world’s leading verti-cut blades – the dynaBLADE and the highly sought-after mechanical rake – the FDS Turf Dethatcher.

A trusted resource in the turf industry – Their direct manufacture ensures you the lowest prices and best customer service for all of your turf needs.

Salt: The Silent Battle on the Golf Course
Golf Superintendents Are Professionals Too
To Top