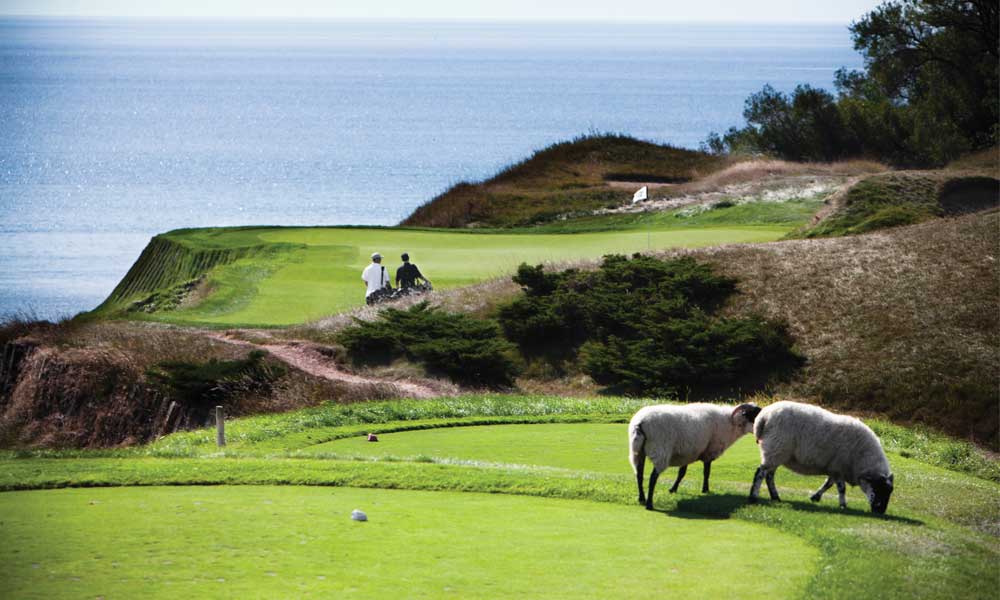 Working class Sheboygan, Wisconsin, about an hour or so north of Milwaukee, is a real shot-and-a-beer kind of town. However the blue collar city of some 50,000 souls is also home to one of the most unique and alluring vacation resorts in the country: Destination Kohler.

Among many other great amenities, including a world-class spa and five-star lodging and dining, the resort features four championship golf courses. Whistling Straits is the lakeside beauty that has been the three-time host of the PGA Championship, and will be the site of the 2020 Ryder Cup Matches. Also on property is Blackwolf Run, twice the host of the U.S. Women’s Open. In addition to this ‘awesome twosome,’ there is also the Irish Course and Meadow Valleys.

However there is much more to Destination Kohler than the golf courses, scintillating as they are. There is true history, real Americana, and a rough-hewn immigrant’s tale that has morphed into a dazzlingly opulent resort and spa.

Many know Kohler as a brand-name in plumbing and bathroom fixtures. But the company’s origins are modest. Back in 1873, an Austrian immigrant named John Michael Kohler, a traveling salesman for a farm equipment company, took a cast-iron water trough, added feet and enameled it, creating a bathtub. According to company lore, he sold it to a local farmer for a cow and fourteen chickens.

As the business expanded over time, and Kohler Company began building its new factory in the area now known as the Village of Kohler, just outside Sheboygan. Immigrants from Austria, Holland, Germany, Russia, and other locations arrived looking for work. The challenge, it soon realized, was helping those workers find housing in what had previously been acres of farmland.

Walter J. Kohler, the son of John Michael Kohler and second president of Kohler Company, undertook an ambitious project to house immigrants for just $27.50 a month, including a private room, laundry service and three meals per day. The project, a Tudor-style building he named The American Club, opened its doors to single immigrant workers in 1918. Along with a pub, bowling alley and barbershop, The American Club offered lessons in American citizenship and the English language.

The decades passed, the dormitory outlived its usefulness, and when Herb Kohler, current chairman and grandson of the company founder took the reins, he opted for a comprehensive renovation of the American Club, which had fallen into virtual disrepair. Three years after the project began in 1981, the former dorm had been reborn as a luxury inn. “I built the hospitality business with zero vision,” admits Herb Kohler. “We had one little success built on another little success, and suddenly the combination of those successes and the demand for golf became synergistic.” 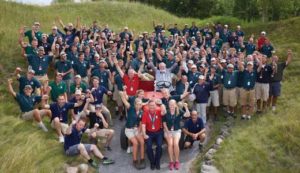 The initial course was named Blackwolf Run, after a prominent Winnebago Indian chief from the 1800s. Shortly after opening for play in the summer of 1988, there were lines outside the pro shop door. Golf-loving Wisconsinites and guests of The American Club, which for the first several years had been shuttled off to public courses, had never before had nearby access to such a beguiling venue, with its rolling terrain, woodlands, wetlands, abounding creeks and streams. Golfers found it irresistible, making the course an instantaneous hit. “I don’t know if I could ever design a course hard enough to keep dedicated golfers on the sidelines,” states Pete Dye, the architect of all four Kohler courses. “They love to dig in, fight me tooth and nail, and though they curse, scream, and call me names, that one memorable shot will always bring them back for more.”

Herb Kohler brought Dye back for more, and the coup de grace he delivered was Whistling Straits, located on 560 acres about ten miles from the resort itself. The land was a former army base, that had operated as an anti aircraft weapons firing range during World War II. Though the property was an ecological ruin filled with asbestos, toxic waste, concrete bunkers and fuel storage tanks, it also featured seventy foot bluffs rising above the waters of Lake Michigan. Though he didn’t take up the game until he got into the golf business himself, Kohler had quickly developed an affinity for links golf, whose roots are in the seaside courses of the United Kingdom. “I want this course to look like it’s in Ireland,” was the directive handed down.

By the time Dye was done conjuring the flat landscape, employing forty years of cunning and experience, an armada of earth movers, and 13,000 truckloads of sand imported from area farms, the wondrous creation was still hard by the shores of Lake Michigan. But it looked as if it were sitting on top of the Irish Sea. To heighten the Eire illusion, Kohler imported a flock of blackface sheep that roam the golf grounds along the lakeshore unencumbered, adding a uniquely appealing touch.

Michael Lee is the manager of golf course maintenance at Destination Kohler. He oversees a staff of two dozen full time employees, about 125 seasonal workers and nine hundred pieces of equipment. He’s tasked with a complicated job, with numerous moving parts. “Operations are set up with dedicated staff and equipment for each course,” explains the 23-year veteran. However to prepare for special events such as championships, large group outings and aerifiying, staff and equipment are moved as needed.”

All told the senior maintenance staff at Destination Kohler has more than ninety years of experience. All that experience is imperative, as the varied topography and different playing surfaces require a variety of maintenance practices. Blackwolf Run and Meadow Valleys are sprigged with Creeping Bentgrass, have A4 greens, Memorial fairways and tees. KBG is the grass of choice in the mowed rough, fescue in un-mowed rough. Whistling Straits uses fescue and a Poa annua mix on the fairways, while it is Bentgrass on the Irish Course fairways, Creeping Bentgrass ( Providence) on greens and Penncross on tees.

“Whistling Straits has over a thousand bunkers and dunes. Blackwolf Run has about seventy. Whistling Straits is colder than Blackwolf Run due to its lakeside location. Both have dramatic elevation changes that require careful maintenance practices,” continues Lee. The staff has another responsibility: The care and maintenance of a flock of blackface sheep, which roam the grounds at Whistling Straits. “The sheep require basic livestock care in terms of feeding, shearing and locking up in pen during the night for protection. Other than that, they have their routine of making their way through the golf courses looking for food, shelter and shade mostly in the out-of-play areas.”

The sheep love their home, hard by Lake Michigan. In that way they’re no different than thousands of visitors from around the nation and around the world, who come to Destination Kohler for the fine dining, world-class spa, luxury accommodations, unique shopping, and of course, for the superb variety of golf.