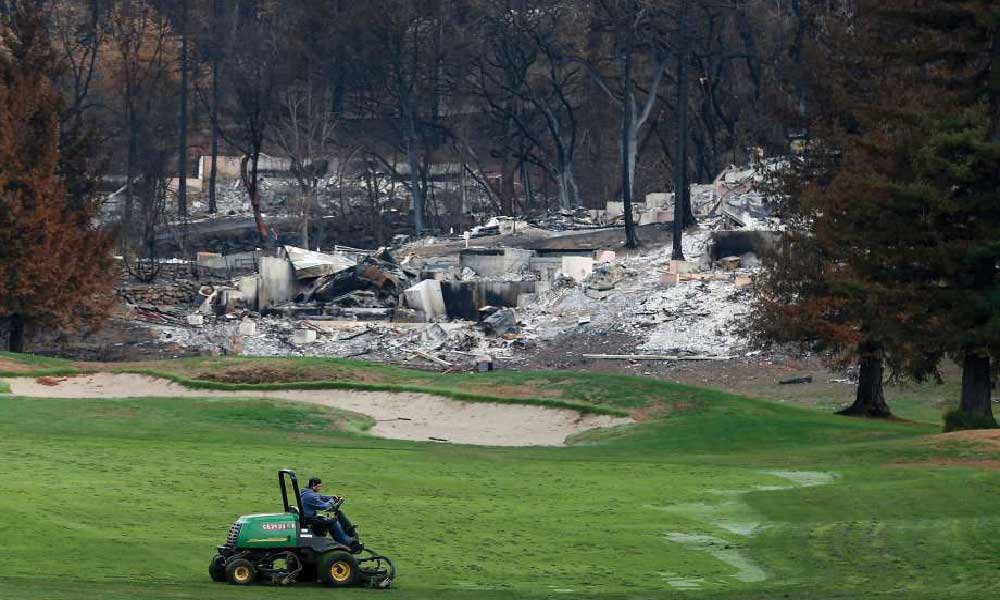 Wild-Fires (WF) impact communities far out of proportion to damage suffered to property. As many modern systems, the scope of WF causation and effects is very broad, encompassing multiple sectors and disciplines. Golf courses (GC) have a unique relationship to WFs so their managers must have accurate information to be diligent. Facts about modern WFs differ from commonly held notions, which affects planning. Most plans tend to stop at the property line, with GCs being no exception. Ultimately, the best WF defense is a good offense.

The EPA maintains a century of data on climate and WFs. Climactic changes since 1920 have seen an increase of 2-3 degrees(F), with similar rainfall. The atmosphere has more carbon dioxide which increases forestation and undergrowth. Acres burned by WF peaked in the 1930s, diminished sharply through 1950, then crept upward steadily. Annual acres burned are still only 20% of the 1930s peak. Before 1920, we have anecdotal information but insufficient hard data for accurate comparisons (e.g. Idaho’s Big Burn in 1907).

The Dust Bowl from 1934 to 1940 affected 100 million acres. Poverty-stricken families traveled West as the soil blew East over the Atlantic. Perhaps 1/8th of California’s population today stems from ‘Okie’ migration. Over-plowing in virgin prairies during drought was the main cause, with losses of about $25 Mil per day in 1934 dollars.

The total number of WFs each year has remained at an ostensible 82k count. Annual severity has increased 150% compared to the 1950s trough. This is likely due to development patterns, as we now build on lands that were off-limits a century ago. As WF Frequency (Occurrence + Length) has gone up Treatment goes down. Since 2016, Treatment has decreased to ‘0.0’ statistically.

WF season lasts about three months longer compared to the 1950s; budgeted funds are exhausted halfway through the fire season in many states. Firefighters are as brave today as 100 years ago, being the second most stressful job in the US based on a 2012 study.

Here are WF stories and concepts that suggest a broader picture:

The Barefoot community of Myrtle Beach experienced a WF in 2009 that devastated the town. The GC survived due to the general watering of greens leading up to this surprise event. This was one of the worst fires in Florida history. It came like a thief in the night and then disappeared. Florida is a humid environment.

Erin Kelly is a scientist that was doing studies in Jasper National Park when a WF hit in 2000. This is a remote location in the Canadian Rockies. Increases in Nitrogen and Phosphorus in the water matched expectations. But she also found Mercury rates in fish increased 500%.

Monika Emelko is a Water Treatment and Forestry Management expert. She has demonstrated that Dissolved Organic Carbon in WF runoff combines with water-treatment chemicals. The compound is a carcinogen that is not filtered by standard practices. The modified cost to treat can double costs for affected water districts.

Fernando Rosario-Ortiz is an associate professor of Env. Engineering at U of Colorado. His models predict that every district that draws from a forested watershed will experience severe WF runoff.

In San Diego in 2003, Santa Ana Winds gusted to 85 mph, driving the Cedar Fire. This WF moved through a golf resort, as protective irrigation failed due to power loss. The native areas between holes burned, but the irrigated turfgrass resisted well. Over 2800 homes burned, scorching over ¼ million acres; 15 deaths resulted. Ranked #1 in destruction in 2003, this event is now outranked by several other California WFs, which increase in damage each year.

GCs act as a firebreak if watered well. Because power distributors shut down the grid when a WF approaches, GC plans to ‘spray the air’ fail. WF damage to grounds is often not severe; major structures account for the largest rebuild cost. The surrounding community can be devastated by the same WF that fails to cross a GC. Water features will increase in pH from ash, which will be chemically active depending on the material burned. Nutrient loading from runoff may cause algal blooms and fish kills for several years if untreated.

The cascade of effects following a WF multiplies the initial losses. Water rates increase, new toxicity affects the ecosphere, and community dislocation is only a few examples. Heavy rains dislodge exposed sediments, mixing in compounds created by extreme temperatures. Uncertainty results from slow-motion and indirect events. This can create a mental scar for a community that persists long after the damage is repaired.

A 10-year study in Montana examined how new residents would value homes with high-quality amenities. One of the factors studied was a GC near a recent WF burn. Those who did not view the burn were willing to pay more than average for a home. Those that viewed the scorched ground would pay less than average. A WF burn reduces the chance of another in that area for many years. The toxins released disperse in a few years, actually increasing health relative to unburned areas. The human response to a burn zone is likely not as much about fire safety, but a subconscious reaction to cascade effects.

Communities are now built-in Fire Hazard Severity Zones. GCs share these communities, often being the amenity at the core of development. News that “The Fire is _% Contained” sounds right to the modern ear. Government policy towards WFs is now reactive and passive. A GC should plan for its own protection, which should not be a ‘bunker’ approach. A GC could be the organizational center for a Firefighter team with an off-property focus. Today about 70% of all firefighters are volunteers, traveling to remote areas where fires gain momentum. A proactive Community Plan will attack the regional fuel source and fire vectors in the off-season. When the power fails and the flames arrive, other plans tend to fail due to surprise and unanticipated problems.

Officials are aware of GC’s resistance to fire, but may not initiate a discussion for bureaucratic reasons. The GC should take the first step to liaison with Emergency Services on power protocols, water access, and resident sheltering. Educate stakeholders before and after a WF to increase prevention, reduce panic and then enhance recovery. Build these relationships now, possibly with shared capital advantages. They will be more difficult to form after the community is scorched. No matter how severe a WF or its cascade of events, the lasting damage is fear. Education and communication are the antidotes to fear, followed by action.

Patrick Simmsgeiger is the President of DWI, a lake management company based out of Southern California. He is a Certified Lake Manager (CLM) with over 40 years of experience in the field.
contactus@dwiwater.com 949-582-5414

Greetings from the Road, Thanks for All You Do
Cimarron Hills Golf & Country Club’s Clubhouse Receives Makeover
To Top