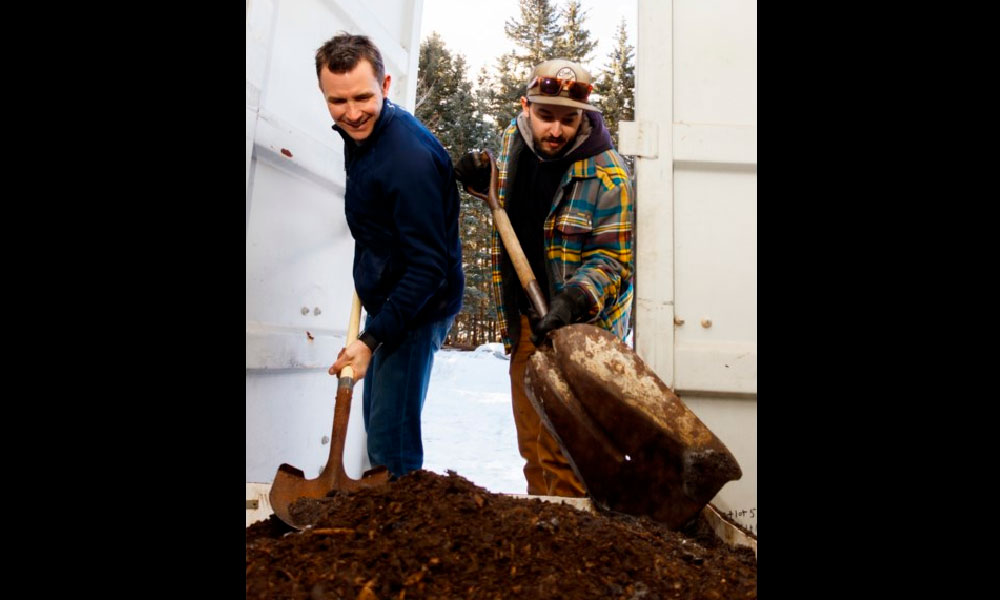 The Canmore Golf and Curling Club have wiggled its way to an environmental award after introducing a vermicomposting system almost two years ago.

The hardworking worms that make up the system are proving successful for the golf course after the Canadian Golf Superintendents Association (CGSA) announced course superintendent Reid Solodan and his team would receive the CGSA/Rain Bird Environmental Achievement Award.

“To be recognized across Canada is pretty cool,” said Reid Solodan, the course superintendent for the Canmore Golf and Curling Club.

In a press release, CGSA explained that the award goes to a golf course superintendent who has chosen a specific environmental project for their course.

“The CGSA/Rain Bird Environmental Achievement Award recognizes a member of the CGSA who has held the position of golf course superintendent for a minimum of five years and who has distinguished themselves through dedication to the profession, performance as a golf course superintendent and contributions to their profession and their community by choosing a specific environmental project, policy, program or practice that has been initiated on their course and documented the environmental impact that this initiative has had at their facility,” the press release said.

The concept itself came to Solodan and his team from a local vermicomposting specialist and urban farmer Christian Wright back in 2015. Wright presented the concept he wanted to establish at the course at a talk held by the Canmore Community Gardening Society. Since then, Solodan, and his assistant supervisor Pete Dall, have worked alongside Wright to create the vermicomposting system that lives in a large container at the back of the course. Now, years later, it’s a fully working system.

The system looks like an open bin filled with soil, food scraps and worms, complete with a mechanism at the bottom that, when used, causes the ready soil to drop to the floor. Solodan told the Outlook in September 2019 that the course started with 200 worms that have since multiplied, and using his hand to push around the soil, hundreds of worms could be seen doing their job. Essentially, the worms eat the food scraps creating “basically worm poop,” Solodan explained with a laugh. That “worm poop” is extremely nutrient-rich soil.

“It’s nice to be recognized. It’s another part of this, seeing it all come together,” said Dall.

“I don’t think we set out to win any awards for it but being recognized is pretty nice in the end… It’s nice to have something that’s keeping us a little bit more sustainable – that’s why it started. Hopefully, if anyone else wants to do it, they get into it for that reason.”

Dall explained that it’s been a trial and error type project, with each season bringing new challenges. For example, a -30C winter cold snap this season prompted Dall and Solodan to bring in an extra heating source.

“We kept them alive over the cold spell in the winter here,” said Solodan.

“We still use the heating tape, but just after the cold spell we brought a propane heater in just to thaw out some areas that were frozen to hopefully bring them back.”

Solodan explained that some parts of the container housing the worms did freeze during the cold snap, but they were able to bring them back – much to their surprise.

“Just the end [froze] but after it thawed out, we were digging in there and they’re still alive, so we’re not sure if the worms just are resilient, or if they freeze and come back,” he said.

At this point, the two have no plans to expand the project, but they have been receiving inquiries on the system from other golf courses across the country.

“Hopefully we can sell it to other golf courses out there just so they can reduce the carbon footprint, help the environment,” said Solodan.

In addition, Solodan has been asked to speak on the system at conferences, but he said it’s “Pete’s [Dall] project.”

“What Pete’s done over the process, it’s Pete’s project, I’m here to support him,” he said.

“I thank Pete for what he’s done and obviously the Canmore golf course, what they’ve put into it.”

Both were modest about their efforts, with Dall saying it’s been a rewarding process.

“To be able to see it all come together is cool,” he said.

“We keep trying to improve the end result so no major hiccups, but as we see things that can be improved, it’s nice to have the support. We don’t spend a ton of money but if we need something, we get it.”